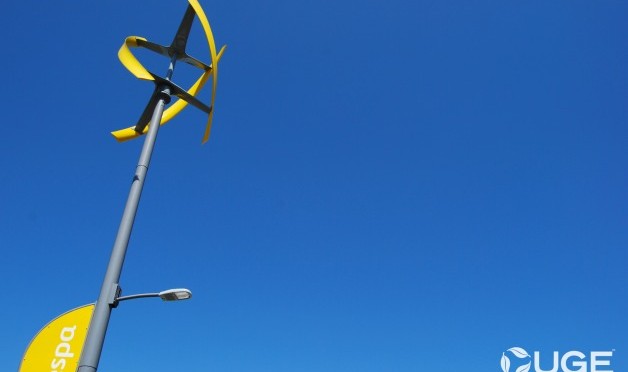 Located in Barcelona, Spain, the 4-kilowatt wind turbine looks like any other vertical axis wind turbine from a distance. Get closer however, and you notice an electric car charging station neatly enclosed in the base of its 42-foot tower.

Although the wind turbine itself will generate electricity at wind speeds greater than 7 mph, it does need wind speeds of around 24 mph before it is generating 3 kilowatts, the power generally needed for the slowest level 2, 240-volt charging station.

At lower wind speeds, or higher level 2 charging loads, the Sanya Skypump can be connected to the grid to pull additional energy as required.

This makes it possible for the wind-powered charging station to offer up to 40 amps — around 9 kilowatts — of level 2 charging capability, despite a rated maximum wind turbine power output of 4 kilowatts.

Although the first to be installed since its launch, the Spanish Sanya Skypump won’t be the last.

Because of its compact design, the $30,000 Sanya Skypump can be installed in locations where traditional wind turbines cannot, making it ideal for large corporate parking lots.

Urban Green Energy and GE say that more Skypumps will be installed this year at various locations — including Universities and shopping malls — in the U.S.