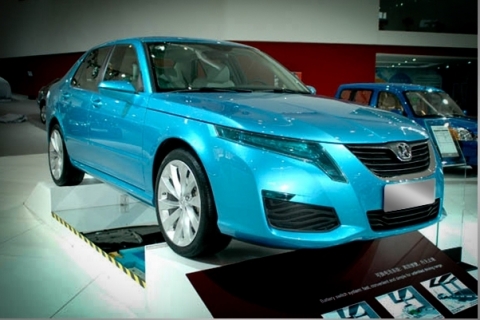 China has one of the world’s most aggressive plans to promote electric vehicles.

Boston-Power, Inc., the rapidly growing provider of next-generation lithium-ion battery cells, modules and systems, today announced a multi-year agreement to provide battery systems to Beijing Electric Vehicle Company (BJEV), the electric vehicle delivery arm of Beijing Automotive Industry Company (BAIC). Reflecting a long-standing working relationship between the two companies, it is projected that Boston-Power’s battery systems will be used in hundreds of electric vehicles (EVs) starting in 2012 and thousands of EVs by 2014.

Boston-Power’s lithium-ion batteries will fuel Beijing Automotive Industry Holding Company (BAIC)’s all-electric C70 model. Hundreds of the sedans will be available in China later this year, with thousands expected to be on the road by 2014. (Photo: Business Wire)

Under terms of the agreement, Boston-Power’s battery systems are expected to support multiple BJEV models and brands. Availability of pre-ordered vehicles begins in fourth calendar quarter 2012 with the C70 sedan, which is based on the 9-5 SAAB chassis BAIC acquired in 2009.

“China’s stated policy is to lead the world in the development of clean transportation and we intend to produce thousands of hybrid and electric vehicles,” said Fang Qing, general manager of Beijing Electric Vehicle Company. “We are impressed with Boston-Power’s green and high performing technology. We welcome the opportunity to work with the company and our other key suppliers to bring EVs to consumers in China and around the world.”

According to Pike Research, a part of Navigant’s Energy Practice, the market for Li-ion batteries for transportation will grow from $2 billion annually in 2011 to more than $14.6 billion by 2017. Gas prices, increased oil dependence, and a growing desire for zero-emission vehicles are driving consumer change and buying behaviors. The research firm points to China and the U.S. as the two markets currently best positioned to enjoy the strongest growth rates for EV adoption. Notably, China is recognized in the report for being a world leader in instituting government policies to incent consumer adoption of EVs.

In September 2011, Boston-Power announced $125 million in funding from a combination of private equity investment and support from China. The growth capital and Chinese government incentives are being used to scale manufacturing, research and development, and business development activities in China. The private equity round was led by GSR Ventures, a venture capital firm with over $1 billion under management that invests primarily in early stage and growth stage technology companies with substantial operations in China. Additionally, through its stimulus programs and local industrial policies, the Chinese government is providing a range of grants, low-interest loans and related financial and tax incentives.

As part of its plans, Boston-Power is establishing a world-class R&D and EV battery engineering facility in China. This organization is building upon the current generation of Boston-Power’s lithium-ion battery technology to develop new energy storage products and solutions. The company is also building a state-of-the-art manufacturing facility in China that will be capable of producing 400 megawatt hours (MWh) of lithium-ion battery cells annually by the end of 2012.

Founded in 2005 by International Chairman Dr. Christina Lampe-Önnerud, a globally recognized innovator, entrepreneur and technology advisor with regard to portable power, energy storage and climate change, Boston-Power has more than 150 patents filed on its breakthrough technology. With more than $330 million in growth equity funding from blue-chip international investors, complemented by support from China, the company has earned accolades for its executive leadership and technology from organizations that include The Wall Street Journal, the World Economic Forum, The Cleantech Group/Guardian Media and News, Grist, and the Royal Swedish Academy of Engineering Sciences (IVA).