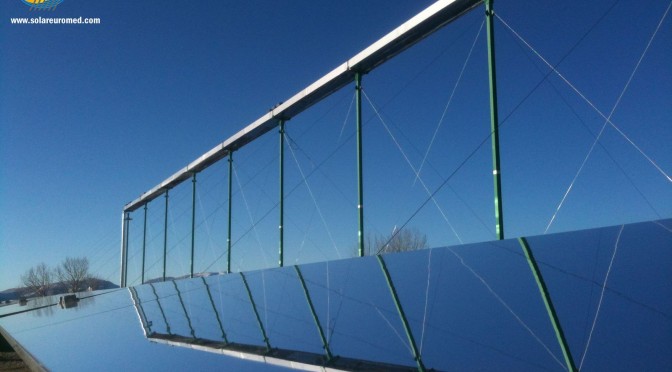 French Minister Delphine Batho for Ecology, Sustainable Development and Energy, announced on July 27th the outcome of the national solar tender launched by the French Regulatory Commission of Energy for the implementation of solar power plants above 250 kW.
ALBA NOVA 1 won the national solar tender launched by the French Government, and was awarded a guaranteed tariff for its solar energy production during 20 years. This project consists in the realization, on Corsica island, of a solar thermal power plant with an installed capacity of 12 Megawatts, representing the annual consumption of about 10,000 households. It relies on an innovative concentrated solar thermal power (or CSP) technology transforming solar energy into heat later converted into electricity through a steam turbine. This technology combining linear fresnel reflectors, direct steam generation, and thermal storage was developed by French private company SOLAR EUROMED, with financial support from French public innovation funds.
To ensure commercial success of the project, SOLAR EUROMED has partnered with leading renewable energy companies: AKUO ENERGY, an independent renewable energy developer and CAISSE DES DEPOTS ET CONSIGNATIONS, the French sovereign wealth fund.
After 5 years of commitment toward sustainable development, SOLAR EUROMED is confirmed as a leading player in the CSP sector for its leading expertise, its contribution for the development of a competitive CSP industry, and its strong regional and local presence.
Marc Benmarraze, Chief Executive Officer of SOLAR EUROMED, said: “We are extremely proud to announce the upcoming construction of the largest innovative solar power plant in France approved last week by the French Government. We are convinced that this project will produce significant economic impacts for the French CSP industry and enable SOLAR EUROMED and its partners to successfully enter the global CSP market with 400 MW already in our project pipeline. We are very excited to introduce our novel CSP technology to the market with this successful award granted by a national authority in a competitive environment.”

SOLAR EUROMED is a French private company providing innovative solutions in the field of Concentrated Solar Power (CSP). Its proprietary technology is based on the concept of direct steam generation and linear Fresnel reflectors, using simplified structures that collect and concentrate the Sun’s irradiation to produce energy. Solar Euromed’s CSP technology is implemented in a pilot plant in the south of France, and will be scaled up in the ALBA NOVA 1 plant in Corsica.