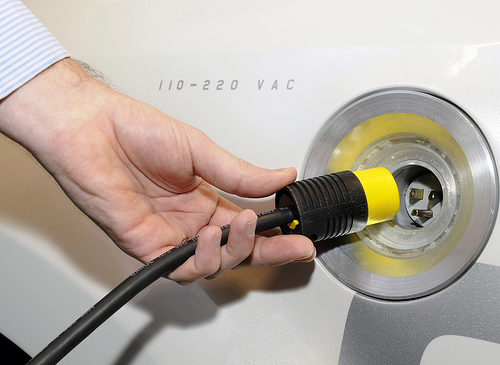 Ford is making sure its customers can take advantage of the rapidly growing infrastructure for the electric cars in the U.S.

Ford is making sure its customers can take advantage of the rapidly growing electric vehicle infrastructure in the U.S. – now with more than 9,400 public charging stations – by equipping cars like C-MAX Energi with batteries that can charge in as little as 2.5 hours and offering an app that is updated daily and helps find nearby charging stations.

MyFord Mobile is an app developed by Ford engineers that can only be used with Ford Focus Electric and the soon-to-be-available C-MAX Energi and Fusion Energi plug-in hybrids. In addition to locating charging stations, the app allows customers to manage remote charging, view current battery status and plan trips.

The charging station locator is powered by MapQuest and provides important details about charging stations in close proximity to the owner’s vehicle, such as street address and hours of operation.Stations are popping up all over, too – from local grocery stores in Pittsburgh, churches in Austin, Texas, and hospitals in Portland to places like McDonald’s, Starbucks , Whole Foods, Walgreens, Target, Cracker Barrel and Walmart.

“As more stations join the grid, MyFord Mobile users will be among the first to know because information about charger locations is constantly being culled from various sources to provide the most up-to-date data,” said Mike Tinskey, Ford’s manager of Vehicle Electrification and Infrastructure.

“In addition to having innovative features that allow customers to minimize their transportation costs and maximize their EV driving range, MyFord Mobile also is the only mobile app that integrates up-to-date charge station locations real-time within the application,” said Tinskey.

Ford is tripling its electrified vehicle production capacity by 2013 with cars equipped with batteries that allow for quick charging at public charging stations.

Focus Electric – America’s most fuel-efficient compact that offers the equivalent of up to 110 miles per gallon (MPGe) city – is equipped with an advanced lithium-ion battery pack that can be fully charged in four hours, or about half the time of the Nissan Leaf.

C-MAX Energi plug-in hybrid – available this fall – will be able to recharge fully in two-and-a-half hours. C-MAX Energi is Ford’s first production plug-in hybrid, part of the company’s first hybrid-only dedicated line of vehicles, and now it is America’s most affordable plug-in hybrid. The vehicle is expected to deliver 95 MPGe, along with 550 miles of total range; its electric-only range is more than three times that of Toyota Prius plug-in hybrid per EPA testing methods. The all-new Fusion Energi, also a plug-in hybrid, is in the pipeline as well.

With the new electrified offerings from Ford, the rapid development of the public infrastructure to support the new electric and plug-in hybrid vehicles couldn’t be timed any better, said Tinskey.

“I cannot recall another time in our history when there was so much momentum and resources around an energy shift for transportation,” he says. “Not only are these charge stations a boost for consumers thinking about a plug-in hybrid vehicle, but they also provide a glimpse of how things will likely take shape in the future.”

Public charging stations aren’t the only way electric and plug-in hybrids are charged.

J.R. DeShazo, director of UCLA’s Luskin Center for Innovation, says research shows charging a vehicle at home remains the most common method for charging. The center researches and reports on environmental and sustainability issues.

Ford has ensured customers who prefer to charge at home are able to do so by making available a 240-volt charger designed specifically for Ford vehicles and for use in a residential setting.

The availability of 240-volt chargers – public or private – is important because they allow for faster charging of the advanced lithium-ion batteries used in Ford’s newest electrified vehicles. Focus Electric, for example, is able to fully recharge in four hours – about half the time of the Nissan Leaf.

Ford’s battery cell reliability, in fact, has been tested around the clock in high-mileage, extreme-use hybrid taxis around the country – including more than 80 million miles of operation in California. As Ford reported, yet, among the nearly 43 million battery cells Ford has tested or seen put to work in customer vehicles, only five issues have been documented.