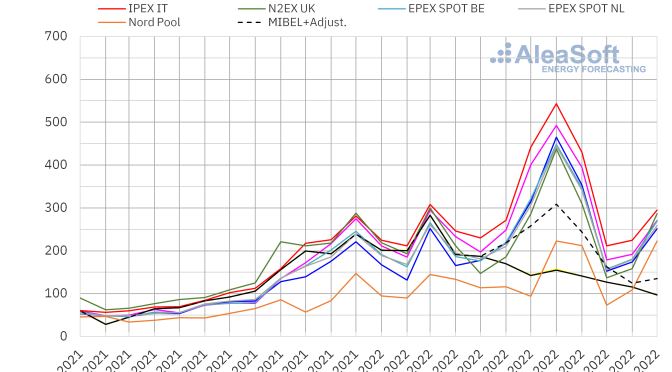 During 2022, the installed capacity of solar energy increased in most markets analysed at AleaSoft Energy Forecasting. The largest increase was registered in the Netherlands, more than doubling the capacity that was available in 2021, with 8174 MW, representing a 104% rise. The exception in the increases was Belgium, which during 2022 did not install new generation capacity with this technology and maintains the same as in 2021.

The increases in installed solar capacity favoured higher annual production. The market in which the solar energy production increased the most was Portugal, which in 2022 produced 45% more solar energy than in the previous year. In general terms, Germany was the market that generated the largest amount of solar energy during 2022, producing more than 55 TWh, a figure 18% higher than the 46.6 TWh produced in 2021.

As for the wind energy, during 2022 increases in installed capacity of this technology also predominated. The Netherlands also led the increases, in this case with an increase of 63%, surpassing the installed capacity of Italy. On the other hand, Portugal reported 2 MW less than in the previous year, which represents a barely perceptible decrease of 0.04%.

The electricity demand decreased during 2022 in most analysed European markets compared to 2021. The largest variation was registered in the market of the Netherlands, where there was a 7.9% drop, followed by the markets of Great Britain and France, with falls of 6.1% and 4.6% respectively. In the markets of Germany, Italy, Belgium, and Spain, the decreases were between 1.2% and 3.2%. The exception was the Portuguese market where the demand increased by 2.1%. Regarding the average temperatures of the 12 months of 2022, there were generalised increases compared to the same period of 2021 that were between 0.9 °C and 1.5 °C.

In 2022, the annual average price was above €200/MWh in almost all European electricity markets analysed at AleaSoft Energy Forecasting. The exceptions were the Nord Pool market of the Nordic countries, with an average of €136.00/MWh, and the MIBEL market of Spain and Portugal, with €167.52/MWh and €167.89/MWh respectively. However, when taking into account the price that some consumers had to pay due to the limitation of gas prices in the MIBEL market, they also exceeded €200/MWh, reaching an average of €209.92/MWh in the Spanish market. On the other hand, the highest annual average price, of €303.95/MWh, was that of the IPEX market of Italy, followed by that of the EPEX SPOT market of France, of €275.88/MWh. In the rest of the markets, the averages were between €236.29/MWh of the EPEX SPOT market of Germany and €244.53/MWh of the EPEX SPOT market of Belgium.

If average prices of 2022 are compared with those registered in 2021, prices rose in all markets. The largest rise in prices was that of the French market, of 153%, while the smallest increase was that of the Iberian market, of 50%. In the rest of the markets, the price increases were between 74% of the N2EX market of the United Kingdom and 144% of the German market.

On the other hand, in the case of the MIBEL market, if the price paid by some consumers to compensate for the limitation of gas prices, in force during part of 2022 in the Iberian market, is taken into account, the average price of 2022 in the Spanish market increased by 88% compared to 2021.

In the case of monthly prices, in general, the highest prices of 2022 were reached in the month of August, influenced by the rise in gas prices. In that month, record highs were registered in almost all markets. The highest average was that of the Italian market, of €543.15/MWh.

In 2022, the significant rise in gas prices compared to the previous year, influenced by the conflict between Russia and Ukraine, and the high CO2 emission rights prices led to the increase in European electricity markets prices. As a consequence, average prices for 2022 were historical maximums in all analysed electricity markets. The general increase in solar energy production, the decrease in demand in almost all markets and the increase in wind energy production in Germany, France or Spain were not enough to avoid the price rises compared to the previous year.

The start of the conflict between Russia and Ukraine favoured the increase in prices, which reached their maximum value, of $127.98/bbl, on March 8. This settlement price was the highest since July 2008. However, fears about the effects on demand of a possible global economic recession and the evolution of COVID?19 in China exerted their downward influence on prices in 2022.

As for TTF gas futures prices in the ICE market for the Front?Month, during the year 2022, they increased until reaching an average price of €133.19/MWh. This average was 174% higher than that of the Front?Month futures traded in 2021, of €48.54/MWh, and the highest in, at least, the last nine years.

In 2022, after the start of the war in Ukraine, TTF gas futures prices increased until reaching a record price of €227.20/MWh on March 7, influenced by fears of supply problems. But, the continuity in the supply of gas from Russia and the increase in the arrival of liquefied natural gas by sea allowed prices to fall again.

Subsequently, several European countries stopped receiving gas from Russia when they refused to pay for it in roubles, a requirement established by Russia in response to the imposed sanctions. In addition, in the second quarter of 2022, the gas flow through the Nord Stream 1 gas pipeline decreased due to technical reasons and in July it was completely interrupted to carry out annual maintenance work. When the gas flow through this pipeline resumed, it did so in smaller quantity. On the other hand, the supply of liquefied natural gas from the United States also decreased from the second week of June due to the temporary closure of an export plant. In July, the gas supply from Norway and Algeria also decreased, contributing to the upward behaviour of prices.

In August, the high demand to replenish gas reserves before winter, together with fears of further interruptions in Russian gas supply, led to rapid price rises. As a consequence, the record price for March was surpassed. On August 26, the annual maximum settlement price, of €339.20/MWh, was reached. This price was the highest since at least October 2013.

Afterwards, prices fell favoured by the high levels of European reserves and maintained their downward trend until the first half of November, to which temperatures above the usual ones for the season contributed.

From the second half of November, the decrease in the number of vessels waiting to unload at the regasification plants, the drop in temperatures and the increase in electricity production with gas led to a certain recovery in prices. But in the last weeks of 2022, prices fell again and, in the last sessions of the year, settlement prices remained below €85/MWh, influenced by forecasts of mild temperatures and high wind energy production for the start of January.

Regarding CO2 emission rights futures prices in the EEX market for the reference contract of December 2022, during the past year, they increased compared to the previous year, reaching an annual average price of €81.24/t. This average was 50% higher than the average registered for these futures in 2021, of €54.05/t.

In 2022, the maximum price, of €98.01/t, was reached on August 19 and it was the highest in history. In the month of August, the prospects of an increase in thermal production associated with the decrease in hydroelectric production due to the drought contributed to the increase in prices.

With the beginning of 2023, AleaSoft Energy Forecasting and AleaGreen are updating the long?term European electricity markets price curves, essential for the financing and valuation of renewable energy projects and for PPA. These price forecasts have a 30?year horizon and hourly granularity, include the annual confidence bands, prices captured by the solar photovoltaic and wind energy, in addition to AleaLow Solar PV and AleaLow Wind, which allow estimating the most bearish scenarios of the captured prices for a set of years of the forecast horizon, with the added value of having an associated probability value, necessary for financial models and risk management.