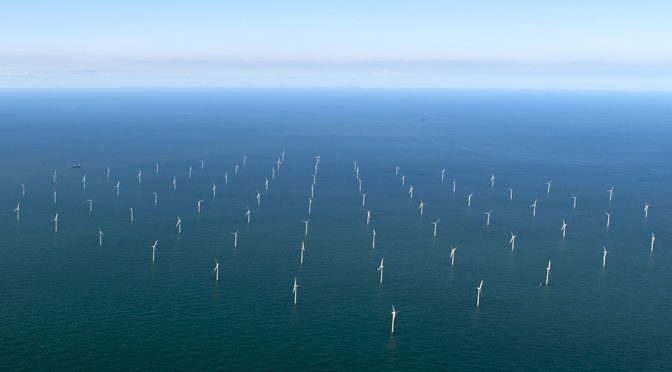 The Offshore Wind Congress, organized by the Wind Energy Business Association (AEE), celebrates its first edition in Bilbao from November 22 to 23. This event brings together more than 450 experts in offshore wind power to advance the fundamental milestones of its development in Spain. AEE has the support in this event of the Basque Energy Cluster as co-organizer, and the Basque Energy Entity (EVE) as an institutional partner.

“The significant number of offshore wind projects submitted for public consultation is yet another example of the interest of developers, the potential dimension of the market and the positioning of this sector as a motor for industrial development”, indicated Juan Virgilio Márquez, general director of AEE, at the press conference prior to the inauguration of the Offshore Wind Congress.

“We thought that we would arrive at this inauguration with the maritime spatial planning plans already approved and with the draft of the regulatory framework in the consultation phase. Our fear is that this delay could affect the schedule for holding the first offshore wind auction in our country”, highlighted the CEO of AEE. “If we join forces among all the players – public and private – 2023 will be the year of real take-off for the offshore market in Spain”, added Márquez.

The development of offshore wind power presents a high potential to contribute to industrial development and the Spanish economy
In Spain there is a strong industrial fabric focused on the development of this technology, with a marked export character, coming from the leadership and experience acquired during the more than 20 years of implementation of onshore wind power and synergies with other sectors, in addition to the experiences acquired. abroad in the marine field by Spanish companies. In fact, there are several national shipyards that have participated in the construction of floating structures for some of the most important floating offshore wind projects in the world.

The development of offshore wind represents a boost to the strategic sectors with which it presents synergies, such as shipbuilding and shipyards, the auxiliary maritime industry and port management, civil engineering and consulting, the construction industry, as well as the metal industry, etc. For these sectors, offshore wind has become a leading market in their business diversification strategies.

Spain is the second country in Europe and tenth in the world in activity in the shipbuilding sector. Likewise, it is positioned as the third country in the European Union in number of shipyards in operation, concentrating most of its activity in Galicia, the Canary Islands, Asturias and the Basque Country. With the expansion of offshore wind, the role of national ports and shipyards may evolve, becoming centers for the construction and operation of offshore wind power facilities.

“It is urgent to develop the Maritime Space Management Plans (POEM) and a specific regulatory framework for offshore wind energy with an industrial focus. In parallel, it is necessary to establish a calendar/objectives for offshore wind that facilitates investment and offers visibility for the development of this technology in the country. We cannot stop prioritizing the necessary social consensus and co-responsibility to make possible the coexistence of offshore wind power with other activities on our coast”, highlights the general director of AEE.

José Ignacio Hormaeche, general director of the Basque Country Energy Cluster, has pointed out that holding the Offshore Wind Congress in Bilbao is of special relevance for the Basque sector for two reasons. “This is recognition of the strength of the wind power industrial value chain present in the Basque Country, which has more than 150 companies and a unique presence of Basque entities working on the development of the floating alternative. And the Congress is the starting signal for the deployment of offshore wind power in Spain, a strategic opportunity for the future for our industry”.

For his part, Iñigo Ansola, general director of the Basque Energy Entity, declared that “the Basque Country has a lot to contribute to all this exciting development that marine renewable sources represent thanks to its industrial and R&D fabric. In addition, we have a support line of 2.5 million euros, destined to promote the installation and testing of floating foundation devices for wind turbines, and the validation of prototypes of offshore wind turbines”.

Successful call in the first edition of the Congress
Over two days at the Offshore Wind Congress, more than 450 attendees will participate who will analyze the potential of this technology to position the Spanish industry as an international benchmark. National and international experts from more than 10 countries.

The Secretary of State for Energy, Sara Aagesen, inaugurates the Offshore Wind Congress today, accompanied by the Deputy Minister for Industry of the Basque Government, Mikel Amundarain, and the president of the Basque Energy Cluster, Luis Rodríguez Llopis and Juan Diego Díaz, president of AEE .

During the Congress we will present the 1st Offshore Wind Award to highlight the activity, strategy or work whose objective is the promotion and development of offshore wind in Spain. The award has been for IH Cantabria, (Fundación Instituto de Hidráulica de Cantabria) which is a public sector research center, with more than 10 years and 40 experience projects in the field of marine energy.

The jury of this edition, made up of representatives of the main companies in the offshore wind sector, has valued the promotion of the development of offshore wind in Spain, being one of the pioneers in this field and world leaders, his experience and research work, always open to collaborate with both the public and private sectors in innovation projects, and its mission and vision, promoting scientific excellence and its transfer, providing innovative solutions that contribute to the achievement of a just, inclusive, responsible and resilient society.