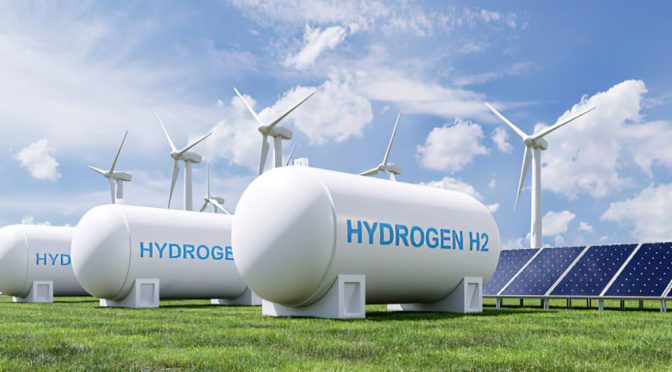 Hydrogen has been with us forever but with a much lower profile than oil and gas, coal, electricity and other energy sources. But that is changing.

Hydrogen, which powered the first internal combustion engine more than 200 years ago, has become an integral part of the modern refining industry: It’s light, storable, energy-dense, and produces no direct emissions of pollutants or greenhouse gases. But for it to make a significant contribution to clean energy transitions — today’s global goal — it needs to be adopted in sectors where it is almost completely absent, such as transport, buildings and power generation, says a report published by the International Energy Agency (IEA). Unfortunately, current ‘blue’ hydrogen production emits harmful greenhouse gases and so novel approaches are needed, thus the production of ‘green’ hydrogen.

Hydrogen use today is dominated by industry, such as oil refining, ammonia production, methanol production and steel production. Virtually all of this is supplied using fossil fuels so there is significant potential for emissions reduction from ‘clean hydrogen’. In transport, the competitiveness of hydrogen fuel cell cars depends on fuel cell costs and refueling stations while trucks need reduced delivery costs of hydrogen. Shipping and aviation have limited low-carbon fuel options and represent an opportunity for hydrogen-based fuels. In buildings, hydrogen could be blended into existing natural gas networks while longer-term prospects could include the direct use of hydrogen in hydrogen boilers or fuel cells. And in power generation, hydrogen is a leading option for storing renewable energy, and can be used with ammonia in gas turbines. Making green hydrogen is one of the top opportunities to integrate clean energy into our existing electricity and gas grid and help speed up the race to carbon neutrality.

“In the decades to come, all sources of energy will need to grow to meet rising global demand,” Jay Averill, spokesman for the Canadian Association of Petroleum Producers (CAPP), told Resource World Magazine. “A number of oil and gas companies have made investments in hydrogen and CAPP believes it is important for the industry to explore the opportunity hydrogen may offer to energy producers in Canada.

“The industry has the natural resources along with the talent, expertise and drive to deliver lower-emissions intensive energy to the world, whether that be natural gas and oil or hydrogen.”

Hydrogen can be extracted from fossil fuels and biomass, from water, or from a mix of both. Natural gas currently is the primary source of hydrogen production, accounting for about three-quarters of the annual global dedicated hydrogen production of about 70 million tonnes. Coal is also a significant hydrogen producer, due to its large role in China, while a small fraction is produced from the use of oil and electricity.

According to the IEA report, “clean hydrogen is currently enjoying unprecedented political and business momentum . . . now is the time to scale up technologies and bring down costs to allow hydrogen to be widely used.” The report says hydrogen can help decarbonize sectors including long-haul transport, chemicals, and iron and steel, where it is hard to meaningfully reduce emissions. It is versatile and can help produce, store, move and use energy in different ways, can be produced by a variety of fuels and can be transformed into electricity and methane to power homes and feed industry, and into fuels for cars, trucks, ships and planes. Also, it has the potential to help with variable output from renewables like solar and wind and for storing that energy. But it faces challenges: Its costly, infrastructure development is slow, it’s almost entirely supplied from high-emissions natural gas and coal today, and current regulations limit its development. The IEA has, however, identified four near-term opportunities: make industrial ports the nerve centres for scaling up the use of clean hydrogen; build on existing infrastructure such as millions of kilometres of natural gas pipelines; expand hydrogen in transport through fleets, freight and popular corridors; and launch the hydrogen trade’s first international shipping routes.

To scale up hydrogen, the agency recommends governments and companies establish a role for hydrogen in long-term energy strategies, stimulate commercial demand for clean hydrogen, address investment risks of first movers in the industry, support research and development which will lower costs, eliminate unnecessary regulatory barriers and harmonize standards, engage internationally and track progress. The IEA says momentum can be increased over the next decade by turning existing industrial ports into hubs for hydrogen, use existing gas infrastructures to spur new clean hydrogen supplies, support transport fleets, freight and corridors to make fuel-cell vehicles more competitive, and establish the first shipping routes to kick-start the international hydrogen trade.

It’s expected that Germany soon will sign a deal with Canada to establish hydrogen supply chains and liquefied natural gas exports as part of their green transition to reduce dependence on Russian gas supplies. A plant in Stephenville, Newfoundland will use wind energy to produce the fuel for export.

Also, Houston’s Vertex Energy Inc. (VTNR:NASDAQ) has secured a long-term supply of hydrogen from Taiyo Nippon Sanso Holdings Corporation (TYO:4091) subsidiary Matheson Tri-Gas Inc. for their recently acquired Saraland refining and petrochemical complex in Mobile, Alabama. Matheson will build an installation able to produce 30 million cubic feet per day of hydrogen, an acceleration of their corporate commitment to the energy transition and a carbon-neutral society. Vertex will spend up to $100 million to modify the refinery’s hydrocracking unit to produce renewable diesel fuel by the end of this year.

Fortis BC Energy Inc. (FTS:TSX) says it will partner with Suncor Energy Inc. (SU:NYSE) and Hazer Group Ltd. (HZR:AX) to build a hydrogen pilot project in Port Moody, British Columbia, an $11-million project producing hydrogen from natural gas. The product will be sold for manufacturing or industrial use. At full commercial stage it would produce up to 2,500 tonnes of hydrogen annually, enough to replace the annual natural gas usage of 3,300 households.

Then there’s Wintershall Dea, which has signed deals with Nord-West Oelleitung and an MOU with Egyptian Natural Gas Holding Company. The first involves production of low-carbon hydrogen using Norwegian natural gas at a hydrogen production plant to be built in Wilhelmshaven with the hydrogen produced being delivered by pipeline to industrial customers as a decarbonized energy source or as a raw material, reducing carbon dioxide emissions. The second involves an agreement to explore carbon capture and storage and hydrogen opportunities in the Nile Delta region.

EverWind Fuels LLC recently purchased the Point Tupper, Nova Scotia storage centre from NuStar Energy LP (NS:NYSE) for $76.9 million with plans to upgrade the facility to enable green hydrogen production there. Company president Trent Vichie said in a statement Phase 1 would see them spend $1 billion converting the terminal to, by 2025, turn wind energy purchased from Nova Scotia Power into hydrogen and then into 200,000 tonnes of ammonia for export by ship.

“We have the equity to go ahead and build that,” Vichie said, adding that Phase 2 would see over $7 billion spent to add onshore windfarms and expand production to a million tonnes annually by 2026.

With Canadian and German leaders expected to sign a green hydrogen agreement within days, Point Tupper is the closest Canadian project to actual production.

Canada is poised to become a leader in this field. In 2020 Natural Resources Canada released a national hydrogen strategy that would see much of this nation’s economy run on hydrogen while supporting the development of projects like Point Tupper and Stephenville to produce and export it.

“This strategy is a call to action. It will spur investments and strategic partnerships across the country and beyond our borders, said federal Natural Resources Minister Seamus O’Regan in a statement.