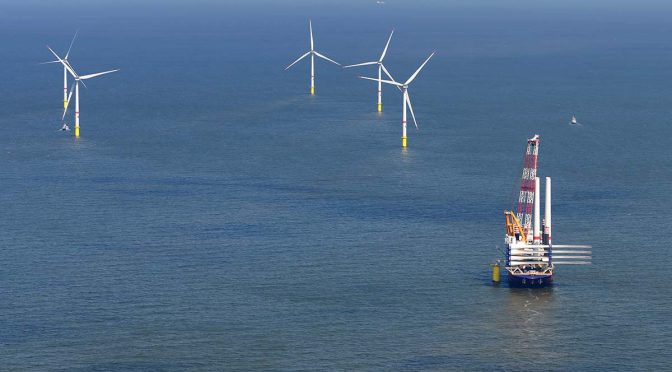 Three decades after the first offshore wind farm in the world was installed, Latin America, still inexperienced in the matter, is beginning to take an interest in this form of power generation.

Although these are projects that require a strong capital investment and involve major logistical challenges, offshore wind power offers more constant and larger-scale power generation than traditional wind power. Likewise, the offshore avoids the territorial conflicts that are often present with the fields of windmills.

In a scenario of hydrocarbon prices unleashed by the war in Ukraine and the sanctions against Russia, the search for energy alternatives becomes more attractive in terms of costs and sovereignty.

Brazil and Colombia took the first steps to advance in sectoral development. One of the keys for the installation of offshore wind projects to maximize the industrial and service impact on the rest of the production network is to take advantage of the experience of the offshore hydrocarbon sector.
offshore

Offshore wind energy is the source of clean and renewable energy that is obtained with the force of the wind that is produced on the high seas. Over the last decade, the sector has matured and grown rapidly, following slow progress since Denmark placed its first turbines in 1991. Since then, approximately 56 gigawatts (GW) of offshore wind capacity have been installed worldwide. , mainly in Europe and China.

Brazilian Ingrid Pacheco Silveira, an offshore wind expert, points out that offshore turbines take advantage of the lack of barriers present on earth to rotate faster and generate energy in a more constant and uniform way than onshore wind or solar photovoltaic. “Something that was demonstrated from the first projects is that larger turbines can be used in the marine environment than in onshore wind farms and with greater scalability,” she explains.

The Energy Sector Management Assistance Program notes that a quarter of the world’s offshore wind potential is in the waters of low- and middle-income countries, so accelerating its adoption in emerging markets has become essential to reduce dependence on fossil fuels.

In this last decade, the offshore wind industry has shown rapid growth, mainly in China and countries of the Organization for Economic Cooperation and Development (OECD). Last year, the wind industry posted a record for new installations for offshore wind power, with 21 GW of capacity added worldwide.

This relatively recent breakthrough is mainly due to a reduction in costs and a substantial increase in the size of the turbine and the scale of the project, explains Dr. Christian Appendini, an oceanographer at the Coastal Engineering and Processes Laboratory of the Engineering Institute of Mexico (UNAM). “Because it is now cost competitive, some governments plan to make it a key component of their decarbonized energy mix,” he says.
Potential

There is enormous untapped resource potential in Latin America and the Caribbean. The World Bank estimated a technical potential close to 8,000 GW in the region’s waters. Brazil and Colombia are the most advanced in their offshore wind legislation. For example, Brazilian industry developers have proposed more than 130 GW of offshore wind capacity in 55 projects.

Brazil is the largest onshore wind market in Latin America, followed by Mexico, Chile and Argentina. The Brazilian oil and gas industry is primarily offshore and has a very well-established supply chain that can be tailored to meet the specific needs of offshore wind.

“A first legislative project was issued in 2017 in the Chamber of Deputies, but 2020 was the game changer with the government launch of a roadmap to develop huge offshore wind farms with the involvement of the National Environment Agency. At the beginning of the previous year, a new legislative project was published and finally, in 2022, the Decree to regulate the market arrived, which generates great expectations for financing”, says Pacheco Silveira when identifying the regulatory advances in Brazil.

In Colombia, the agenda of energy projects is beginning to write a new chapter starring offshore or offshore wind power. “Progress will be made in the incorporation of projects that will make it possible to take advantage of the 50 GW potential that Colombia has with this generation source, which is almost three times the installed capacity (17.7 GW) that the entire country currently has,” said Diego Mesa. Puyo, outgoing Minister of Energy of Colombia, from the United States, after participating in the Summit of the Americas.

“This type of technology is much less invasive and does not generate greenhouse gases, a great advance from the point of view of carbon neutrality. In economic terms, these projects require very significant capital investments. For example, projects like the ones that are already being structured in Colombia for the next three or four years are going to require investments of close to 1,000 million dollars,” added Mesa Puyo.
complexities

Mesa Puyo warns that the great challenge lies in the logistics and port infrastructure, since the towers of the wind turbines that can be over 200 meters tall and require complex assembly.

At a regulatory level, the installation of an offshore wind farm needs to have exhaustive approvals after carrying out studies during the previous years, which include the compatibility of the structure with navigation, marine fauna, migration routes and transport dynamics, among others. other factors.

On the other hand, the great need for capital will require the participation of local and international financiers, which requires management of commercial risks to attract investment and minimize the cost of capital. The industry will prosper in Latin America if it goes hand in hand with the creation of an attractive environment for financing and the development of offshore wind policies.

“Many local jobs can be created, especially in the operations and maintenance phase, while the growth of a supply chain can help diversify existing industries, particularly those that already supply offshore oil and gas” adds Molina. Offshore wind energy is a growing industry worldwide and Latin America will not be the exception.