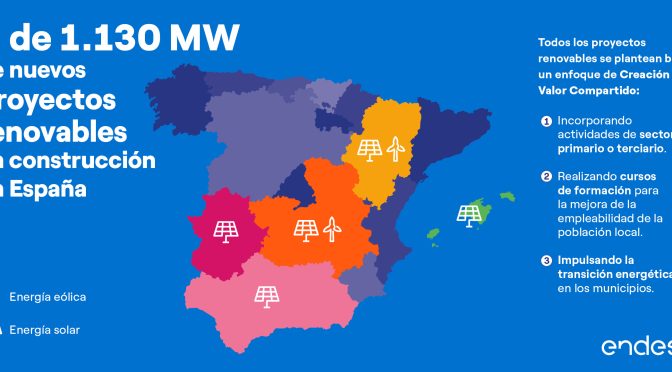 All renewable projects are proposed under a Shared Value Creation approach, incorporating primary or tertiary sector activities, conducting training courses to improve the employability of the local population, and promoting the energy transition in the municipalities.

Enel Green Power España (EGPE) is building 27 renewable projects in Spain that will have a capacity of more than 1,130 MW of new green energy in the country. In fact, so far this year, more than 4,200 professionals are working on the construction of the company’s renewable facilities in Spain.

“The solar and wind projects are mainly being built in the regions of Aragon, Castilla la Mancha, Extremadura and Andalusia, and aim to meet the goal we have set ourselves of achieving that all our production is 100% renewable by 2040,” said Luca Capuozzo, head of renewable construction at the company.

The Enel Group in Spain has reinforced its commitment to clean energy to promote decarbonisation and aims to reach 12,300 MW of solar, wind and hydro power by the end of 2024. The growth in renewable energies will allow 92% of energy production in the Iberian Peninsula to be free of CO2 emissions by the end of 2024, six percentage points more than at the end of 2021. This ambitious project to decarbonise electricity production will allow Enel to be a totally emission-free company by 2040 in Spain, with 100% of generation linked to renewable sources.

All these renewable projects are proposed under a Shared Value Creation approach, whose objective is to achieve the maximum integration and rooting of the project with the environment, maximising the value that they can leave in the local community through participatory initiatives in collaboration with the agents and entities of the area. Primary or tertiary sector activities are incorporated into the facilities, training courses are carried out to improve the employability of the local population, the contracting and consumption of goods and services in the area is encouraged, and these municipalities are supported on the road to energy transition, promoting self-consumption initiatives, energy efficiency and electric mobility among others, both in the public and private spheres.

To give some figures, in the last 3 years Enel will have trained more than 4,000 people in Spain in coordination with the municipalities of the localities where renewable projects have been developed. Courses in operation and maintenance of solar and wind plants and in panel assembly and construction of wind plants. In the future, courses related to primary sector activity will also be included as they become part of the activity of Enel Green Power España’s renewable facilities. Likewise, energy transition measures have been implemented in the municipalities where the renewable projects are located: with 31 LED lighting projects, 27 solar energy efficiency and self-consumption projects and 28 energy audits in public buildings, among other actions.

This is the case of Aragon, where EGPE has just commissioned its largest wind farm in Spain, TICO WIND, with a capacity of 180 MW. During the construction of this facility, 30% of the contracted workforce was local, making it possible to generate added value to the production of renewable energy. Enel Green Power España is also building two solar plants in the vicinity of this wind plant with a total of 77 MW, combining both technologies for the first time in the same area.

Similarly, as part of the ambitious energy transition project following the cessation of the activity of the Andorra Thermal Power Plant, EGPE has recently started the construction of the Sedeis V solar plantwithin the grounds of the old Valdeserrana ash and slag dump, restored and closed since 2012. With an installed capacity of 49.71 MW, more than 280 people will participate in its construction, of which at least 30% will be local labour. In this way, EGPE reinforces its firm commitment to economic and employment recovery. Once these facilities are put into service at the end of this year, this solar plant will generate more than 79.95 GWh/year, equivalent to the electricity consumption of 20,271 families. This will avoid emitting approximately 32,623 tons of CO2 into the atmosphere, equivalent to the circulation of 22,104 cars per year.

In Extremadura, where EGPE is developing new solar capacity, it is starting the construction of 5 renewable projects, being the Agripa, Alaudae, Gémina, Tierra de Badajoz and Torrecilla plants, of approximately 49.5 MW capacity each, and in whose construction more than 800 people will participate. This new capacity, which will come into operation before the end of the year, joins the nearly 700 MW already operational in the region, when EGPE launched 8 new solar installations last year that not only include the latest technology, but also innovation programs applied to make solar energy and the primary sector coexist.

This is the case of the solar plants located in Casas de Don Pedro, Talarrubias and Logrosán, where sheep graze between panels, contributing to the natural clearing of the land, and agrivoltaics with crops such as cauliflower and peppers. This synergy between panels and crops makes it possible to develop an exhaustive study of how the shadows of the photovoltaic panels benefit the crops, with the application of crops is studied individually depending on the location and orography of each renewable installation. These plants also implement pioneering environmental measures such as the installation of nests-ledges for raptors, passerines and chiroptera with the aim of carrying out biological pest control.

In addition to these projects under construction, EGPE is in the advanced process of another 40 photovoltaic projects in Seville, Cádiz, Córdoba, Huelva, Almería, Granada and Malaga, with an investment of 1.4 billion euros. All these projects are associated with the Creation of Shared Value (CSV) with local communities through training courses in renewable matters, since more and more specialised labour is needed, as well as collaboration with different social entities, environmental measures to protect local avifauna, and innovative projects such as the solar apiary that already exists in Carmona and that is being studied to implement in other locations.

Of note, EGPE’s solar apiary in Carmona, a pioneering project in Spain in the field of beekeeping and renewable energies, which constitutes the first commercial initiative for the production of solar honey inside a photovoltaic plant through local beekeepers. A local beekeeper was brought in to integrate the apiary with an aromatic agrovoltaic crop in order to share and not compete for land use. Beekeeping courses and apitourism activities are being developed in collaboration with the municipality of Carmona. It is also an open innovation space that has allowed two Spanish technological startups – Protofy and Smartbee – to implement a beehive sensorisation system to make their exploitation more efficient. El Alcázar, the association of people with disabilities and a reference in the area, participated in making the hardware for the installation of solar panels during construction, as well as participating in the design and labelling of honey containers.

Of the new renewable capacity planned for Castilla la Mancha, the works that are currently most advanced are the Campillo I, II and III wind farms whose construction began earlier this year. These renewable energy facilities located in the municipalities of Campillo de Altobuey, Enguídanos, Puebla del Salvador, Castillejo de Iniesta, Iniesta and Minglanilla, will become the company’s largest wind farm in Spain, with a production capacity of 259 MW.

On 2 March, EGPE also began the construction of the Minglanilla I and II solar plants, two 99.62 MW facilities located in the municipalities of Minglanilla and Graja de Iniesta (Cuenca). Once the facilities are put into service at the end of this year, this solar park will generate more than 172 GWh per year, which will avoid emitting approximately 114,000 tons of CO2 per year into the atmosphere.

These generation plants are joined by the construction work of EGPE’s first three solar plants in Ciudad Real. Calatrava, Ibereléctrica and Ninobe, which are located in Manzanares, at which more than 250 people will work during its construction to set up this new renewable plant that will have a new substation that will be built by 8 local developers, generating a new synergy with the local economy.

In this community, EGPE is processing 2 more projects in Puertollano (Ciudad Real), whose construction is imminent: Encina al Sol and Estrella Solar, which total 71.5 MW. A third solar project will be added in 2023, Rocinante of 117 MW, and the processing of a new solar plant in Manzanares of 120 MW.

Enel Green Power Spain is also and above all committed to renewable development on the islands. In the Balearic Islands, the company has just commissioned a new Son Reus solar plant in the municipality of Palma, with a capacity of 12.53 MW of installed capacity and a production of 20.17 GWh per year.

The Son Reus solar plant, EGPE’s third photovoltaic plant in Mallorca, is one of a series of renewable projects that EGPE is building in the islands together with Sa Caseta (21.83 MW), Biniatria (14.97 MW), Son Orlandis (under construction) and Ca na Lloreta (under construction), located in Mallorca with a total capacity of 56.6 MWp and co-financed with ERDF funds, representing a total investment of around €48 million.