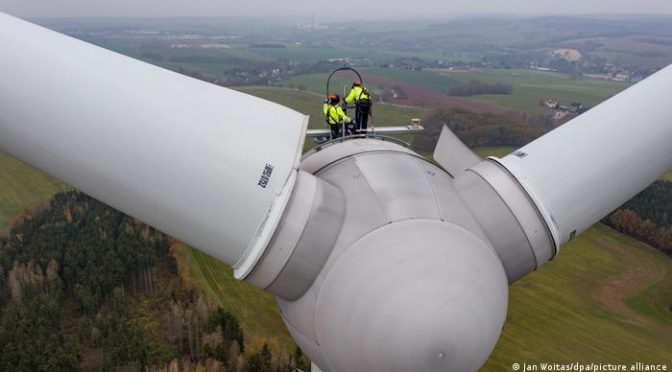 1.3 million people worldwide already work in the wind sector, but five times as many will be needed as the shift to renewable energy gathers pace. Newcomers are welcome.

“The view from the top is incredible,” says Tim Schmolowski, who is responsible for maintaining and mending wind turbines at heights of between 40 and 60 meters. “Especially on a cold, sunny winter’s day, when everything looks so clear.”

In 2015, the trained mechanic saw a job advertised by a wind turbine maintenance company in Erkelenz near the German city of Cologne. “I thought it sounded good and would probably be a job with a future, so I applied.”

Schmolowski got the job. Though he wasn’t afraid of heights, he had to do a two-week training course in safeguard techniques before his first mission. “You have to concentrate on the work you are doing.”

German Wind Technologies, the company he works for, employs more than 2,000 people. Worldwide, more than 1.3 million people work in the wind sector, including an increasing number of specialists. Most positions (600,000) in the industry are related to wind park planning, followed by turbine construction (444,000) and maintenance and operation (around 220,000).

An adventurous job: Tim Schmolowski is a maintenance engineer for wind turbines

Tim Schmolowski is among the maintenance workers whose task is to repair older turbines, and he still has to climb up a ladder within the 60-meter-high towers. By contrast, most newer models have elevators that rise to heights of more than 100 meters. But that’s not the only technological advance.

“In older turbines, there are a lot of mechanical components, while the newer ones have more electronics,” Schmolowski says, adding that he knew nothing about electrical engineering when he began. He has learned a lot in the past six years.

Service technicians always work in pairs, usually with a more experienced colleague training a newbie. Priority goes to faulty turbines, then come planned maintenance visits and the exchange of older parts — almost like dealing with a car, Schmolowski says.

Technicians check sensors, gearbox and the power generator at a height of 80 meters

Schmolowski and his colleagues are alerted to faulty turbines via a remote control room located in a small village called Ostenfeld on the border with Denmark, more than 400 kilometers north of Erkelenz. From there, several employees observe more than 6,000 wind turbines around the clock, both on land and offshore across Europe, as well as in the US and Taiwan.

Almost all larger wind turbines these days are connected to such control rooms via a fiber optic cable or a modem. They are maintained by turbine producers, large electricity providers, or wind power companies. When a fault occurs, an alarm shows up on a monitor in the control room.

“It details what kind of error has occurred in which wind park and on which wind turbine,” says André Klatt, team leader of the control room in Ostenfelder. “That’s how we know what kind of fault it is; we can sign in and intervene from here.”

He manages to solve 80% of defects by himself within just two hours by remotely rebooting the turbines so they can start producing electricity again. If that doesn’t work, service technicians like Schmolowski are sent to the affected turbine to solve the problem in person.

More than 6,000 wind turbines around the world are controlled remotely from a central office in northern Germany: André Klatt (front right) and his colleagues manage to solve most operational issues with a mouse click

Like many companies in the wind sector, German Wind Technologies has grown rapidly in the past years and the company is looking for more than 200 new employees in Germany and abroad.

CEO Matthias Brandt recruits applicants with experience of wind technology, but also mechanics and electricians — and even newcomers who have previously worked in places like auto repair shops.

“They should all join the wind sector,” Brandt says of young people, adding that the prospects are good. “It’s great technology and it’s super interesting. You have a bit of an adventure in the field and even more of an adventure when you have to go to offshore plants.”

According to the International Renewable Energy Agency (IRENA), most employees in the wind sector work in Asia, especially in China (550,000) and India (40,000). In Europe, there are roughly 340,000 people employed in the industry, most of them in Germany, the UK, Denmark and the Netherlands.

In North and South America, the number of wind jobs is also increasing, with some 120,000 jobs now registered in the US, 40,000 in Brazil and 20,000 in Mexico. In Africa, wind energy isn’t viable everywhere, but there too the industry employs some 40,000 people.

As wind power expands, there will be more jobs across the entire sector in the coming years. In 2020, wind turbines with a power of 743 GW were installed worldwide. In 2050, it could be as much as 8,000 GW.

That would equate to 6.5 million jobs, roughly two million of which would be needed for maintenance and repairs, according to a study by the LUT University in Finland.

Tim Schmolowski is happy about the growing number of new colleagues.

“The market is growing, the company is growing and we are always looking for new people,” he says.

His advice for anyone interested in the sector is to get online. “Just look up what kind of wind companies there are, where they are based, whether they are maybe also working internationally. And if there are no jobs advertised, then just send an unsolicited application or call up.”

What’s important is to show a lot of self-initiative, says Schmolowski. “You have to be excited about the job and about learning something new.”