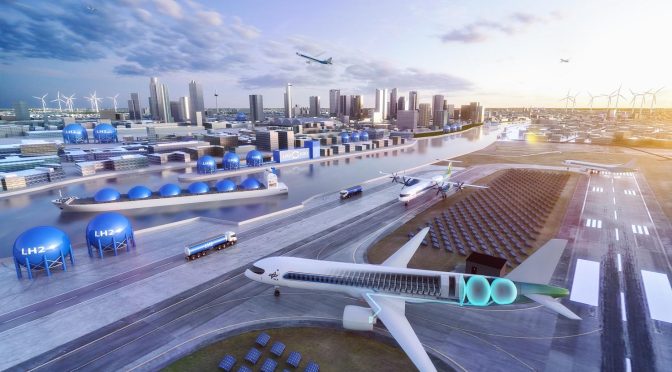 What would airborne mobility have to be like to radically reduce the emissions caused by air transport? The whole world is talking about hydrogen as a possible solution. However, flying with hydrogen not only requires completely new propulsion systems, but it will also have to be produced and transported to the airport. How can these changes be made while ensuring that air transport remains economically feasible? Climate researcher Katrin Dahlmann, aircraft propulsion engineer Jannik Häßy and renewable energy researcher Veatriki Papantoni gathered to discuss how low-emission air transport might be achieved.

With the Climate Protection Act, the German Federal Government is aiming for greenhouse gas neutrality by 2045. What role will air transport play in this?

Haessy: In 2019, before the pandemic, air traffic was responsible for approximately three percent of global carbon dioxide emissions. Business and leisure travel will likely rebound as vaccination rates increase. In addition, the global demand for air travel is expected to continue to grow in the coming decades.

Do you necessarily have to travel less if you want to protect the climate?

Haessy: In my opinion, the world is too diverse and beautiful to do without longdistance travel entirely. Intercultural exchange is important for world peace. That said, we need to ask ourselves whether every plane journey we make is necessary. Radically innovative aircraft concepts could achieve a significantly lower climate impact. The issue is that aircraft engines have long development times.

Dahlmann: In the shorter term, changes to flight patterns and route planning could reduce the climate impact. Flying in a lower atmospheric layer could reduce the climate-warming effect by up to 42 percent. One problem with this, however, is that the aircraft use more fuel and have to fly more slowly due to higher drag. Another possibility would be to fly around areas that are particularly prone to contrail formation. Flying long-haul in formation could also reduce greenhouse gas emissions and reduce the formation of contrails. This would require solutions in the areas of flight control and air traffic management.

Are there any technical innovations that could help to protect the climate?

Haessy: Today’s aircraft gas turbines can become more efficient and emit fewer greenhouse gases through larger fans, new materials such as ceramics, or more advanced cooling technologies. In addition, Sustainable Aviation Fuels (SAFs), can be used. They lead to a closed carbon cycle, because when they are burned, they only release the carbon dioxide that was captured during their production. The use of hydrogen as a fuel makes an aircraft engine carbon-free. Hydrogen is either burned in an aircraft gas turbine or converted electrochemically in a fuel cell. However, this requires many innovations. One example is different tanks, because liquid hydrogen has a higher volume compared to kerosene and must be stored at extremely low temperatures.

Dahlmann: New aircraft wing designs can also help to reduce fuel consumption. This would make flying at lower altitudes significantly more cost-effective, although it would still be somewhat more expensive. Policy changes such as emissions trading could make this easier to implement in practice and create incentives for airlines.

Has the COVID-19 pandemic been a good time for driving innovation?

Dahlmann: In April 2020 passenger air traffic dropped by 90 percent because of the pandemic, resulting in less carbon dioxide, ozone and contrails. This meant less impact on the climate in the short term. But we need long-term effects in order to protect the climate. I think the Fridays for Future campaign and the storms that occurred in Germany in summer 2021 have made the general public more aware of the problem. Even though the pandemic has had a severe impact on the entire aviation industry, now is an important time for change.

Ms Dahlmann, carbon dioxide is often cited as the culprit of climate change, but at the beginning you mentioned other factors. What effect do these have?

Dahlmann: In addition to carbon dioxide, nitrogen oxides (NOX) are also produced during the combustion of conventional fuels. These react with oxygen and generate ozone. The ozone layer in the stratosphere protects living things on Earth from excessive solar radiation. In the lower layers of the atmosphere, specifically the upper troposphere – where air transport takes place today – ozone has a global warming effect. In addition, we should not underestimate the effect of contrails. These are artificial clouds, which can retain heat within the atmosphere.

Mr Haessy, do you already have plans for propulsion systems that could also solve these problems?

Haessy: A gas turbine that is powered exclusively by hydrogen does not produce any carbon dioxide, just primarily water vapour. In addition, fewer nitrogen oxides could be produced than with the combustion of conventional or synthetic fuels. Also, no soot particles are formed, resulting in reduced contrail formation. If hydrogen is converted in fuel cells, nitrogen oxide emissions can be completely eliminated.

Is water vapour also not a powerful greenhouse gas?

Dahlmann: Yes, that is correct. However, water vapour in the upper troposphere only remains there for a very short time. At higher altitudes water vapour has a longer lifetime and thus a greater impact on the climate. Direct hydrogen combustion produces more water vapour, but studies show that this accounts for just 10 percent of the climate impact. We are currently investigating this impact with our AirClim climate model.

Today’s aircraft all operate in a similar way – with conventional gas turbines. How can new technologies be used while ensuring that airfares remain affordable?

Haessy: At the moment, it is not quite clear which technology will prove itself for which application. We currently believe that fuel cells are more suitable for powering small, short-haul aircraft. For medium- to long-haul flights, the combustion of hydrogen in gas turbines could become established. The short-term alternative would be SAFs. Fuel currently accounts for approximately 20 to 30 percent of the operating costs of a commercial aircraft. SAFs will initially increase these costs. However, DLR is working on ways to reduce them again. This could be achieved, for example, through a modified fleet deployment plan. Airlines could cover shorter distances with smaller, more efficient and fully utilised aircraft. However, ticket prices will certainly increase.

And does the carbon dioxide from the combustion of SAFs not have different effects in the atmosphere than on the ground, in the same way as ozone?

Dahlmann: No, carbon dioxide is evenly distributed throughout the atmosphere due to its very long lifetime.

If aircraft undergo these changes, then will the infrastructure, such as airports, also have to adapt?

Papantoni: The more aircraft are powered by hydrogen, the greater the amount required. Lorries can carry small quantities of hydrogen to the airports. As demand increases, the expansion of a corresponding supply network becomes necessary. In regions with a high potential for renewable energies, it would be cost effective to carry out electrolysis on site.

How much hydrogen is needed to fuel large fleets?

Haessy: The energy content of hydrogen per kilogram of fuel is about three times that of kerosene. Approximately 10 million tonnes of kerosene are consumed in Germany every year, so it would only need a third of that when using hydrogen. But supply in Germany alone is not enough; the destination airports would also need to have a hydrogen infrastructure.

How can sufficient hydrogen be produced sustainably and economically for global air transport?

Papantoni: Air transport is not the only sector requiring hydrogen; industries that would be difficult to decarbonise otherwise, such as the steel and chemical industries or shipping, also require hydrogen. Production of energy from renewable sources needs to be stepped up to meet that demand. The energy system needs to become more efficient. However, regions with little wind or sunlight will depend on imports. A higher price for carbon dioxide, for example through EU emissions trading, will make hydrogen more attractive as an alternative energy carrier.

What is the environmental impact of producing hydrogen by electrolysis? Is this not inefficient if SAFs and hydrogen have to be produced at great expense?

Papantoni: The climate impact is only one element of the overall environmental impact. Producing hydrogen requires electricity, water and the necessary plants. Up to 18 litres of very pure water are required to make one kilogram of hydrogen. So, when building a hydrogen economy, it has to be ensured that there is sufficient water available. We are also investigating the environmental impact of extracting the raw materials needed to construct the plants. SAFs and hydrogen are probably less relevant for applications that are easy to electrify, such as passenger cars. For long-haul flights or maritime applications, these energy sources provide an eco-efficient alternative. There are also synergetic effects in the production of SAFs and hydrogen. Seasonally, the amount of renewable energy that can be generated will fluctuate. It is possible to store surplus electricity in hydrogen and synthetic fuels.

As scientists, how do you manage to foresee all of this with such clarity?

Haessy: Aircraft are very complex systems. There are many interdependencies between the individual components. At DLR, there are specialists for the respective systems and disciplines. The difficulty lies in combining all of this expertise and making it usable as a whole. In the EXACT project, we are developing software that combines the capabilities of the various DLR institutes. This enables us to evaluate a whole range of scenarios involving different propulsion concepts and aircraft types, including their climate impact. Findings from the project could help industry to decide for or against a particular technology.

Dahlmann: Our AirClim model allows us to determine changes in global near-surface temperatures due to emissions and contrails. In combination with other DLR software tools, we are evaluating possible solutions for reducing the impact of future air transport on climate change, despite an increase in traffic.

Papantoni: In addition to the climate impact caused by emissions, as part of the EXACT project we are examining the environmental impact of operating and producing aircraft. To do this, we are carrying out a lifecycle assessment that analyses energy and material flows over the entire life cycle. This enables us to estimate the impact on the ecosystem and human health.