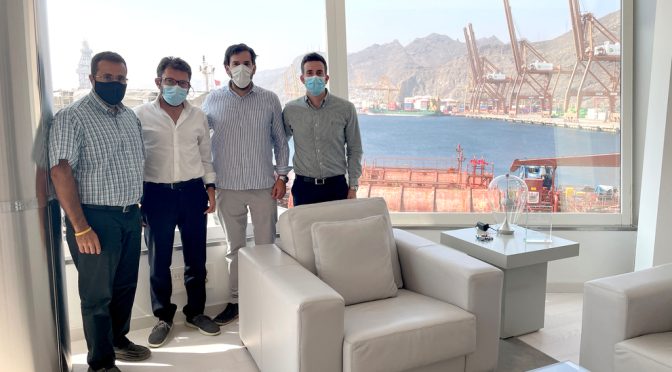 Capital Energy, a Spanish energy company born in 2002 and whose vocation is to become the first 100% vertically integrated renewable operator in the Iberian Peninsula, continues to consolidate its emergence in the incipient offshore wind energy sector in Spain and, specifically, in the Canary Islands.

The renewable energy company has just signed its third strategic collaboration agreement (MOU) with the Canarian shipyard group Hidramar Group, through which this company will make its port facilities available to Capital Energy, as well as the different services it provides, for meet the needs arising from the future construction of marine parks in the archipelago.

This five-year, renewable agreement includes, among other issues, the manufacturing, commissioning and launching of the floating foundations and mooring systems, the assembly of the turbines and the storage of all kinds of components necessary for the construction of a marine park: turbines, floating foundations, mooring systems, submarine electrical cables with their accessories, etc.

Likewise, Capital Energy has agreed with Hidramar Group that its shipyards, located in Tenerife and Las Palmas, can take care of the necessary offshore logistics during the construction phase, such as the transport of personnel / materials, surveillance boats, flotels, etc. . Finally, it may provide operation and maintenance services, including the construction and operation of the O&M base or technical inspections of the park.

The MOU now signed with Hidramar Group succeeds those sealed by the renewables company with two other Canarian shipyards a month ago. Through all these framework agreements, which respond to Capital Energy’s commitment to the industrial fabric of the regions in which it carries out its activity, the company’s commitment to this autonomous community is ratified, which it considers strategic for the development of energy offshore.

In this sense, Capital Energy will continue to maintain contacts and promote the signing of agreements with administrations, companies and local groups that can benefit from the driving effect that it plans to exert with its activity in the Canary Islands.

Juan José Sánchez, CEO of Capital Energy, has assured that “we try to reconcile our contribution to the progressive decarbonization of the economy, through the implementation of renewable energies, with the promotion of the economic and social development of all the territories in which that we operate, as evidenced by the signing of this agreement with a Canarian company so relevant that it will serve to promote our project in the offshore wind sector ”.

For his part, Jonathan Pérez, CEO of Hidramar Shipyards, has indicated that “the objective of Hidramar Group is to take advantage of our experience and sustained growth to address the European challenge of decarbonization of the economy. In our shipyards, Tenerife Shipyards and Hidramar Shipyards, we are not only committed to being part of the value chain for the decarbonization of the naval industry but, from now on, we are working on large-scale projects for the offshore energy industry with floating structures . Our experience, automated facilities and a strategic location in the Mid-Atlantic guarantee a promising future in the clean energy sector; promoting economic and social development in our community, in Tenerife and Gran Canaria ”.

Capital Energy, winner of the two renewable auctions organized by Miteco this year – in which it was awarded some 2,200 megawatts (MW) -, is now pursuing, in the heat of the government’s commitment to this clean energy technology, to develop a portfolio of several gigawatts with the aim of maintaining a quota of offshore wind similar to that already held in the onshore wind projects that are being processed in Spain.

According to forecasts, Spain could have an offshore wind operating capacity of up to 3 gigawatts (GW) by 2030. In this context, Capital Energy aspires to start up a minimum of 750 MW of power, whose development and construction would imply, at current prices, the investment of more than 3,500 million euros in the next decade.

It should be remembered that the origins of Capital Energy are closely linked to offshore wind and that, specifically, in 2005 it already presented an ambitious and pioneering development plan for this cutting-edge technology to the General Directorate of Energy Policy and Mines of the Ministry of Industry. , Tourism and Commerce, which contemplated the possibility of developing a portfolio of offshore projects of 1,800 MW. The company is currently analyzing the fit that this entire portfolio could have in the new regulatory framework, while moving, in parallel, in the search for new technically and economically viable locations.

Hidramar Group is a Spanish holding company that operates two shipyards in the Canary Islands, Tenerife Shipyards and Hidramar Shipyards, in Tenerife and Gran Canaria, respectively.

Both shipyards are located in the Free Trade Zone, with a strategic position in the middle of the Atlantic Ocean, where there are maritime routes from three continents (Europe, Africa and America). Hidramar Group actively supports all major oil and gas drilling contractors and their OEMs.

We have obtained powerful MODU upgrades and repair know-how, including SPS, projects through integrated planning with customers, OEM.

In line with its commitment to the ecological and fair energy transition, Capital Energy currently has a portfolio of wind and solar projects in the Iberian Peninsula that is around 35 gigawatts (GW) of power, of which more than 8.7 GW already has the network access permissions granted.

Thanks to the launch of its marketer, in the last quarter of 2020, Capital Energy has completed its strategic objective of being present throughout the entire renewable generation value chain: from promotion, where the company has a consolidated position thanks to to its trajectory of almost 20 years, until the construction, production, storage, operation and supply. The company has more than 390 employees distributed throughout 16 offices in Spain and Portugal.