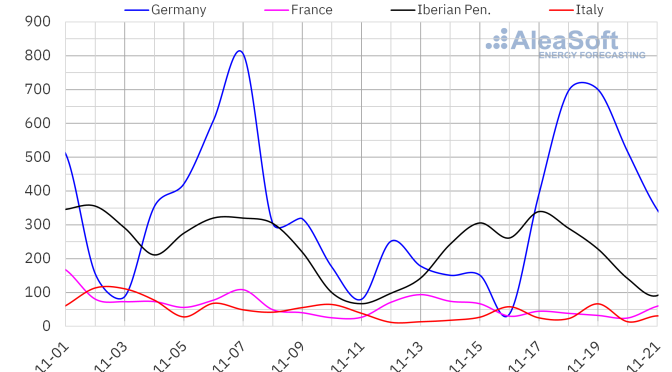 Prices of most European electricity markets rose in the third week of November and the weekly average was above €200/MWh in most cases. The increase in demand and prices of gas and CO2, the latter to record highs, overshadowed the wind energy production, which increased in several markets. These elements were joined by lower solar energy production in almost all markets. Electricity futures also registered increases in general.

During the week of November 15, the solar energy production increased by 12% in the Italian market compared to the production of the previous week. However, in the German market, the production with this technology fell by 62%. In the Iberian and French markets the decreases were 24% and 22%, respectively, for the same analysed period.

For the last week of November, the AleaSoft Energy Forecasting’s solar energy production forecasting indicates a recovery in the German market compared to the previous week. On the contrary, in the markets of Spain and Italy a lower production with this technology is expected.

In the week of November 15, the wind energy production increased in most of the analysed markets compared to the previous week. The German market was the one with the highest increase, of 94%, followed by the Iberian market with an increase of 41%, which was largely driven by the 153% rise registered in Portugal. In the Italian market, the generation with this technology was very similar to that of the previous week. The exception was the French market, where the wind energy production fell by 22% for the same period.

The electricity demand registered rises in most European markets during the week of November 15, compared to the previous one. The decrease in average temperatures in almost all markets favoured an increase in demand. The French market registered an increase in demand of 4.5% and maintained the upward trend for the fifth consecutive week. In the rest of the markets where the demand increased, the rises were mostly lower than 2.0%.

For the week of November 22, the demand is expected to register increases in most European electricity markets, according to the AleaSoft Energy Forecasting’s demand forecasts.

In the third week of November, the highest weekly average price was that of the IPEX market of Italy, of €236.50/MWh, while the lowest average was that of the Nord Pool market, of €60.97/MWh. In the rest of the markets, prices were between €167.52/MWh of the German market and €236.23/MWh of the British market.

The AleaSoft Energy Forecasting’s price forecasts indicate that in the week of November 22, prices might continue to increase in most European markets, influenced by the general increase in demand and the decrease in wind energy production in countries such as Germany, Spain and Portugal. In the case of the MIBEL market, price increases will also be favoured by the decrease in nuclear energy production in Spain due to the stoppage of Unit I of the Almaraz nuclear power plant for refuelling as of Monday, November 22. This shutdown will coincide with those of the Ascó I and Cofrentes nuclear power plants, although the production at the Ascó nuclear power plant is expected to resume by the end of the week.

Electricity futures prices for the first quarter of 2022 registered increases in all European electricity markets analysed at AleaSoft Energy Forecasting between the sessions of November 12 and 19. The EEX market of France was where the largest rises occurred, with an increase of 31%. On the other hand, in the ICE market of the Nordic countries there were the smallest increases, which in this case were 13%.

The settlement prices of Brent oil futures for the Front?Month in the ICE market during the third week of November remained below $82.50/bbl. On Friday, November 19, the weekly minimum settlement price, of $78.89/bbl, was registered. This price was 4.0% lower than that of the previous Friday and the lowest since the end of September.

The concern about the increase in COVID?19 infections in Europe and the effects on the demand of the confinement measures adopted in some countries had a downward influence on prices during the third week of November. The possibility of new confinement measures being adopted in more countries might continue to affect the evolution of demand and Brent oil futures prices in the coming days.

As for the TTF gas futures prices in the ICE market for the Front?Month, during the third week of November, they increased until reaching a settlement price of €95.17/MWh on Thursday, November 18. This price was 27% higher than that of the previous Thursday and the highest since October 14. However, on Friday, November 19, the price fell by 8.5% to €87.13/MWh. The negative news about the certification process of the Nord Stream 2 gas pipeline favoured the price increases of the third week of November.

Regarding CO2 emission rights futures in the EEX market for the reference contract of December 2021, in the third week of November they registered settlement prices above €65/t. As a result of the week’s price increases, a settlement price of €69.35/t was reached on Friday, November 19. This price, in addition to being 9.6% higher than that of the previous Friday, was the highest in history.

The next AleaSoft Energy Forecasting’s webinar will be held on January 13, 2022 and it will also include speakers from PwC Spain to continue analysing the topics of the webinar of January 14, 2021. In which will also be the first meeting of next year, prospects for European energy markets in 2022 will be analysed and how the regulatory and electricity market situation impacts the development of PPA will be discussed.

At AleaSoft Energy Forecasting, long?term price forecasts are made for most of the European electricity markets. One of the main characteristics of these forecasts is that they offer hourly values throughout the forecasting horizon of, at least 30 years, which allows estimating the revenues of renewable energy plants throughout their lifetime and, therefore, they become an essential input in the financing of renewable energy projects. Hourly forecasts are also necessary in the portfolio valuation and audits, processes in which this level of detail of the forecasts is essential.