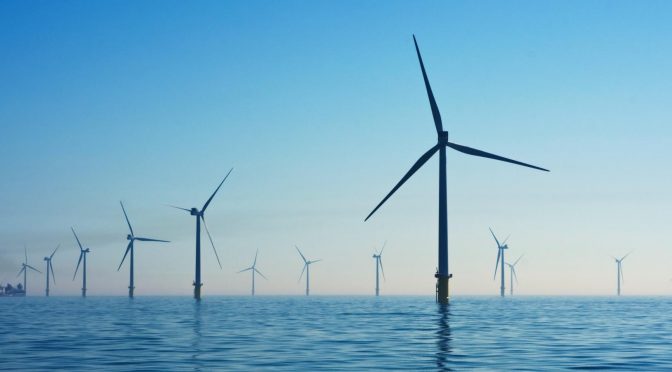 Wednesday 20 October, the SeaMade offshore wind farm at the Ostend Hippodrome was officially inaugurated. SeaMade is the second wind farm built by Otary, together with Eneco and Ocean Winds, joint venture created by EDP Renewables and ENGIE (50:50), specialized in offshore wind power generation.

The inauguration took place in the presence of the board of directors and its shareholders, investors, (sub)contractors and the SeaMade project team. Prime Minister Alexander De Croo, Deputy Prime Minister and Minister of the North Sea Vincent Van Quickenborne, Minister of Energy Tinne Van der Straeten, and Ostend Mayor Bart Tommelein were also present at the inauguration.

SeaMade has been operational since the end of 2020. The offshore wind farm was delivered on time and within budget. SeaMade consists of 58 wind turbines with a total installed capacity of 487MW that generate 1.8 TWh of renewable energy annually, able to supply energy to 500,000 Belgian households. SeaMade NV is responsible for the simultaneous development of both the Mermaid and Seastar offshore wind farms, resulting in the largest wind farm ever financed and built in Belgium. Mermaid is the furthest zone in the Belgian North Sea, about 50km from the Ostend coastline. Via export cables in the seabed, the electricity from the sea is linked to Elia’s offshore transmission grid and then brought ashore.

Since the end of 2020, after the commissioning of the last offshore wind farms in the North Sea, offshore wind energy has accounted for no less than 10% of total Belgian electricity consumption.

Offshore wind has become a crucial player in the energy landscape that needs to develop further with a capacity that can double to triple in the next 10 years. To ensure a successful energy transition, it is also essential to develop a long-term vision for the integration of sustainable energy sources.

Wouter Vandekerkhove Deputy CEO of SeaMade and Country Manager for Ocean Winds, a joint venture between ENGIE and EDPR: “SeaMade, the largest offshore wind farm in Belgium, has been created thanks to the collaboration and expertise of various partners and we are pleased that as part of the project team we have contributed to the development, realisation and now the operation of this important wind farm in our North Sea.” “Ocean Winds, together with ENGIE Electrabel, wants to play a pioneering role in the energy transition in Belgium, in which offshore wind energy plays a very important role. Our ambition is to have 1000 megawatts at sea by 2030, also in consortia such as this one.”

Offshore wind energy joint venture, owned 50:50 by EDP Renewables and ENGIE. Both companies believe that offshore wind is becoming an essential part of the global energy transition, which will lead to rapid growth in the sector and increased competitiveness. They have therefore included their entire portfolio of existing and ongoing offshore projects in the new company.

OW has a strategic advantage and a privileged position to play a leading role in the offshore market. EDPR and ENGIE have combined their offshore wind assets and project portfolio in OW, starting with a total of 1.5 GW under construction and 4 GW under development, with a target of 5-7 GW of projects in operation or under construction and 5-10 GW in advanced stages of development by 2025.

OW, headquartered in Madrid, currently has a presence in 8 countries and is mainly targeting markets in Europe, the United States and selected geographies in Asia, where most of the growth is expected to come from.

EDP Renewables (Euronext: EDPR) is a world leader in renewable energies and the world’s fourth largest producer of renewable energy. With a strong portfolio of projects under development, high quality assets and a leading operational capacity in the market, EDPR has undergone outstanding development in recent years and is already present in 17 international markets (Belgium, Brazil, Canada, Colombia, France, Greece, Italy, Mexico, Poland, Portugal, Romania, Spain, Hungary, Chile, Vietnam, the UK and the US). EDPR is firmly committed to social advancement in terms of sustainability and integration. It is, after all, part of the Bloomberg Gender Equality index and holds the Top Employer 2020 certificate in Europe (Spain, Italy, France, Romania, Portugal and the UK) and Top Workplace 2020 certificate in the US, both awarded in recognition of its employee policies.

Energías de Portugal, S.A. («EDP»), the main shareholder of EDPR, is an international electricity company that is a leader in value creation, innovation and sustainability. EDP has been included in the Dow Jones Sustainability index for 13 consecutive years.

Our group is a global reference in low-carbon energy and services. Our purpose (“raison d’être”) is to act to accelerate the transition towards a carbon-neutral world, through reduced energy consumption and more environmentally-friendly solutions, reconciling economic performance with a positive impact on people and the planet. We rely on our key businesses (gas, renewable energy, services) to offer competitive solutions to our customers. With our 170,000 employees, our customers, partners and stakeholders, we are a community of Imaginative Builders, committed every day to more harmonious progress.

ENGIE offers a range of capabilities worldwide. These include comprehensive services to help customers run their facilities more efficiently and optimize energy and other resource use and expense; a renewables business that includes, grid scale wind and solar as well as distributed resources and energy storage; and retail energy supply.

The project is part of the Otary partnership, which brings together on an equal basis many Belgian renewable energy specialists, from the private and public sectors and from the two largest regions. These include investment and development companies Green Offshore (Ackermans van Haaren) and Power @ Sea, specialist in dredging and complex hydraulic engineering works DEME and the green players Aspiravi and Elicio. Furthermore, the Walloon environmental holding company SRIW Environnement, and the Flemish and Walloon energy and utility companies Z-Kracht/Nuhma and Socofe are also shareholders of the company.

In addition to the SeaMade concessions, in which it has a 70% stake, Otary also fully owns the concession for the Rentel offshore wind farm, together they account for 100 offshore wind turbines or a total capacity of almost 800 MW. The Otary partners have helped shape the development of offshore wind in the Belgian North Sea. In addition to SeaMade, they are also involved in C-Power, Northwind, Rentel and Norther, accounting for a total capacity of 1,707 MW at sea, but Otary partners also participate in other renewable energy sources at home and abroad.

Eneco Group is a leading player in the supply and production of renewable energy and one of the largest players in the wind sector with more than 1,000 MW of renewable production capacity in the Benelux and the United Kingdom. Eneco Wind Belgium is the company responsible for the development of Belgian wind farms on land and at sea. For example, Eneco Wind Belgium has 96 onshore wind turbines (a total of more than 200 MW) and has a 25% share in the Belgian wind farm Norther. Eneco is committed to a New – fully sustainable – World and goes further than generating and distributing sustainable electricity. Eneco has more than 300 employees and is located in Mechelen, Ghent and Wavre. Eneco in Belgium has the ambition to supply its 1 million customers with 100% sustainable and 100% locally produced energy by 2025.