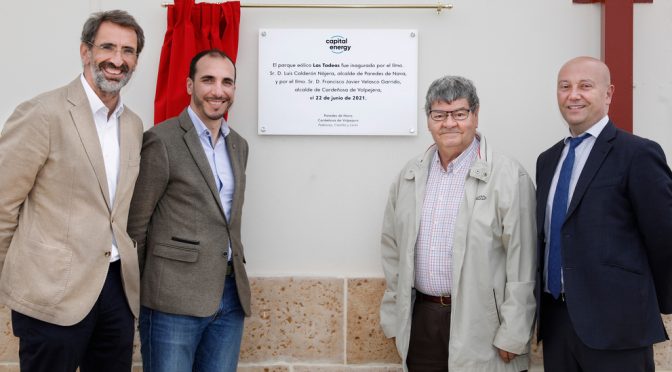 The event, held at the site, was attended by, on the one hand, the president of the company, Juan Lasala, the director in Castilla y León, Víctor Fernández, and the ‘site manager’ of Las Tadeas, Sergio Villarán; on the other, the mayors of the municipalities where this renewable energy facility is located, Luis Antonio Calderón (Paredes de Nava) and Francisco Javier Velasco (Cardeñosa de Volpejera)
The 11 wind turbines in this first Capital Energy operating wind farm will be capable of supplying clean energy to around 52,000 Castilian and Leonese households and will avoid the emission of almost 55,000 tons of CO2 per year. In addition, Las Tadeas will have an economic impact on regional and local coffers, as well as through leasing contracts, of more than 330,000 euros per year.
Capital Energy considers the community of Castilla y León to be key for its renewable energy project, where it develops more than 3,350 megawatts (MW), both wind -36 parks totaling more than 2,760 MW- and solar-nine photovoltaic plants whose combined power amounts to 590 MW-

Palencia, June 23, 2021.- Capital Energy, a Spanish energy company born in 2002 and whose vocation is to become the first 100% vertically integrated renewable operator on the Iberian Peninsula, continues to take steps to strengthen the development of its clean energy project with the inauguration of its first wind farm in Castilla y León: Las Tadeas.

This renewable energy facility, located in the province of Palencia, has an installed power of 39 megawatts (MW) and its development has involved an investment of around 40 million euros.

The park’s inauguration event, held this morning at the site, was attended by, on the one hand, the president of the company, Juan Lasala, the director in Castilla y León, Víctor Fernández, and the Las Tadeas site manager, Sergio Villarán ; on the other, the mayors of the municipalities where this renewable energy facility is located, Luis Antonio Calderón (Paredes de Nava) and Francisco Javier Velasco (Cardeñosa de Volpejera).

The 11 wind turbines of this first Capital Energy wind farm, the SG 132 model from Siemens Gamesa, will be capable of supplying about 138,000 megawatt hours (MWh) of clean energy per year, equivalent to the consumption of almost 52,000 Castilian and Leonese households, and to avoid, likewise, the annual emission into the atmosphere of around 55,000 tons of CO2.

The construction of the Las Tadeas park has generated around 220 jobs. In the operation and maintenance phase, which began in the last quarter of last year, it has led to the creation of 10 permanent jobs for professionals in the area.

It should also be noted that the plant will have an annual economic impact on regional (environmental compensatory measures) and local (IBI and IAE) coffers, as well as through leasing contracts, of more than 330,000 euros. To this recurring amount has been added the timely payment of the ICIO, which has amounted to 850,000 euros.

Castilla y León, a key region for the company

Castilla y León is a key region for the development of Capital Energy’s clean energy project. Not surprisingly, the company develops more than 3,350 megawatts (MW), both wind (more than 2,760 MW) and solar (590 MW), in this autonomous community, one of whose main strengths is the quality of its renewable resource. The start-up of all this capacity would mean a global investment of about 3,300 million euros.

Apart from Las Tadeas, Capital Energy currently has 45 renewable energy projects in Castilla y León, 36 wind and nine photovoltaic, distributed in seven of the nine provinces: Ávila, Valladolid, Zamora, León, Palencia, Burgos and Soria. It should also be noted that more than half of the company’s renewable initiatives will have a positive impact on the so-called just transition areas of influence.

Capital Energy has an office in Valladolid, where a dozen professionals carry out their work, and another in Ponferrada. It is currently in the phase of opening additional offices in several cities of Castilla y León, where residents of the municipalities where the company is promoting its wind farms and solar plants will work.

Around 38 GW of project portfolio in the Iberian Peninsula

In line with its commitment to the ecological and fair energy transition, Capital Energy currently has a portfolio of wind and solar projects in the Iberian Peninsula that is around 38 gigawatts (GW) of power, of which more than 8.5 GW already have the network access permissions granted.