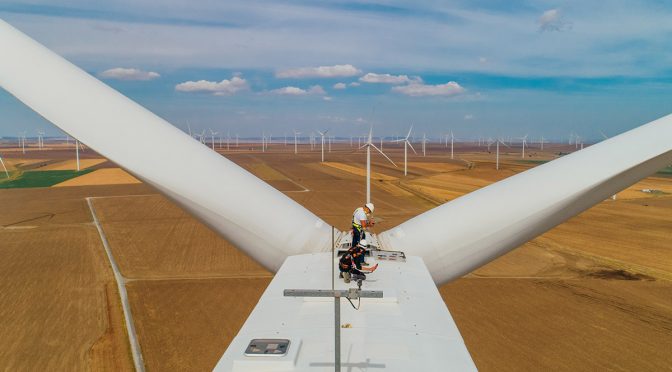 On 26 May the Romanian Wind Energy Association launched a Code of Good Practice for Renewable Energy in Romania. WindEurope CEO Giles Dickson spoke at the launch event alongside Romania’s Energy State Secretary, George Niculescu, the Energy and Competition Regulators, the TSO and the Chair of the Energy Committee of the Romanian Parliament.

The EU want wind to be 50% of Europe’s electricity by 2050. This entail a huge expansion of wind energy across Europe, and Romania can and needs play a significant role in this. They have 3 GW of wind capacity today, and the Government aims to have 5.3 GW by 2030. The new Code of Good Conduct sets outs how Romania can most effectively deliver this and what lessons Romania can learn from elsewhere in Europe as it embarks on its second wave of wind energy expansion.

The Code of Good Practice also gives guidance to wind farm developers on how to choose the right location for their wind farms and the engage local communities to ensure they see the benefits of wind. Romania’s first wave of wind energy build-out generated €8bn worth of economic activity, and wind can generate significantly more in the future. Each new wind turbine generates €10m of economic activity, supporting jobs and growth including in rural communities.

There have been questions on whether the Romanian electricity grid can accommodate more wind energy. This can only be answered with a clear yes.  Other European countries have managed it. Romania’s electricity grid has significant capacity, even if it would benefit still from further investment. And it is not just possible but also affordable to integrate much higher shares wind energy into the system.

Wind energy has become less variable because of development in technologies and higher capacity factors. And there is more demand response helping to balance the variable supply from renewables. And with more and more industrial corporate energy consumers demanding more renewables, wind can play a huge role in decarbonising the economy.

Romania used to award green certificates to new wind farms. It should now consider introducing a Contracts for Difference (CfD) model for future wind farms. It would be the cheapest model for the Romanian Government and it would minimise financing costs so reduce the total societal costs of wind. And it’s the model that many other countries in Europe are now applying to support the further build-out of wind energy.

WindEurope CEO Giles Dickson said: ‘We strongly believe Romania can benefit from a further expansion of wind energy. The new Code of Good Conduct will really help move this forward. The Romanian grid can handle increased volumes of wind energy. And If Romania introduces CfDs, then they’ll become an attractive market and they’ll find the further build-out of wind is more than affordable – it’ll bring them jobs, growth and investment.”