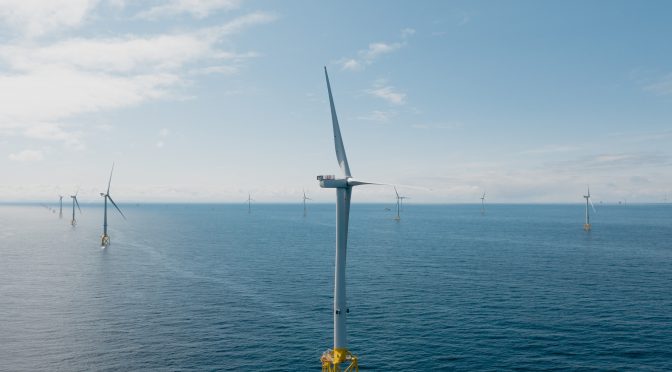 Moray East – Scotland’s biggest wind farm has exported first power to Scotland’s national grid via its new substation south of New Deer in Aberdeenshire on June 4 2021. Future development of offshore wind energy in Scottish waters, will be enabled by Moray West, under development, and the upcoming ScotWind leasing process.
Ocean Winds (OW), the result of 50-50 joint venture by EDP Renewables (EDPR) and ENGIE for offshore wind energy has celebrated commencing generation at Moray East (Scotland’s largest windfarm) and successful exporting of power to the grid by announcing its further intentions in the Moray Firth.
Ocean Winds (OW) has been developing offshore wind in the Moray Firth since EDPR won the rights to develop offshore wind in the Moray Firth in the UK’s 3rd round of offshore wind leasing in 2009. The sea-bed made available by the Crown Estate at the time was divided in two – Moray East and Moray West – to allow development of Moray East which had fewer constraints to take place first.
Ocean Winds is continuing its investment in Scotland through development activities in the Moray Firth.
Moray East is currently under construction in the Moray Firth. On completion later this year it will have a generation capacity of 950 MW. Project planning enabled generation to commence on June 4 – before all turbines have been installed.
Moray West has also been developed by Ocean Winds, having secured planning consent in 2019, and awaits award of a ‘Contract for Difference’, the Government contract which will enable construction of Moray West to commence.
Future development of offshore wind in Scottish waters, including the Moray Firth will be enabled by the ScotWind leasing process which closes on 16 July 2021, and will make new areas of Scottish seabed available for offshore wind development for the first time in a decade.
Spyros Martinis, CEO of OW, said that “After a decade of work and co-operation with communities and businesses across the North East of Scotland, First Generation is a proud and welcome achievement for all involved and represent one more step of Scotland’s energy transition path. But its just the start from the first few turbines from our first project, there is much more to come.
Grzegorz Gorski, COO of OW, comment: “Our mission is to lead the offshore wind into one of the main energy sources by delivering more efficient and sustainable wind energy solutions around the world and Morey East is a clear example of the success and innovation in this arena.”
Dan Finch, Managing Director of Ocean Winds UK Ltd said:
“Ocean Winds has a long term commitment to the Moray Firth. We have knowledge and expertise not just of our industry, but of the Moray Firth, and the diverse communities, industries and enterprises who are our neighbours. We have always regarded Moray East as our first project; Moray West is ‘shovel ready’. Beyond that, we are delighted that the Scotwind process, which is making new areas of seabed available, will enable us to go on working with enterprises across north-east Scotland to continue the development of offshore wind in the Moray Firth. Our commitment to the Moray Firth is long term and we look forward to Moray West and ScotWind which will create opportunities through the next decade”.

Ocean Winds, OW is a 50:50 offshore wind joint venture, owned and created by EDP Renewables and ENGIE. Both companies believe that offshore wind energy is becoming an essential part of the global energy transition, leading to the sector’s rapid growth and increased competitiveness. That is why they have included all their existing and pipeline offshore portfolio in the new company.
OW has a strategic advantage and is well-positioned to play a leading role in the offshore market. EDPR and ENGIE are combining their offshore wind assets and project pipeline in OW, starting with a total of 1.5 GW under construction and 4 GW under development, with the target of reaching 5 to 7 GW of projects in operation or under construction and 5 to 10 GW in the advanced development stages by 2025. OW primarily targets markets in Europe, the United States and selected geographies in Asia, from where most of the growth is expected to come.

EDPR is committed to furthering social advances in terms of sustainability and integration. This is reflected by the inclusion of the company in the Bloomberg Gender Equality index and the fact that it has been certified as a Top Employer 2020 in Europe (Spain, Italy, France, Romania, Portugal and the United Kingdom), both of which recognise its employee-driven policies.

Energias de Portugal, S.A. (“EDP”), the principal shareholder of EDPR, is a global energy company and a leader in value creation, innovation and sustainability. EDP has been included in the Dow Jones Sustainability Index for 13 consecutive years.

ENGIE is a global reference in low-carbon energy and services. Our purpose (“raison d’être”) is to act to accelerate the transition towards a carbon-neutral world, through reduced energy consumption and more environmentally-friendly solutions, reconciling economic performance with a positive impact on people and the planet. We rely on our key businesses (gas, renewable energy, services) to offer competitive solutions to our customers. With our 170,000 employees, our customers, partners and stakeholders, we are a community of Imaginative Builders, committed every day to more harmonious progress.
ENGIE offers a range of capabilities worldwide. These include comprehensive services to help customers run their facilities more efficiently and optimize energy and other resource use and expense; a renewables business that includes, grid scale wind and solar as well as distributed resources and energy storage; and retail energy supply.
Turnover in 2019: 60.1 billion Euros. The Group is listed on the Paris and Brussels stock exchanges (ENGI) and is represented in the main financial indices (CAC 40, DJ Euro Stoxx 50, Euronext 100, FTSE Eurotop 100, MSCI Europe) and non-financial indices (DJSI World, DJSI Europe and Euronext Vigeo Eiris – World 120, Eurozone 120, Europe 120, France 20, CAC 40 Governance).

ScotWind Leasing is the process currently being undertaken by Crown Estate Scotland, at the direction of the Scottish Government, to grant property rights for the seabed in Scottish waters for new commercial scale offshore wind projects. It is the first round of seabed leasing for offshore windfarms in Scotland for a decade.
The application process opens on 10 June and seeks a broad range of information about the proposals and the developer and includes a supply chain development statement document. The process intended to allow the Government to determine which application should be given preferred status and offered an option agreement in the event of there being competing interest for a site.