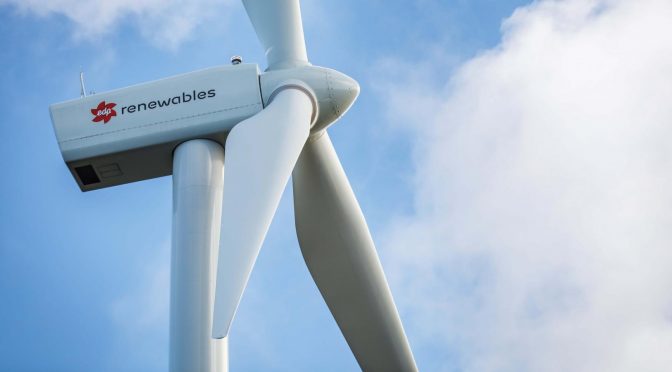 Financial results have been affected by the impact of weather events in Texas and lower US wind resources in the period, a situation that has been normalised since March.

EDP Renewables (Euronext: EDPR), a global leader in the renewable energy sector and the world’s fourth largest renewable energy producer, has increased its operating portfolio in the first quarter of the year to 12.5 GW, 1.9 GW more than in the same period of the previous year. Of this total, 11.7 GW are fully consolidated and 711 MW are equity consolidated (stakes in projects in Spain, Portugal, USA, as well as offshore projects).

In particular, EDPR has added 1,870 MW of wind and solar capacity in the first quarter, of which 1,782 MW have been fully consolidated. By geographies, 652 MW correspond to Europe (including the incorporation of Viesgo’s renewables business), 1,025 MW to North America and 105 MW to Brazil. On the other hand, the company has rotated 639 net MW in the period.

In addition, as of 31 March, EDPR had 2.9 GW of new capacity under construction: 2,226 MW of onshore wind, 404 MW of solar and 269 MW corresponding to participations in offshore wind projects.

Although EDPR recorded a first quarter load factor of 34% (+0.4 pp), with a significant recovery in Europe and Brazil, the company’s financial results have been particularly affected by the impact of the adverse weather events that occurred in the state of Texas in February and whose effects on the electricity system were notified by ERCOT (Electric Reliability Council of Texas).

In addition to this exceptional situation, which meant that millions of users were disconnected from the electricity supply, there were also lower wind resources in the United States during the period, a situation which, however, has been normalised since March.

However, it is worth noting that the business in Europe and Brazil recorded a solid performance, as evidenced by the 22 million euros increase in EBITDA in this regions compared to the same period of 2020.

Net debt amounted to 4,648 million euros (1,205 million euros more than at the end of the year), reflecting the optimization of cash flow during the first quarter, given the capital increase carried out in April.

This capital increase, amounting to €1.5 billion, will allow the company to finance the capex plan of around €19 billion that is part of its strategic plan, with the objective of deploying around 20 GW of renewable energy by 2025. In addition, the increase has improved EDPR’s position in the capital markets and strengthens the company’s leadership position on the path towards decarburization of the economy.

Progress in the Business Plan

EDPR has 6.4 GW guaranteed and a high visibility on the additional capacity that can be secured in the short term. At the end of the first quarter, the company had 2.5 GW of PPAs under negotiation or in very advanced processes and expects auctions for 30 GW to  be held in the markets where EDPR operates throughout 2021.

In addition, EDPR continues to make progress on its asset rotation plans, in line with the targets set out in its strategic plan to rotate 8 billion euros, at a rate of 1.4 GW per year between 2021 and 2023 and 1.5 GW per year between 2024 and 2025. The company has good visibility for 2021, with €1.1 billion already signed in the United States and several processes underway in Europe that are attracting a lot of interest. As a result, the company is on track to obtain more than 300 million euros of capital gains in 2021.

In the first quarter of the year, EDPR produced 8.1 TWh of clean energy, 5% more than the previous year, avoiding the emission of 5 million tonnes of CO2. In this way, the group continues to advance on the path towards decarbonisation, contributing to improving the outlook for the sector.