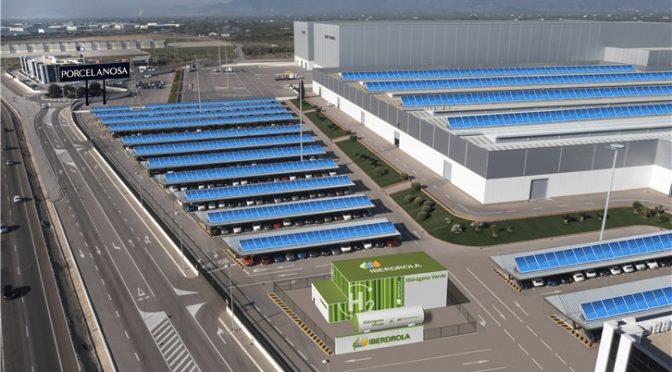 Iberdrola and Porcelanosa have launched the first project to electrify ceramic production by combining renewables, green hydrogen and heat pump technology. The so-called GREENH2SKER project is the first joint project that these two companies have launched after recently entering into an agreement to promote the decarbonisation of the industrial ceramic production process.

The purpose of the project is twofold. On the one hand, it will improve energy use and reduce CO2 emissions by developing a system that uses both green hydrogen and a heat pump to be implemented in an oven in a Porcelonosa factory in Vila-real. This solution will optimise residual thermal energy, replacing up to half of the natural gas used as fuel with green hydrogen.

The integral project includes installing an electrolyser on the Porcelanosa site, powered by a photovoltaic plant to produce green hydrogen. It will also include a technological structure that will utilise excess waste heat and heat from the production lines by means of high-efficiency systems.

By making these changes to its combustion system, Porcelanosa will integrate green hydrogen generation with the efficient use of a heat pump to avoid releasing 2,351 tonnes of CO2 /eq year and reduce the energy impact derived from its industrial activity, thus complying with the Decarbonisation Objectives set by the European Union.

This innovative solution, the first of its kind implemented in the ceramics industry, opens the road to the decarbonisation of this sector and other thermal energy-intensive industries which are currently heavy users of fossil fuels.

As well as Iberdrola and Porcelanosa, Sacmi, an international ceramic industry plant and machinery manufacturer will collaborate on the GREENH2KER project. The measure has been presented to the European Innovation Fund Small Scale Projects programme, aimed at real investment projects with highly innovative content. It will be judged according to its new technology, GHG (greenhouse gas) emissions savings and the maturity and replicability to decarbonise other industry sectors.

Iberdrola is convinced that the energy transition can serve as a driving force in the transformation of industry and recovery with a greener economy and employment. The company has, therefore, launched a historic investment plan worth 150 billion euros over the next decade, 75 billion euros by 2025, to triple renewable capacity, double network assets and take advantage of the opportunities brought by the energy revolution that the world’s leading economies are facing.

Investments in Spain total almost 14.3 billion euros by 2025, which will be spent mainly on renewables and smart networks.

After twenty years promoting the energy transition, Iberdrola is a leader in renewable energy with nearly 35,000 MW installed; a volume that makes its generation park one of the cleanest in the energy sector.

With 98 grCO2/kWh emissions, which is already two thirds lower than the European average, the investment strategy in clean energy and grids will make Iberdrola a “carbon neutral” company in Europe by 2030.