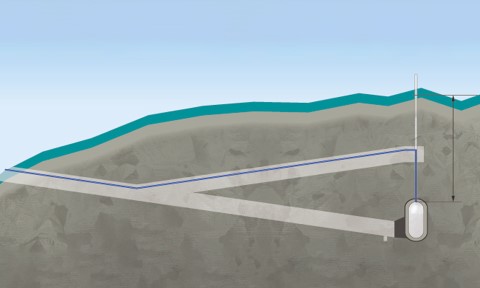 SSAB, LKAB and Vattenfall have commenced building a rock cavern storage facility for fossil-free hydrogen gas on a pilot scale next to HYBRIT’s pilot facility for direct reduction in Luleå, North of Sweden. This is an important step in the development of a fossil-free value chain for fossil-free steel. The investment cost of just over SEK 250 million is divided equally across the holding companies and the Swedish Energy Agency, which provides support via Industriklivet.

As part of the SSAB, LKAB and Vattenfall joint initiative HYBRIT , Hybrit Development AB is starting the construction of a hydrogen storage facility in Svartöberget to develop the technology for storage. Fossil-free hydrogen, which will replace coal and coke, is a crucial part of the production technique for fossil-free iron and steel production, where emissions of carbon dioxide will be virtually eliminated.

Hydrogen storages are predicted to play a very important role in future power and energy balancing, and in large-scale hydrogen production.  The storage facility is expected to be ready and operational from 2022 until 2024.

“We’re really pleased that HYBRIT is continuing to lead the development of efficient production for fossil-free steel, as we’re now also building a pilot storage facility for large-scale fossil-free hydrogen in Luleå. Storage provides the opportunity to vary demand for electricity and stabilise the energy system by producing hydrogen when there’s a lot of electricity, for example in windy conditions, and to use stored hydrogen when the electricity system is under strain,” says Andreas Regnell, Head of Strategy at Vattenfall and Chairman of the Board at HYBRIT.

“By developing a method for hydrogen storage and securing access to fossil-free electricity, we’re creating a value chain all the way out to customers where everything is fossil-free – from the mine to the electricity and to the finished steel. This is unique,” says Martin Pei, Technical Director of SSAB and Board member of HYBRIT.

“This is another important step, not just for us, but in the conversion of the entire industry. With HYBRIT, we’re also working together to develop the technology for storing hydrogen in an efficient way, which is key to being able to produce fossil-free sponge iron, the raw material for the fossil-free steel of the future. LKAB will need to become Sweden’s and perhaps Europe’s biggest hydrogen producer in the future, and this pilot project provides additional valuable knowledge for the continued work in creating the world’s first fossil-free value chain for the iron and steel industry,” says Lars Ydreskog, Director of Strategic Projects at LKAB and member of the HYBRIT Board.

The 100 cubic metre hydrogen storage is being built in an enclosed rock cavern approximately 30 metres below ground. Building the storage facility underground provides opportunities to ensure the pressure required to store large amounts of energy in the form of hydrogen in a cost-effective way. The technology used is adapted to Scandinavian bedrock conditions and will now be developed further to handle the storage of hydrogen. The storage facility is being built according to the high safety requirements that apply and checked by the responsible authorities.

Fossil-free hydrogen is central to the HYBRIT process. Hydrogen can be produced cost-effectively through the electrolysis of water using fossil-free electricity. The hydrogen produced by the electrolysers can be used immediately or stored for later use. The storage facility is based on proven technology and the hydrogen is used in the plant’s direct reduction reactor to remove oxygen from iron ore pellets. The fossil-free sponge iron resulting from the process is then used as a raw material in the manufacture of fossil-free steel.