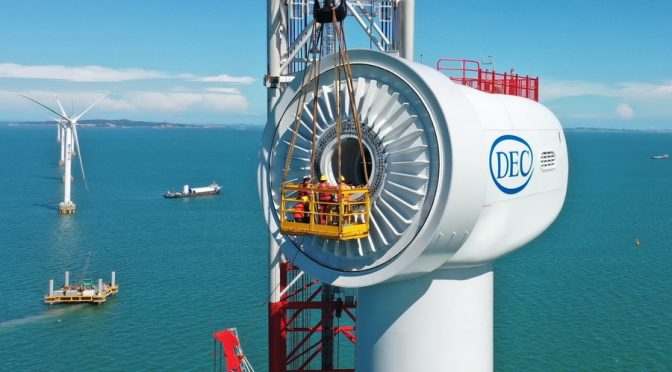 According to a report released by the Global Wind Energy Council (GWEC), a Belgium-based international trade association, China broke the world record for most wind power capacity installed in a single year in 2020, with 52 gigawatts (GW) of new capacity — doubling the country’s annual installations compared to the previous year.

“The incredible and rapid growth of wind power in the region has been led by China, which now has more wind power capacity than Europe, Africa, the Middle East, and Latin America combined,” Feng Zhao, head of market intelligence and strategy at the GWEC, was quoted by the London-based newspaper as saying.

“We were expecting an installation rush in China last year due to the phase out of the onshore wind Feed-in-Tariff by the end of 2020, but the Chinese wind market exceeded our original forecasts by over 73 percent,” Zhao added.

“Top-down policies requiring wind and solar be integrated into the power grid, rather than subsidy support, would probably drive the greater transition to renewables”, FT quoted Liang Wanliang, a China director for the GWEC, as saying.

FT noted the meeting of the Central Committee for Financial and Economic Affairs on Monday addressed that China needed “a new kind of electrical system centered around new energy”, which “interpreted by analysts as a signal of continued strong policy support for renewables”.

In addition, China’s aim to have CO2 emissions peak before 2030 and achieve carbon neutrality before 2060, and the Chinese move “sparked optimism for a breakthrough in global climate negotiations”, FT said.

On the back of the united efforts, the share of clean energy consumption in China has risen from 19.1 percent in 2016 to 24.3 percent in 2020, data released by China’s National Bureau of Statistics showed.