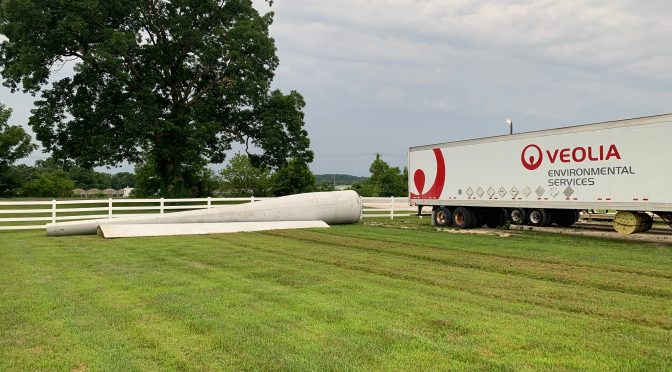 Castilla y León is developing a pioneering project worth 9.77 million euros to develop comprehensive technology for recycling components of old wind turbines before the end of their useful life, according to data from the Ministry of Economy. The Community Government, wind energy developers and recycling companies, with the support of a community technology center, are promoting this technologicalwind power project that has been submitted to the call for Expressions of Interest of the Government of Spain, aimed at promoting circular economy at the enterprise level.

Castilla y León is thus promoting the development of a new industrial technology for the comprehensive recycling of wind turbines through a public-private partnership consortium.

This project, developed through the Regional Energy Agency of Castilla y León (EREN), the Fundación Patrimonio Natural de Castilla y León (FPNCYL), together with the companies of the Ruralia and Reciclalia SL sector, and the Technological Center of Miranda de Ebro (CTME), has been presented, led by Reciclalia, to the call for Expressions of Interest convened by the Government of Spain for the development of the circular economy in the field of business.

The project foresees the start-up of a plant in the Environmental Business Park of Soria and, later, the start-up of a second-component transformation plant in a Just Transition environment would be studied to meet the demand for dismantling and rehabilitation of parks in the northwest of the Peninsula and with the capacity to treat parks in the rest of Spain and the European Union. The project, which has been submitted to the call for Expressions of Interest of the Ministry for the Ecological Transition and the Demographic Challenge, encompasses both plants with a global budget of 9.77 million euros.

The technological project will develop a cutting system at the sites of the material to be recycled and then implement an advanced recycling system for the composite material, especially shovels and nacelle lids where the generating equipment is housed. Likewise, the recycling of fiberglass and carbon due to the appearance of resins and other components implies a greater technological complexity in which the processes with Reciclalia S.L. technology is developing. and CTME.

The research focuses on the analysis and treatment of the complete recycling of the wind turbine, which is essential for the business plan to offer this comprehensive technological service to wind farms.
Recycling of wind blades in Castilla y León

For the next three years, the removal of the lower power turbines installed in the 1990s or early 2000s is expected, which may progressively affect some 3,600 wind turbines and some 21,000 tons of blades. Castilla y León, which installed the first wind farm in 1998, currently has 6,269 MW installed in 245 wind farms with a total of 4,542 installed wind turbines.

The recovery of materials and high quality recycling are two basic principles of the Circular Economy Strategy of Castilla y León, thus avoiding the need to consume virgin raw materials and the CO2 emissions associated with the manufacturing processes of new materials. .

In line with what is proposed in the Regional Strategy, the recovery of the components of the machinery that are still in good condition, or the recycling of materials, are two aspects in which the Association of Wind Developers of Castilla y León (APECYL) sees it as an opportunity for the sector in the Autonomous Community, as a source of economic activity for the withdrawal of components and materials, their sale, and the reuse and recycling of materials and even complete turbines.

Carbon fiber and fiberglass are the main materials for wind turbine blades that can be recovered and have a second life, with reuse in the same wind industry, or in others such as the naval industry, the materials manufacturing industry. sports or urban furniture, manufacturers of containers, swimming pools and construction elements in general, and it is expected that new applications for recycled material will emerge.

It is estimated that up to 97% of the materials of a wind turbine could be recycled, with the aim of recycling the entire machine (blades, nacelle, tower, engine …) and thus avoid waste.