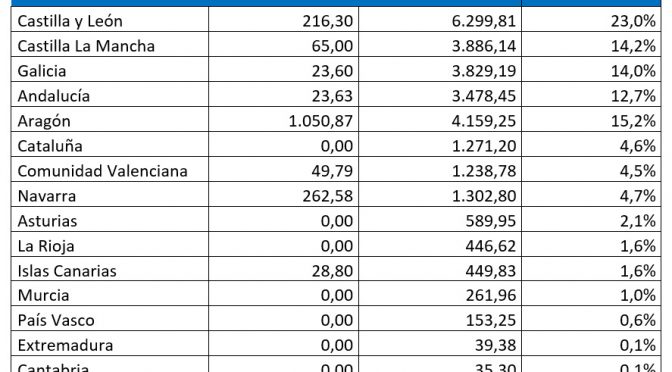 According to data compiled by the Asociación Empresarial Eólica (AEE), the installed capacity in Spain of wind energy reaches 27,446 MW. In 2020, a total of 1,720 MW of wind power were installed.

The autonomous community with the largest installation in 2020, Aragón, has gone from having the fifth position in installed power in 2019, to holding the second position thanks to the installation of more than 1 GW of new power in 2020 for the second consecutive year ( something that even few European countries achieve). The Aragonese government’s favorable policies for investment in wind energy have had a very positive effect on the sector in the autonomous community and show that, with the political push and the necessary administrative improvements, wind energy is an important element of economic growth (with more than 1,000 million euros of investment last year) and employment in the territories in which it is committed.

In total, there are 1,267 wind farms in Spain, with 21,431 wind turbines installed, which cover 21.9% of electricity consumption. Likewise, we have more than 220 manufacturing centers present in sixteen of the seventeen autonomous communities. The 5 wind turbine manufacturers that have installed most of the wind farms are Siemens Gamesa, Vestas, GE, Nordex-Acciona WindPower and Enercon. In Spain we have 100% of the complete supply chain dedicated to the domestic and export markets.

The five developer companies that have installed the most megawatts of wind power throughout 2020 have been Repsol Renovables, Copenhagen Infrastructure Partners (CIP), Iberdrola, Enel Green Power / Endesa and Naturgy.

“2020 has been a positive year in which wind power has recovered an annual rate of installation of new power comparable to that experienced in the best years of the sector, when it was possible to advance in a linear manner, year after year, pulling the entire chain of value in our country. The challenge in this new decade is to achieve the installation of 2.2 GW per year on average, in a sustained manner over time, in order to reach the 50.3 GW included in the PNIEC. If the appropriate mechanisms and strategies are established, we will achieve, in addition to meeting the power objectives, sustaining and even strengthening the manufacturing chain located in Spain ”, says Juan Virgilio Márquez, CEO of the Wind Energy Business Association.

2021 has started with a new renewable auction, which inaugurates the calendar approved by the Government until 2025. The design of the January 2021 auction has positive aspects compared to previous auctions and there are still some points for improvement, which will be necessary to go tuning in the next calls. Auctions are dynamization tools to ensure the degree of progress towards certain objectives, and their design is an aspect of vital importance. However, to achieve compliance with the PNIEC, the auctions must coexist with the development of wind projects via PPAs or directly to the market with coverage.

From AEE we promote the establishment of adequate mechanisms that aim to capture the value of technologies, that allow us to take care of our industrial value chain as a priority, and that enhance our positioning in innovation as a pillar for the future.

“The wind sector is a high value-added component of our economy, which covers multiple dimensions: energy, industrial, climate, technological innovation, value-added employment, regional development and international presence. With the increase in wind power and the greater coverage of electricity demand, we are at an opportune moment.