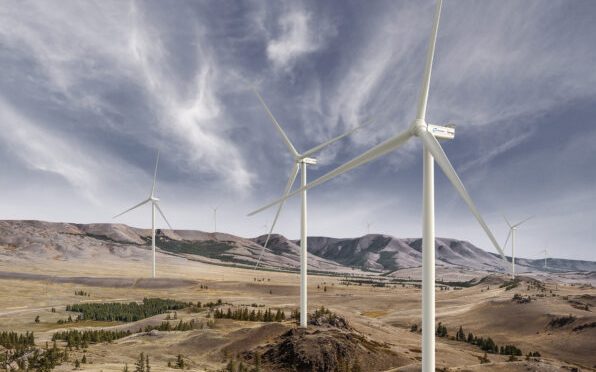 Wind energy is electricity created from the naturally flowing air in the Earth’s atmosphere. As a renewable resource that won’t get depleted through use, its impact on the environment and climate crisis is significantly smaller than burning fossil fuels.

Wind energy can be created by something as simple as a set of 8-foot sails positioned to capture prevailing winds that then turn a stone and grind grain (a gristmill). Or it can be as complex as a 150-foot vane turning a generator that produces electricity to be stored in a battery or deployed over a power distribution system. There are even bladeless wind turbines.

Currently, there are over 60,000 wind turbines running in the United States, found in 41 states, Guam, and Puerto Rico. Wind generated about 7% of the electricity in the U.S. in 2019.1???? Worldwide, it provides about 6% of the world’s electricity needs.2???? Wind energy is growing year-over-year by about 10% and is a key part of most climate change reduction and sustainable growth plans in a variety of countries, including China, India, Germany, and the United States.3????

Human beings use wind energy in a variety of ways, from the simple (it’s still used to pump water for livestock in more remote locations) to the increasingly complex — think of the thousands of turbines that dominate the hills that cut through highway 580 in California (pictured above).

The basic components of any wind energy system are fairly similar. There are blades of some size and shape that are connected to a drive shaft, and then a pump or generator that either uses or collects the wind energy. If the wind energy is used directly as a mechanical force, like milling grain or pumping water, it’s a called a windmill; if it converts wind energy to electricity, it’s known as a wind turbine. A turbine system requires additional components, such as a battery for electricity storage, or it may be connected to a power distribution system like power lines.

Nobody really knows when the wind was first harnessed by a human being, but wind was definitely being utilized as a way to move boats on Egypt’s Nile River around the year 5,000 BC. By 200 BC people in China were using the wind to power simple water pumps, and windmills with hand-woven blades were used to grind grain in the Middle East.4???? Over time, wind pumps and mills were used in all kinds of food production there, and the concept then spread to Europe, where the Dutch built large wind pumps to drain wetlands — and from there the idea traveled to the Americas.

Wind is produced naturally when the sun heats the atmosphere, from variations in the surface of the Earth, and from the planet’s rotation. Wind can then increase or decrease as a result of the influence of bodies of water, forests, meadows and other vegetation, and elevation changes. Wind patterns and speeds vary significantly across terrain, as well as seasonally, but some of those patterns are predictable enough to plan around.

The best locations to place a wind turbine are the tops of rounded hills, on open plains (or open water for offshore wind), and mountain passes where wind is naturally funneled through (producing regular high wind speeds). Generally, the higher the elevation the better, since higher elevations usually have more wind.

Wind energy forecasting is an important tool for siting a wind turbine. There are a variety of wind speed maps and data from the National Oceanic and Atmospheric Administration (NOAA) or the National Renewable Energy Laboratory (NREL) in the U.S. that provide these details.

Then, a site-specific survey should be done to assess the local wind conditions and to determine the best direction to place the wind turbines for maximum efficiency. For at least a year, projects on land track wind speed, turbulence and direction, as well as air temperatures and humidity. Once that information is determined, turbines that will deliver predictable results can be built.

Wind isn’t the only factor for siting turbines. Developers for a wind farm must consider how close the farm is to transmission lines (and cities that can utilize the power); possible interference to local airports and plane traffic; underlying rock and faults; flight patterns of birds and bats; and local community impact (noise and other possible effects).

Most larger wind projects are designed to last at least 20 years, if not more, so these factors must be considered over the long term.

These are large-scale wind projects designed to be used as a source of energy for a utility company. They are similar in scope to a coal-fired or natural gas power plant, which they sometimes replace or supplement. Turbines exceed 100 kilowatts of power in size and are usually installed in groups to provide significant power — currently these types of systems provide about 7% of all energy in the United States.

These are generally utility-scale wind energy projects that are planned in the waters off coastal areas. They can generate tremendous power near larger cities (which tend to cluster closer to shore in much of the United States). Wind blows more consistently and strongly in offshore areas than in land, according to the U.S. Department of Energy. Based on the organization’s data and calculations, the potential for offshore wind energy in the U.S. is more than 2,000 gigawatts of power, which is two times the generating capacity of all U.S. electric power plants. Worldwide, wind energy could provide more than 18 times what the world currently uses, according to the International Energy Agency.

This type of wind energy is the opposite of the examples above. These are wind turbines that are smaller in physical size and are used to meet the energy demands of a specific site or local area. Sometimes, these turbines are connected to the larger energy distribution grid, and sometimes they are off-grid. You’ll see these smaller installations (5 kilowatt size) in residential settings, where they might provide some or most of a home’s needs, depending on weather, and medium-sized versions (20 kilowatts or so) at industrial or community sites, where they might be part of a renewable energy system that also includes solar power, geothermal, or other energy sources.

How Does Wind Energy Work?

The function of a wind turbine is to use blades of some shape (which can vary) to catch the wind’s kinetic energy. As the wind flows over the blades, it lifts them, just like it lifts a sail to push a boat. That push from the wind makes the blades turn, moving the drive shaft that they’re connected to. That shaft then turns a pump of some kind — whether directly moving a piece of stone over grain (windmill), or pushing that energy into a generator that creates electricity that can be used right away or stored in a battery.

The process for an electricity-generating system (wind turbine) includes the following steps:

Ideally, a windmill or wind turbine is located in a place with regular and consistent winds. That air movement pushes specially designed blades that allow the wind to push them as easily as possible. Blades can be designed so they are pushed upwind or downwind of their location.

Kinetic energy is the free energy that comes from the wind. For us to be able to use or store that energy, it needs to be changed into a usable form of power. Kinetic energy is transformed into mechanical energy when the wind meets the windmill blades and pushes them. Then, a physical object moved by the blades turns a drive shaft — that energy can now be captured.

In a wind turbine, a spinning drive shaft is connected to a gearbox that increases the speed of the rotation by a factor of 100 — which in turn spins a generator. This rotation turns an internal shaft connected to a gearbox, which increases the speed of rotation by a factor of 100. Therefore, the gears end up spinning much faster than the blades being pushed by the wind.

Once these gears reach a fast enough speed, they can power a generator that produces electricity. The gearbox is the most expensive and heavy part of the turbine, and engineers are working on direct drive generators that can operate at lower speeds (so they don’t need a gear box).

The electricity produced by the generator is 60-cycle AC (alternating current) electricity. A transformer may be needed to convert that to another type of electricity, depending on local needs.

Electricity Is Used or Stored

Electricity produced by a wind turbine might be used on site (more likely to be true in small or medium-sized wind projects), it could be delivered to transmission lines for use right away, or it could be stored in a battery.

More efficient battery storage is key for advancements in wind energy in the future. Increased storage capacity means that on days when the wind blows less, stored electricity from windier days could supplement it. Wind variability would then become less of an obstacle for reliable electricity from wind.

What Is a Wind Farm?

A wind farm is a collection of wind turbines that form a type of power plant, producing electricity from wind. There’s no official number requirement for an installation to be considered a wind farm, so it could include a few or hundreds of wind turbines working in the same area, whether on land or offshore.

The five largest wind farms in the world are located in China, and that country has eight of the ten largest wind farms, with Alta Wind Energy Center in the Mojave Desert of the U.S. and Muppandal Wind Park in India completing the top 10.

Gansu in China, the world’s largest wind farm, produces 6,800 megawatts of electricity, but it is underutilized, since it’s located 1,000 miles from the cities that could most use the power, pointing to the importance of siting when choosing a wind farm location.