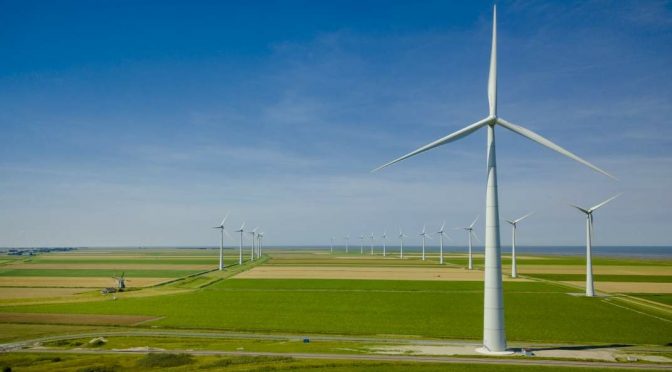 The installation of the nine E-136 EP5s wind turbines is part of a repowering project to replace 16 old wind energy converters at the Nij Hiddum-Houw wind farm in the Netherlands with the more efficient ENERCON models featuring permanent magnet generator technology. ENERCON is installing the strong-wind WECs of the EP5 programme for the utility Vattenfall and the investment company with public participation Gooyum-Houw BV.

“The wind farm is located at one of the best onshore wind sites in the Netherlands, at the eastern end of the Dutch motorway A7, otherwise known as Afsluitdijk”, explains Daniël Dubbelhuis, ENERCON Sales Manager in the Netherlands. “Thanks to this man-made dyke, constructed between 1927 and 1932, safe population of the region was possible and resources offered by the land that was gained could be used – as will be possible with the new wind energy converters at the site.” The average wind speed here at the wind farm is over 9 m/s at hub height.

Each E-136 EP5 with a hub height of 109 metres and a rotor diameter of 136 metres will feed in an installed capacity of 4.65 megawatts. With a total installed capacity of 42 megawatts, the wind farm will produce 160,000 MWh per year. This is equivalent to the amount of electricity consumed by around 46,000 households per year. The first preparations at the wind farm, such as the construction of the crane platforms, already began in December. The start of construction is scheduled to begin in the second half of 2021. Commissioning of the wind farm is planned for the second half of 2022.