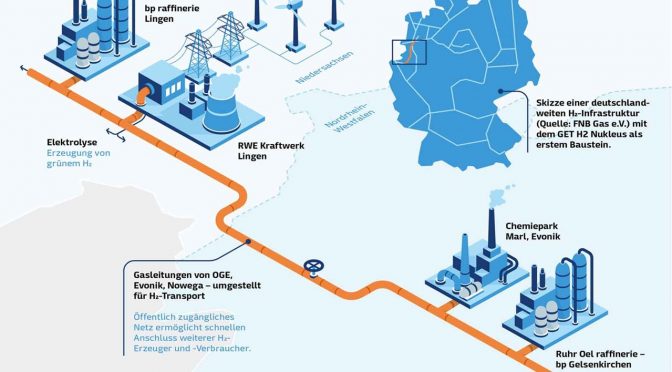 The GET H2 Nukleus project continues to take shape. The aim is to create the country’s first publicly accessible hydrogen network with scalable industrial production of green hydrogen. The hydrogen consortium around RWE Generation, bp, Evonik, Nowega and OGE has now submitted an application for funding from the EU Innovation Fund.

In concrete terms, the funding application is for the assumption of part of the investment and operating costs of RWE and bp for the production and purchase of green hydrogen in the GET H2 Nukleus. The funding applied for amounts to a medium double-digit million euro amount spread over ten years. A funding commitment would be important in order to bring the project to economic viability in the context of the ramp-up of climate-neutral hydrogen aimed at achieving the climate targets and to enable binding investment decisions to be taken.

GET H2 Nukleus aims to initiate the national expansion of a hydrogen economy along the value chain in Germany. To this end, RWE Generation plans to build a 100-megawatt electrolysis plant on the site of its gas power station in Lingen as a first step. The largest existing plant of this kind in Germany will probably produce two tonnes of green hydrogen per hour from 2024. This hydrogen will be transported in existing pipelines of the natural gas pipeline network to the bp refinery in Gelsenkirchen, to Evonik’s Marl Chemical Park and possibly to other customers.

Hydrogen is already an important component in the chemical industry today and will play an even greater role in the future. In the Marl Chemical Park, for example, it is evident how versatile hydrogen is already being used today. The material is used on the site, which has almost 20 companies, in almost every laboratory and every plant – and almost always in decisive processes.

At the bp refinery in Gelsenkirchen, green hydrogen is expected to save 105,000 tonnes of CO2 per year. Over the funding period of ten years, this would mean a total saving of around 1 million tonnes of CO2. In support of the EU Innovation Fund application, the use of green hydrogen at the bp refinery in Gelsenkirchen was analysed in detail in a technical study. This confirmed the basic feasibility.

In order for the entire project to progress rapidly, it requires not only funding but also the right governmental framework conditions – for example, the EEG surcharges on the electricity used in hydrogen production must be reduced and legal regulations for the operation of the hydrogen networks must be in place so that the existing gas pipelines can be converted. For future customers such as bp, the ability of green hydrogen to be counted towards its greenhouse gas reduction targets is crucial.

The EU Innovation Fund (EU IF) is one of the world’s largest funding programmes for the demonstration of low-carbon technologies and processes. It focuses on flagship projects with the potential for significant emission reductions. After reviewing the application, the EU IF is expected to decide by spring 2021 whether GET H2 Nukleus will be approved for the second application phase. By the end of 2021 it will be clear whether the GET H2 Nukleus will be eligible for funding.