Ceará is emerging as an important producer and supplier of wind turbines for offshore wind energy for the coming years. After the signing of the memorandum of understanding between the Government of the State of Ceará and the Chinese Mingyang Smart Energy, in September of this year the installation of a large industry of wind turbines for wind farms in the ocean advances at a dizzying pace. 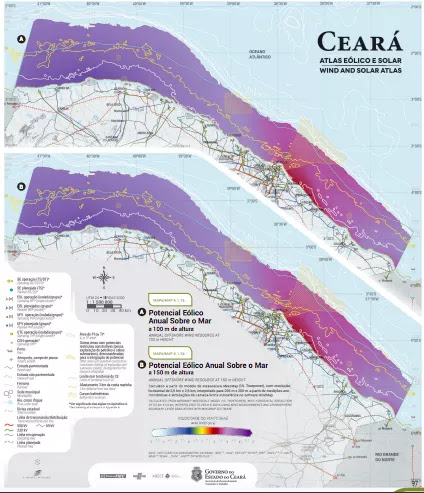 This week, the vice president of the Chinese multinational, Larry Wang, returned to Ceará to define the details of the installation of the factory in Complexo do Pecém. This Monday (19), Mr. Larry was received by the Secretary of Economic Development and Labor, Maia Júnior, and by the Executive Secretary of Industry, Roseane Medeiros. The vice president accompanied by the regional manager of Mingyang, Ben Gao, underlined the intention of the Chinese group to transform the Port of Pecém into an export center for wind turbines for offshore wind power plants both to Brazil and abroad.
“We, from the State Government, are working in an agile manner and with the commitment to create conditions to attract companies producing renewable energy to Ceará. We are committed to providing all institutional support for the Mingyang project to consolidate. We are very happy and excited to establish this clean energy matrix in Ceará and Brazil ”, says Sedet, Maia Júnior. To settle in Ceará, the company also considers factors such as geographic location, which ensures the potential for electricity generation from renewable fuels and the infrastructure of Porto do Pecém. Sedet is institutionally supporting the viability of building a tower for the multinational China. “The company produces and operates wind turbines and offshore wind farms in China and wants to understand the conditions on our coast,” said Sérgio Araújo, coordinator of the Attraction for the Structuring of Industrial Companies in Sedet.

Mingyang decides on the details of the factory installation in Pecém, and wind generation projects are gaining momentum. Local and international businessmen are taking steps to make possible the installation of 4 wind farms, approving the force of the wind that blows in the sea, in Caucaia (1), Camocim (1) and Amontada (2).
The Asa Branca Maritime Wind Farm project is expected to produce 400 MW off the coast of the municipality of Amontada, in an area of ??15 km off the mainland, at a distance of between 3 km and 8 km from the beach. The development will have its own Transmission Line and foresees the use of low-floor self-elevating platform ships to install the foundations, transition parts, towers, gondolas, oars, electrical / submarine control cables and the surrounding rock formation.
BI Energy has projects for the installation of offshore wind farms in Caucaia and Camocim. In Caucaia, on Icaraí beach, the wind farm will have 48 wind turbines on the coast and 11 semi-coastal wind turbines, for a total of 598 MW of power. In Camocim, BI Energia’s second offshore wind project will have 100 wind turbines and an installed capacity of 1.2 GW. The wind farm received authorization from Ibama to develop an environmental impact study and foresees an investment of R $ 14 billion.
Neoenergia (iberdrola), one of the main private groups in the electricity sector, is also analyzing the opportunities of Ceará’s offshore wind potential. The company is developing preliminary studies and beginning to request licenses from Ibama for the Amontada wind farm that will produce 3 GW with a transmission line and a substation on the ground.
Mingyang Smart Energy was founded in 1993, based in Zhongshan Guangdong, China. Mingyang Smart Energy is a first-class wind turbine manufacturer and provider of integrated clean energy solutions. The company has 16 factories located in China and India. It operates in the wind and solar energy sectors, ranking 37th among the 500 largest new energy companies in the world and 1st in offshore wind power innovation.