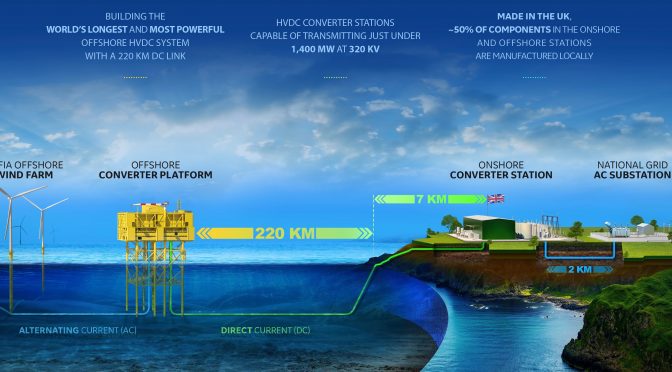 When the English playwright Thomas Heywood used the phrase “as common as coals from Newcastle” — pointing out something that was just plain ordinary — his London audience knew exactly what he was talking about, even in the early 1600s. For centuries, the abundance of coal around Newcastle-upon-Tyne in northeast England not only helped shape English idioms, but it also fueled the industrial revolution in the north of the country and, when electricity became the dominant form of energy, the majority of British power generation. As recently as 1990, the U.K. drew 67% of electricity from coal-fired power plants.

Today, the area is once again playing a role in a revolution, albeit of a very different kind. Like many countries, the U.K. is powering through an energy transition designed to reduce the nation’s carbon footprint, and it’s moving fast. The country is on track to obtain half of its electricity from renewable energy sources by 2030. A large share of the cleaner supply — as much as 40 gigawatts — will come from huge offshore wind farms rising from the waters surrounding the British Isles.

But that future comes with challenges. It means placing hundreds of towering turbines in the frigid, blustery expanse of the North Sea. And it also involves building huge, impregnable offshore fortresses called converter stations — so remote they come with helipads — that pool the electricity generated by the dispersed turbines and package it for transmission to land through an undersea cable.

One of those huge offshore wind farms — Sofia, conceived by the utility giant RWE — will rely on the latest generation of power transmission technology, called high-voltage direct current. HVDC can transmit power much more efficiently over long distances compared to wires carrying alternating current (AC), which today is the most common form of transmission for bulk power. In fact, because of efficiency and other benefits, HVDC lines have been proliferating throughout the world, onshore and offshore.

But as offshore farms started to grow in size and moved farther away from shore, even HVDC systems have started to run into limitations. “The potential for wind intensity is much higher if you go deeper into the sea,” says Raj Iyer, grid integration leader at GE Renewable Energy’s Grid Solutions division. “The only constraint that was there until now was the transmission technology and the economic feasibility of that technology.”

Iyer has a vantage point on the issue. His business specializes in building some of the world’s most advanced power transmission systems. It recently won a contract, together with Sembcorp Marine, to bring electricity from Sofia through a 220-kilometer-long subsea cable that will terminate near the village of Lazenby, about an hour south of Newcastle. When it’s completed in the middle of this decade, the Sofia wind farm will have the capacity to generate 1.4 gigawatts. The GE component of the project will involve building one of the most powerful and most remote offshore HVDC converter stations in world.

The last such converter station GE designed now serves off the coast of Germany. The DolWin3 project, which came online in September 2018, collects electricity from some 180 wind turbines and can transmit up to 900 megawatts to the shore through a cable that runs 80 kilometers under the water. Technological breakthroughs allowed GE engineers to design a converter for Sofia that, at 1.4 gigawatts, is more powerful and also comparatively smaller and lighter. The reduction in weight, as well as a commensurate shrinkage in size, are key, says Neil Beardsmore, executive commercial leader for grid integration solution in GE’s Grid Solutions unit. “It’s very important in the sense of weight equals money when you go offshore,” Beardsmore says. “One element of weight is the ability to install it. So you can imagine there are not many vessels out in the ocean that have a crane that’s capable of lifting beyond 15,000 tons. Beyond that, we have to use a different methodology for installing it, and the cost increases.”

The ability to make those weight savings — and, in turn, to bring more renewable energy on the grid from further at sea — comes down to a technology called a VSC, or voltage-sourced converter, valve. Stacking together like computer racks, the valves convert the alternating current coming from the wind turbines into direct current in the offshore converter stations. On land, a sister converter, like the one to be built in Lazenby, switches the DC back to AC, so it can be connected to Britain’s National Grid network.

VSC valves have been around for more than a decade, and serve as a key component in modern HVDC networks. But the technology has been quickly evolving. The Sofia converter will use a new generation of VSC technology designed by engineers at Grid Solutions’ HVDC research park in Stafford, England. The team there has been able to shrink the individual valves and pack more of them inside the converter station, similar to how chip designers following Moore’s law crammed more transistors onto a piece of semiconductor. “This is a play of density that allows us to be compact and competitive,” Iyer says. “The second generation of valves gives us the competitive advantage, and also the advantage of footprint, which allows the platform to be smaller and more compact.”

But the VSC valve is not the whole story. “The valve is the heart of the converter station, but it also needs a brain,” Iyer says. The brain is an automatic system of digital controls that links thousands of valves, switchgear, transformers and other parts of the system with fiber-optic cables and controls them with software. “That again reduces the complexity of installation — it reduces the footprint and the cost,” Iyer says. He says GE’s eLuminaTM system allows operators to cut the amount of control equipment by half and substantially reduce the number of cables compared to typical HVDC designs.

The brain allows operators to run preventative analytics — making sure that everything is running as it should and the system is transmitting power — but also looks ahead to the future. “It can tell us in advance whether something needs to be treated during the next planned maintenance so that you don’t have a surprise outage in the transmission, which is costly because that’s loss of revenue,” Iyer says.

GE will be making the converter components in Stafford. Construction of the wind farm is due to begin onshore at the Lazenby converter station site early next year. The offshore construction is expected to get underway in 2023.