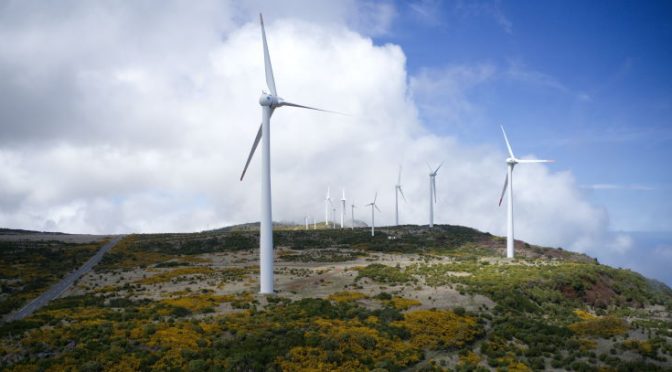 In Senj, a small city on the Adriatic coast of western Croatia, locals are used to the sight of heavy-duty vehicles transporting supersized machines. In the Velebit Mountains a few kilometers away, Chinese and Croatian workers are constructing the country’s largest wind farm.

In November 2017, China’s Norinco International signed an agreement with Croatia’s Energija Projekt — a company specially set up to run the 156 Megawatt (MW) Senj Wind Farm — on the purchase of a 76-percent stake in the project and obtained the right to construct and operate it for 25 years.

The project, which includes 39 wind turbines (four MW each) and supporting facilities, is expected to be completed in April 2021.

The wind farm is located in a dense mountain forest near Senj. A very strong cold wind unique to the Adriatic Sea, known as “bora” by the locals, is frequent here. In winter, wind speeds can reach up to 200 kilometers per hour. It is no easy task to transport the giant equipment to the construction site at a height of 1,100 meters and complete the installation in adverse weather.

Norinco uses high-capacity offshore wind power technologies and extremely tall (100-meter) towers at the Senj site to harness the high winds. The towers have a diameter of 4.62 meters at their base. Each nacelle weighs 145 tons. A single blade is 67 meters long and weighs over 20 tons.

The wind farm covers an area of approximately 65 square kilometers. Preparing for the construction has been an exceptionally complex task, Norinco’s installation manager Ding Decai told Xinhua. Sixty kilometres of roads had to be built on the hillsides to enable the movement of heavy vehicles.

According to Ding, assembling a wind turbine requires a 500-ton truck crane and a 650-ton crawler crane, as well as four auxiliary cranes that cooperate with the bigger cranes. The crawler crane has a 120-meter boom and a 1,000-ton counterweight. The complete machinery cannot be driven to the construction site: it is disassembled and transported by 40 trucks to the designated location for reassembly.

At the Senj wind farm, the blades can only be connected to the hub in mid-air using cranes. “It’s just like using huge machinery to thread the needle at 100 meters above the ground,” Ding explained.

The COVID-19 outbreak at the beginning of this year inevitably affected the manufacturing and shipment of the equipment, Liu Zhen, general manager of Norinco’s Zagreb branch, told Xinhua. The arrival of the first shipment of equipment at the port of Zadar in early April coincided with the peak of the outbreak in Croatia. The shipment was therefore stranded in the port for three months.

Leo Jerkic, chief supervision engineer from Megajoule, a wind and solar consultancy and engineering company, said that despite the obstacles encountered during the development phase, now “everything is more or less settled and we are progressing very well on the construction itself.”

The 80-odd Chinese and over 100 Croatian workers have already completed 50 percent of the contract value. They are expected to complete civil constructions by the end of this year and get the first 13 turbines connected to the grid.

“We are very satisfied to be in such a good relationship with our Chinese colleagues. We believe this is just the first step and many more projects will follow here in Croatia and even in wider Europe,” said Jerkic.

Shan Jun, deputy general manager of Norinco, said that his company is confident and capable of completing the project. “We want to set a good example for China-Croatia cooperation in energy and trade,” he said.