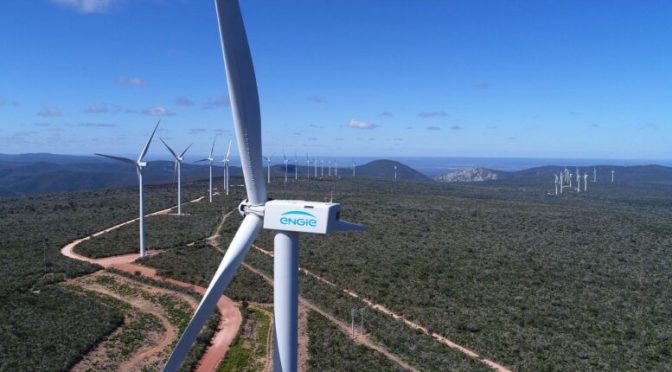 Wind power technology, surprisingly, continues to suffer from great misunderstanding among some sectors; and it is the subject of criticism and even hoaxes despite being a basic instrument to achieve an energy model away from fossil fuels and being totally necessary to face the fight against the climate crisis.

These are some of the myths.
Wind turbines impact the landscape

Since human beings inhabit the Earth, they carry out activities that affect the landscape. The word landscape comes from the French paysage, a contraction of pays and visage. This means that the landscape is the face of the country. This face is the visible face of the natural systems that have developed in the territory. Natural systems have another much less visible face: the ecological functions that they perform and that are the basis on which human societies are based and their functioning.

On the other hand, the concept of landscape is a modern construction created by the inhabitants of industrialized-productivist-consumerist cities, the functioning and life of which is seriously affecting natural systems.
Wind turbines are concentrated in certain territories

The use of the wind resource must obviously be done in places where there is a wind regime that makes the production of electricity sufficient to offset the cost of the wind farm. Catalonia has a diverse territory, and not everywhere is windy enough to take advantage of it. Modern wind turbines have greatly increased their ability to capture and extract energy from the wind and transform it into electricity.

This means that nowadays wind turbines can be installed in places where, with towers of 20 m in height, it was previously impractical to make any use, and to place 100 m towers. or more in height and blades of more than 50 m. long where it is perfectly feasible to make wind farms. However, we have large areas of territory where it is unthinkable and unfeasible (such as the interior plains of the country) to exploit wind power.
Better to put small wind turbines than big ones

E.F. Schumacher made his well-known motto “small is beautiful” fashionable, but he himself wrote that this motto should not be interpreted literally: “small, obviously, does not mean infinitely and absurdly small, but rather that the order of magnitude must to be the one that the human mind can encompass ”. But what exactly is this order of magnitude? Godfrey Boyle, pioneer of the alternative technology movement in the 70s, was questioned within the framework of the Alternative Research Group of the English Open University, asking:

“How big can small get before it stops being pretty?” and, “How small can big get before ceasing to be efficient?” Godfrey Boyle himself, already at the end of the 70s, advised “to concentrate efforts on the development of technologies and products to meet human needs not at a family or domestic scale, but at a community scale”, although recognizing that “certain types of technologies make sense at the household scale, other types at the small community scale, others at the regional and even national level ”. Today it has been widely demonstrated that a ‘large’ wind turbine, in the 2-4 MW range, is much more efficient (ecologically and economically) than one of 20-40 100 kW wind turbines, such as those made in the late 1990s. 80s and early 90s.
Wind turbines kill birds

This myth is still too widespread, but the facts (observed in numerous studies carried out in various places where there are wind farms) show that the main causes of bird deaths are impacts on the facades of glass skyscrapers and attacks by domestic cats . And at the end of the tables the wind power appears. In between there are several causes: collisions and electrocution in high voltage networks and collisions with vehicles, pesticide poisoning and so on.

The same operators of wind power facilities are the first interested in minimizing the impact on the birds. So much so, that even, in certain sensitive migration areas, wind turbines are equipped with devices that detect birds and stop the machine. The previous environmental impact studies and their corrective measures serve to avoid the risk of these mishaps.
Better that each one produces their electricity

Other myths are spread by those who claim to defend wind energy, but who in practice oppose wind farm projects that they describe as large installations. They come to say that “Energy democracy is equivalent to each one making himself the electricity he needs.”

It is true that each person and each family can generate with the Sun (PV and thermal technology) or with wind power (micro-wind generator); all or part of the energy you use in your daily life. There’s no doubt. Now, this is not what is meant by democratizing energy.

Democracy applied to energy goes much further than the simple self-generation of energy individually: it is that energy system that empowers people and communities to have local sources of renewable energy to take advantage of their capture, transformation and use. AND

But this includes not only generation, storage, distribution, use, exchange and more not only individually but also collectively. And any collective installation, be it solar or wind) will always be larger than a family installation.
They affect health

Among the other myths that have spread around technologies for the use of wind, there are some very curious, such as those that say that wind turbines affect health. If this were the case, the inhabitants of many areas of the planet that have hundreds of wind turbines in operation since the 1990s would be ill, which has not happened.
The wine turns sour

There are also those who have affirmed in our country that wind turbines in wine-growing areas made wine sour. If this were the case, there would be no viticulturists who have wind farms among their vineyards and who have even put a trade name on the wine they put on the market related to wind (Le Domain du Chant d’Eole). Others even say that wind power destroys rural tourism, when in many places the facts show precisely the opposite (Quévy-le-pequeno, Sur les chemins d’Éole).