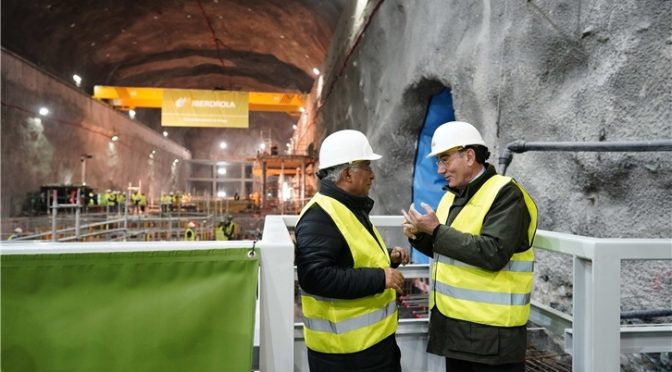 Iberdrola reinforces its commitment to renewables in Portugal, following today’s announcement of the official results for the recent capacity auction, where the company has been awarded a connection to the grid in the Algarve for a hybrid photovoltaic project, with 83 megawatts (MW) installed capacity, with 14 MW of storage, which will stabilise the system and manage discharge into the grid at times of high demand.

With this latest award, Iberdrola will reach a total of 1,519 MW of renewable capacity in Portugal: 1,158 MW in hydroelectric technology, 255 MW photovoltaic, 14 MW battery storage and 92 MW of existing wind energy in operation.

With an investment of over €1.5 billion, the project includes the construction of three dams and three power plants (Gouvães, Daivões and Alto Tâmega) with a combined capacity of 1,158 MW including a pumping station, which will become one of the largest energy storage facilities in Portugal.

In addition, the company is progressing development of 172 MW solar capacity awarded in August 2019 in the Algarve and Tagus Valley regions and already operates three wind farms with a total of 92 MW capacity, involving an investment of €200 million euros.

With the Tâmega complex and the new solar capacity awarded, Iberdrola – which has reduced its emissions in Europe by 75% since 2000 – is contributing to Portugal’s commitment to achieving carbon neutrality by 2050.

In the Portuguese electricity market, Iberdrola leads the industrial – large consumer segment, with a market share of 28% while serving around 400,000 electricity and gas customers. The company also has the country’s third largest market share in terms of electricity customers (5.9%) and the second largest in demand (5.7%). In Portugal, Iberdrola contributes with an innovative and sustainable approach, selling 100% green electricity to its customers.

In recent months, Europe has shown the competitiveness of renewable energy sources as the main vector for achieving the electrification of the economy. Iberdrola has demonstrated once more its ability to compete in the latest renewable capacity auctions in the Continent: in addition to Portugal, the company was awarded three wind farms in Greece this summer, with a combined capacity of 98.1 megawatts (MW).

Iberdrola is confident that electrification will act as a lever for change in the post-COVID world and has therefore accelerated investment to help revitalise economic activity and job creation.

This commitment to a green recovery will see record investments this year of €10 billion in renewable energy, smarter electricity networks and large-scale storage systems, after having spent €100 billion globally since 2001.

Iberdrola is a global renewable energy leader with an installed capacity of 32,695 MW, making its generation fleet one of the cleanest in the energy sector. As of June, the company’s renewable energy project pipeline exceeded 58,000 MW.