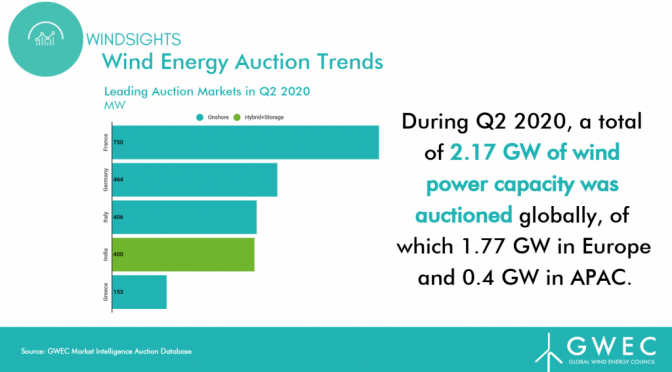 The Global Wind Energy Council has released its quarterly update on the global wind auctions database, a key tool for the wind industry to stay updated on all the latest developments and business opportunities for markets around the world.

Although the COVID-19 pandemic has impacted wind auctions globally, many countries have shown resilience in the face of the crisis and have continued driving growth of the industry.

During Q2 2020, a total of 2.17 GW of wind power capacity was auctioned globally, of which 1.77 GW was in Europe and 0.4 GW in Asia-Pacific. These results are significantly lower than the 4 GW of wind farm capacity that was auctioned during the same period last year, which is primarily due to delays and postponement in some of the key matured and developing markets as a result of the COVID-19 crisis. However, many key markets for wind turbines have continued their auctions as planned despite the crisis, which has been an important factor to secure the sustained growth of the industry.

In Europe, France held the fifth round of their wind auctions, which was oversubscribed. Italy, which aims to install 4.8 GW of wind power capacity up to 2021, awarded 406 MW (out of the auctioned 500 MW) in RE Auction Round 2. Germany executed two auctions out of which wind bids were not submitted under joint wind/solar auction due to restricting regulations, and Greece executed their second joint wind and solar auction resulting in their lowest ever average bid tariff. Ireland has released the provisional auction results for its Renewable Energy Electricity Support Scheme 1 (REES 1), which to date includes 479 MW out of 500 MW of successful onshore wind bids.

In Asia, during Q2 2020 India awarded a unique 400 MW Round-the-Clock auction to procure power from solar, wind, and hybrid projects to address renewable energy generation intermittency. After the amendments in the long delayed SECI T-IX ISTS, the result for the 2.5 GW wind blended with solar tender, which includes a80 per cent wind component was announced  in August. The tender was significantly under-subscribed, with only 970 MW awarded.

In China, no auctions were awarded during Q1 and Q2 2020. This is mainly due to two factors: firstly,  the deadline for submitting parity project applications was postponed to the end of April 2020 due to COVID-19 and the approval was not announced until August 2020; secondly, provinces that have reached their 2020 onshore and offshore wind targets included in their thirteenth Five-year Plan will not be allowed to auction new capacity and approve any new wind project in 2020.

In Latin America, auctions were much more impacted by the COVID-19 pandemic compared to other regions. Aside from Panama where the government announced it is working on a tender for renewable energy, which should be ready in December 2021, the remainder of the major markets in the region have either halted or postponed wind auctions. Brazil postponed all tenders scheduled for 2020, with Mexico and Colombia taking the decision to not issue a tender in 2020 due to a significant drop in energy demand during the COVID-19 crisis. Auctions are also on stand-by in Chile and Costa Rica due to changes in regulation, while in Argentina  auctions were suspended before COVID-19.

In the US, New York held plans to solicit their second round of offshore wind power bids for at least 1 GW in April 2020 and NYSERDA stated that the solicitation was not advisable during the COVID-19 crisis. However, in July the state relaunched the tender for 2.5 GW of offshore wind capacity, with a submission deadline in October 2020, and contracts due to be executed in Q4 2020.

Considering that the COVID-19 pandemic has created major disruptions on supply chains and the flow of workforce, impacting wind power development across the globe, action on the side of policymakers will be crucial to ensure that projects can meet their deadlines. This will require governments to not only adapt the auctions that are currently scheduled, but also to look ahead and extend project commission deadlines for auctions that have already taken place to provide security for the industry and create a healthy project pipeline.

Earlier this year, GWEC and leading wind industry corporates and associations released a joint statement calling on governments to put wind energy at the centre of their economic stimulus packages to support a Green Recovery from COVID-19. The statement highlights the vital role of the wind industry to drive growth and job creation and create thriving local economies.