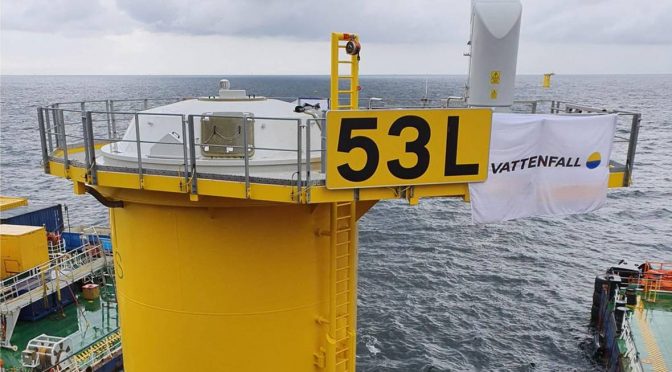 On Friday, the 72nd and final foundation of the Kriegers Flak offshore wind farm was successfully placed in the Baltic Sea.

Although working under special circumstances due to Covid19, the installation of the foundations, which started in May, were completed on schedule in a little over three months.

Once completed, Kriegers Flak will be Denmark’s largest offshore wind farm with a capacity to cover the annual electricity consumption of approximately 600,000 Danish households.

Next major step in the project will be the installation of cables and turbines. Cable installation and testing is scheduled to be completed in November this year, and the turbine installation is expected to start in early 2021. This puts the wind farm on schedule to be in full operation by the end of same year.

Kriegers Flak is the latest and largest of Vattenfall’s recent offshore projects in Denmark. The others being Horns Rev 3, which was inaugurated last year, and Vesterhav Syd & Nord, which are scheduled to be in full operation by the end of 2023, at latest.

With a production capacity of just over 600 MW, Kriegers Flak will be Denmark’s largest offshore wind farm.
The offshore wind farm’s production can cover the annual electricity consumption in 600,000 Danish households.
The 72 wind turbines have a total height of 188 metres and each monopile foundation weighs up to 800 tonnes.
The wind farm is located in the Baltic Sea, 15-40 kilometres off the Danish coast.