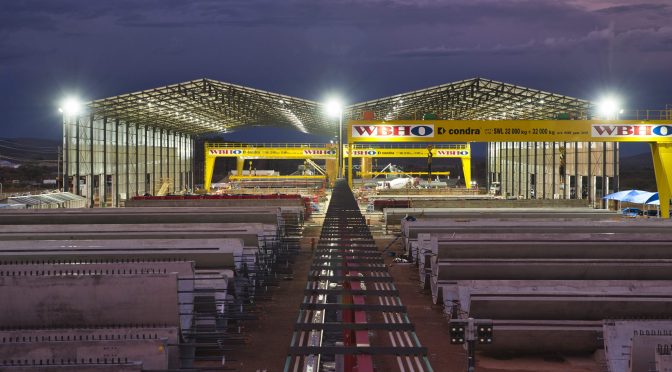 The factory will be ready in August and then the 300 people who will be the factory staff will be hired, but it is also expected to generate 200 jobs related to local component suppliers.
The Provincial Commission for Spatial Planning and Urban Development (CPOTU) of Cuenca has authorized this project from the German wind turbine manufacturer Nordex, participated by Acciona, which is going to build a factory for the production of concrete towers that serve as bases for wind turbines. It will be located in an area of ??12 hectares in Motilla del Palancar (Cuenca) and will generate 300 direct and 200 indirect jobs.

The Provincial Commission of Territorial Planning and Urbanism of Cuenca has approved the urban qualification for the ‘Minglanilla Generación’ substation project, which will be located in this town in Cuenca and which will serve to evacuate the energy generated by different wind farms located in the East of the province.

Like the eleven tower manufacturing plants established by the Nordex Group worldwide, the new factory is also based on a mobile concept and is always close to wind farms. With the factory in Motilla del Palancar in the future, the Group will supply Nordex wind farms under construction in the region, thus shortening routes and transport times and, therefore, reducing logistics costs. Every week, 20-meter long convex segments for two 120-meter towers can be manufactured on-site, to be assembled on-site at wind farms when wind turbines are installed.

The factory will be ready in August and then the 300 people who will be the factory staff will be hired, but it is also expected to generate 200 jobs related to local component suppliers, according to a company statement. of press.

“We are pleased to establish another industrial nucleus in Motilla del Palancar with our tower manufacturing facilities. This plant will also provide additional employment opportunities in Castilla-La Mancha as a business center. In total, several hundred people will be employed at the site. But the new factory will also give a significant boost to the upstream and downstream sectors. In addition to creating jobs, with our turbine technology we can efficiently ensure the success of our clients’ wind energy projects and make our contribution to a long-term and sustainable supply of clean energy, “explained José Luis Blanco about the project. , CEO of Grupo Nordex.
Other validated projects

Likewise, the Commission has given the green light to the construction of a 950-square-meter warehouse for the manufacture of precast concrete elements in Villanueva de la Jara; and to the specific modification of the subsidiary regulations of Tarancón for the reordering of an area of ??the municipality and whose land will go from a residential and industrial use to a global majority tertiary use, demanded in the municipality and responding to new business initiatives as well as the of the installation of a new food distribution chain.

In the same way, the approval of the Municipal Planning Plan of Quintanar del Rey for the adaptation to the urban layout of the town has been approved, with a procedure that has been carried out in just two months.