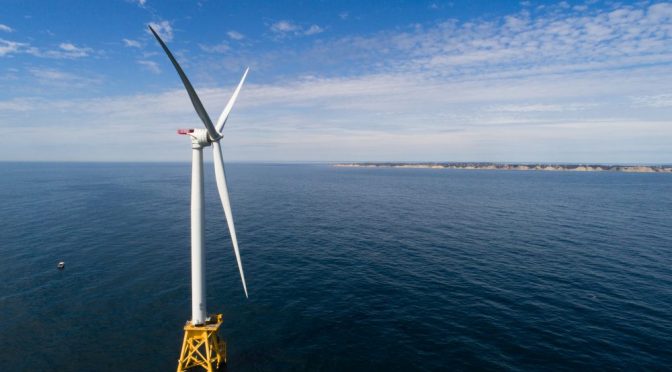 Laura Morton, AWEA’s Senior Director for Offshore Wind Policy and Regulatory Affairs, provided public testimony this afternoon on the Bureau of Ocean Energy Management’s (BOEM) draft supplemental environmental impact statement for the Vineyard Wind offshore wind project. The project would be the country’s first large-scale offshore wind farm. It would open the doors to a once-in-a-generation opportunity for job creation and coastal and port economic development as states up and down the East Coast harness their world-class offshore wind resources. Laura’s full comments follow below:

The United States is on the cusp of a rare generational opportunity— we have the chance to build an entirely new domestic industry in the form of offshore wind.

Doing so will contribute to tens of thousands of new jobs, revitalized ports, and expanded manufacturing, among other economic benefits. A March 2020 study published by AWEA and cited by BOEM in the draft SEIS finds that deploying up to 14,000 MW of offshore wind over the next five years will result in up to 45,000 jobs and up to $14.2 billion of annual economic output, with nearly double those numbers by 2030.

AWEA will be submitting detailed written comments on the DSEIS later this month.

In my comments today, I would like to highlight a few key aspects of the BOEM analysis.

First, BOEM appropriately acknowledges the many beneficial aspects of offshore wind, including economic and environmental benefits.

Second, AWEA concurs with BOEM finding little cause for concern for most of the areas it analyzed. BOEM comprehensively reviewed nearly two dozen potential areas of impact, including various species, tourism, sediment, lighting, and air traffic. For all but a few, BOEM found the impacts both from Vineyard Wind and the cumulative offshore wind build to be negligible, minor or, in a few cases, moderate. BOEM’s analysis in these areas was well reasoned and cited key scientific literature and other evidence.

As the DSEIS largely confirms, AWEA believes that advancing Vineyard Wind and other pending offshore wind projects is a good news story for our country.

With respect to potential impacts to commercial fishing, the offshore wind industry recognizes and embraces the importance of creating an ocean environment where we can co-exist with other ocean users, including commercial fishermen. Developers have held thousands of meetings with fishermen and organizations who represent them up and down the coast, as well as participating in joint working groups and task forces with commercial fishing representatives, including the Responsible Offshore Development Alliance’s Joint Industry Task Force and the Responsible Offshore Science Alliance. Developers have made changes to their projects, including changes that come at significant economic cost, to address concerns raised by the fishing community, and have striven to continue productive partnerships. The industry is firmly committed to continuing and expanding our partnerships with the fishing community as we work together to drive our country’s economy forward.

Contrary to some of the messaging around the DSEIS, it is important to recognize that BOEM only found “major” impacts on commercial fishing in the cumulative analysis, not with respect to Vineyard Wind. I would add that “major” does not mean unmanageable. Further, two of the most significant drivers for the “major” finding are actually beyond the control of offshore wind projects: (1) changes in distribution and availability of fish due to climate change, and (2) reduced stock levels due to fishing related mortality. As a carbon-free energy source, offshore wind is in fact part of the solution to the first of these drivers.

Finally, BOEM correctly acknowledges there are ways to lessen the impacts from offshore wind on this industry. With respect to safe navigation, for example, AWEA agrees with the BOEM finding when analyzing Alternative D2, which relied heavily on evidence and analysis from the U.S. Coast Guard, that 1 by 1 nautical mile spacing with a uniform east-west grid layout for turbines in the adjacent Massachusetts/Rhode Island lease areas reduces the potential impacts to commercial fishing, provides sufficient transit pathways through the wind farm, protects search and rescue capabilities, and protects safe vessel navigation.

By contrast, BOEM and the Coast Guard have identified significant concerns with the 2 nm or 4 nm transit lanes that are reflected in Alternative F. For example, the DSEIS raises concerns about the transit lanes impacting navigation safety through increased funneling of traffic, creating choke points, increasing vessel density, and increasing space-use conflicts. Because Alternative F is worse for vessel navigation and because it would significantly harm the economic prospects of the projects in this area, AWEA urges BOEM to reject Alternative F and adopt Alternative D2.

Thank you for the opportunity to speak.  AWEA looks forward to providing extensive written comments on the DSEIS later this month.