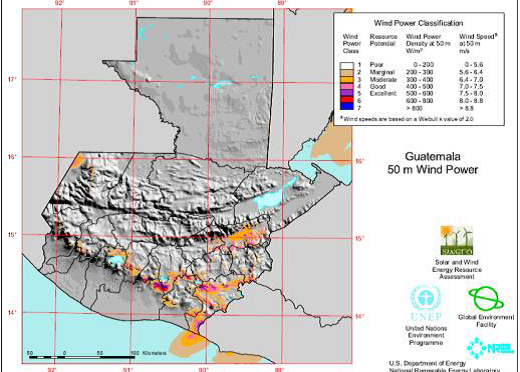 Wind power is one of the most important and growing renewable sources for generating electric power, but it’s not really a new technology. On some occasion we have heard of the story of Don Quixote fighting against the windmills that were used to grind cereals, fruits and seeds, or we have seen the postcards of the Netherlands with its tulip gardens and the towers that house the mills .
What is relatively new is its application in the electrical industry, which began with the invention of the electric generator in 1830. The first attempts to use the wind to produce electricity occurred in England and the United States around 1987-88.

Modern wind power plants had their main development in Denmark, with the invention of the horizontal axis wind turbine, which was built and started operating in 1987. The basic principle to produce electricity is the use of kinetic energy that creates the moving air.

The kinetic energy is transformed into electrical energy, first by the blow to the propellers of the turbine, which causes it to start spinning. The turbine in turn is connected to a generator that produces electricity, which is then connected to the electrical system for transportation and distribution.

Wind energy is one of the fastest growing renewable technologies in the world. This is mainly because installation costs have been reduced significantly in the last two decades, according to the International Renewable Energy Agency (IRENA). There are many places in the world with strong winds, but sometimes these places are far from demand. In fact, the best locations for wind turbines are offshore, although there are also onshore. In Guatemala there are two regions with winds capable of producing wind energy: the region of the departments of Escuintla and Guatemala, around the Pacaya volcano, and the eastern part of the department of Jutiapa, on the border with El Salvador, so it is not by chance this is where the wind power plants are installed. The first plant was “Eólico San Antonio El Sitio”, with an installed capacity of 52.8 MW, located in Villa Canales, department of Guatemala, which began operations in April 2015. The next is “Viento Blanco”, located in the municipality of San Vicente, Escuintla, around the Pacaya volcano, with an installed capacity of 23.1 MW, and has been operating since December 2015. The most recent is the “Las Cumbres” plant, which has a capacity of 31.5 MW, and is located in the municipality of Agua Blanca, Jutiapa. The total installed capacity as a whole is 106.5 MW, with energy production in 2019 of 330 GWh, representing 2.47% of the total generation in that year. Wind energy in Guatemala is an achievement of the policy of diversifying the energy matrix. The construction and installation of these plants was made possible by having been awarded contracts in long-term power purchase bids for end users, carried out by distributors and the National Electric Power Commission.