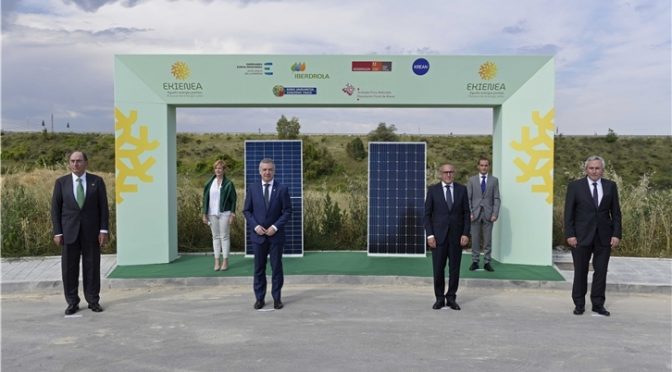 Iberdrola, the Mondragon Group, the Provincial Council of Alava and the Basque Government’s energy agency (EVE) have created a major Basque public-private partnership with the aim of building what will be the largest photovoltaic plant in the Basque Country: EKIENEA. The Basque electricity company has a 75 % stake; the EVE, backed by the Provincial Council, has 20%; and the cooperative group, through Krean, has 5 %.

The project, located on the Lacorzana estate in the municipality of Armiñón (Álava), was presented this morning to the president of the Basque Country, Iñigo Urkullu, by the chairman of Iberdrola, Ignacio Galán, the President of the Mondragon Corporation, Iñigo Ucín, the General Councillor of Álava, Ramiro González, and the Director General of the Basque Energy Agency, Iñigo Ansola. During the meeting, also attended by the Regional Minister for Economic Development and Infrastructures, Arantxa Tapia, the promoters of EKIENEA shared the details and dimensions of this new development.

With 100 megawatts (MW) of installed power and an investment of close to €70 million, this large renewable facility will generate clean energy to satisfy the annual consumption of more than 160,000 people – half the population of Alava – and will almost triple the current 60 MW solar generation capacity of the Basque Country. Its production will also avoid 25,000 tonnes of CO2 being released into the atmosphere each year.

Adjacent to the Lacorzana property is the Ekian solar plant, which was opened last January and has an installed capacity of 24 MW. The estimated production of the project presented today will be 3.5 times higher than that of this neighbouring facility.

EKIENEA will generate hundreds of jobs during its construction and in its operation and maintenance, proving that the transition to a low-carbon economy is also a source of prosperity and sustainable growth.

EKIENEA will extend over 200 hectares, half of which will be occupied by the photovoltaic plant and the other half destined for environmental compensation and the preservation of forest areas.

It is expected that the project will start in 2022 due to preliminary environmental observation processes and administrative procedures, and that it will be up and running after one year of construction, in 2023.

This new renewable energy installation will also become a great opportunity to showcase the technological solutions of the Basque companies that will be the driving force behind the project.