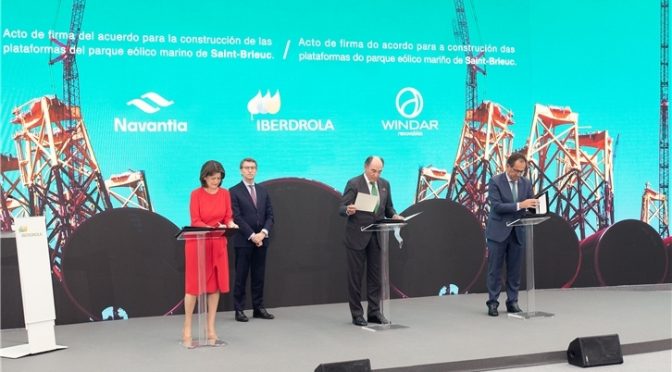 It comprises the construction and assembly of 62 ‘jackets’ and their corresponding piling for Saint-Brieuc offshore wind farm, being developed off the coast of Brittany in France which will supply clean energy to a million people.
The agreement will provide direct employment for 1,000 workers in Galicia and Asturias and for over 1,100 in France, where for the first time Navantia-Windar will open a factory to complete the works. The contract was signed this morning in Fene by the Chairman of Iberdrola, Ignacio Galán, the Chairman of Navantia, Susana de Sarriá, the Chairman of Windar, Orlando Alonso, in the presence of the Head of the Galician Government, Alberto Núñez Feijóo, and the Spanish Government representative in Galicia, Javier Losada.

Iberdrola, through its subsidiary Ailes Marines, has awarded the Navantia-Windar UTE (temporary business consortium) the construction of 62 jackets – the structures that support offshore wind turbines – and the necessary piling for the Saint-Brieuc offshore wind farm which the energy company is developing off the coast of Brittany.

The contract, worth €350m, is the largest offshore wind contract for Navantia-Windar to date and was signed this morning in Navantia’s shipyard at Fene (A Coruña) by Iberdrola Chairman, Ignacio Galán, the Chairman of Navantia, Susana de Sarriá and the Chairman of Windar, Orlando Alonso, in the presence of the Head of the Galician Government, Alberto Núñez Feijóo, and the Spanish Government representative in Galicia, Javier Losada.

Specifically, the agreement signed comprises the fabrication of the jackets by Navantia at its Fene facilities and the piling by Windar at its Avilés site. The final assembly of all component parts will be completed at the Galician shipyard facilities.

This award cements the relationship between Iberdrola and Navantia-Windar which spanning over six years totals contracts worth nearly €1bn, including the already completed jobs for the Wikinger wind farm, in German waters of the Baltic Sea, and East Anglia One, in the North Sea.

As the Chairman of Iberdrola highlighted in his speech, this move reaffirms the ability of Navantia-Windar to make the most of the opportunities offered by a very promising market such as offshore wind, where Iberdrola is moving forward to global leadership.

During his speech, Ignacio Galán pointed out that with this contract, in addition to fostering a clean energy source like offshore wind power, “we are showing that the green economy is a major source of industrialisation and sustainable, quality jobs, now that revitalizing the activity is more important than ever.

“It confirms Europe as a great common project for the benefit of all. A Europe united and strong, where companies can make very relevant contributions to infrastructures like Saint-Brieuc offshore wind farm,” Galán added.

For her part, the Chairman of Navantia, Susana de Sarriá, highlighted the many challenges of this very dynamic sector, which continues to grow and open up new perspectives, and in which Navantia and Windar hope to continue accompanying Iberdrola by offering the best service and promoting industrialisation in the areas where we are established.

The contract signed today between Iberdrola and Navantia-Windar will help create 2,000 direct jobs.

Of these, almost 1,000 are jobs in Galicia and Asturias, and over 1,100 are distributed among several companies in France, specifically, new fabrication facilities around the ports of Brest, Le Havre and the future marshalling port which is still to be announced. A new feature of this contract is that Navantia-Windar is to open a plant in Brest, to make the stabbings, lower joints and truss structures for 34 of the 62 jackets.

Over and above these 2,000 direct jobs, several thousand more will be created by local contractors, both in Spain and France.

This contract has a marked European character, combining the experience and know-how of Spanish and French skilled professionals while endorsing the path to green recovery and sustainable growth marked out by the European Union.

Saint-Brieuc offshore wind farm will have 496 MW capacity, and will generate enough clean energy to meet the electricity needs of nearly one million people. Located off the coast of Brittany in an area covering nearly 78 km2, the facility is due to go onstream in 2023.

To achieve this, Iberdrola will invest €2.4bn. This new facility reaffirms Iberdrola’s commitment to the French market, where it expects to invest up to €4bn over the next four years.