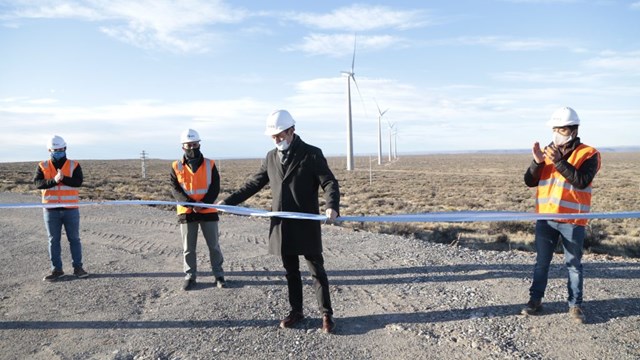 Governor Omar Gutiérrez led the start-up of Vientos Neuquinos, the province’s first wind farm, this morning. It is located in Bajada Colorada, 40 kilometers from Picún Leufú in the direction of Piedra del Águila.
Communal authorities from both towns and representatives of the company that carried out the work also participated in the act.

Today the first ten wind turbines were put into operation, out of a total of 29 that the wind farm will have. Vientos Neuquinos S.A. It has the recognition of Wholesale Market Agent, with the approval of the environmental authority of the Province and with the Certificate of Public Convenience and Necessity issued by the National Electricity Regulatory Entity (ENRE).

Today, the project provides the energy generated by the Patagonian wind to the national interconnected system. It also has dispatch priority granted by the National MATER Program and its incorporation into the electricity market was made by contract with private consumers.

For Governor Omar Gutiérrez, This work will allow us to expand the province’s energy and economic matrix, generating social development.