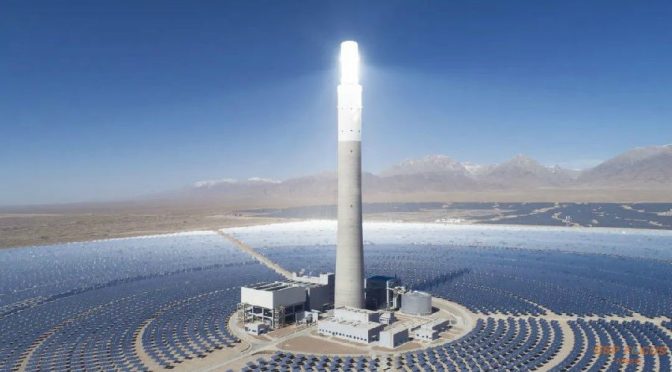 According to the operation record, the solar thermal plant has run 27 days in this month and stopped generation for 2 days due to heavy clouds. The total DNI was 175.71kWh/m2. Based on the performance model, the theoretical generation is 12.9730GWh and the actual generation reached 13.0134GWh, achieving 100.31% of the expected generation. The increasing clouds in March led to a slight drop of fulfillment rate compared to that of February (100.31% VS 102.9%). Due to complicated weather condition on March 20th, the operation team decided to maintain the outbound transmission line instead of running the plant. Based on the performance model, the DNI in that day was 2.76 kWh/?, and an estimated 0.15GWh power generation was abandoned.

The plant started running for performance test since late September in 2019. Up to now, the plant has been running stably for half a year, and the major indicators of the plant has exceeded corresponding design parameters.

The plant has run 158 days in the past 182-day performance test period (the rest 24 days were too cloudy to keep running) without shutdown due to equipment failure. In particular? there were 76 days exceeding 100% fulfilment rate on daily basis.

The total DNI of the past half year was 1055.69kWh/m2 and the converted electricity was 74.87GWh (67.09GWh has been delivered to the grid) with an average fulfilment rate of 97.06%. The first quarter of 2020 witnessed extraordinary accomplishments of the plant with consecutive fulfilment rate over 100%, which was the top performance among its peers.

It is widely accepted that tower CSP plants need 3-5 years(“learning phase”) to meet designed power generation due to its complexity in terms of technology itself, and complicated process?highly difficult operation method. Typical EPC contract of tower CSP project accepts 70-80% fulfilment rate for the 1st year after completion. According to the released operation data, up to now, no other player has accomplished the said target. The expeditious improvement of Delingha 50MW project is a remarkable manifestation of leading technology?equipment, engineering, operation of Chinese CSP players.

For the upcoming six months, the operation optimization will be focused on to enhance system efficiency and fulfillment rate. SUPCON SOLAR strives to reach or exceed 100% of the designed annual electricity generation by the end of September this year (the first year of performance test).