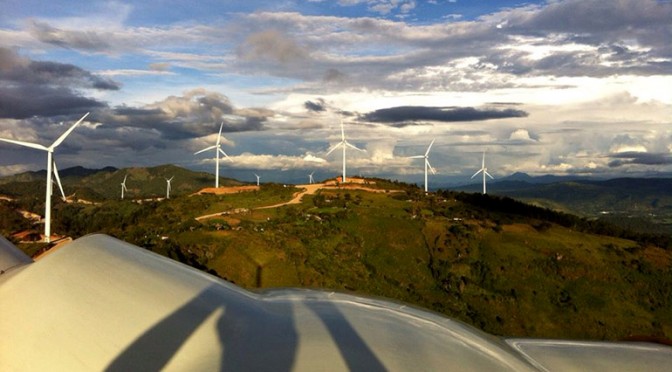 The Cerro de Hula wind farm is one of the wind energy projects that contributes to the production of electricity nationwide (126MW) and that directly benefits Tegucigalpa and the communities of Santa Ana and San Buenaventura.

Energy is one of the main assets in the economy of every country as it is a resource that drives the work and productivity of any industry, contributing to the economic growth and sustainable development of societies.

The Multi-Investment Corporation (CMI) since its operations began in 2011, the plant has contributed to the social development of local people and the economic activation of the sector with the formation of new businesses for the benefit of communities, such is the case of food sales, fuel distribution, rentals and transportation, as well as the creation of more than 600 direct jobs

“One of the principles of development states that if the environment does not grow in the hands of the project, then the objective of promoting sustainable social development is not being met. The activity and development of operations at the Cerro de Hula wind plant has not only contributed to the diversification of the Honduran energy matrix through the generation of clean energy, but also promotes eco-social programs to contribute to the Objectives of Sustainable Development of the United Nations SDG and thus promote an improvement in the quality of life in people, ”says Karla Martínez, Manager of Regulatory and Institutional Affairs at CMI.

Cerro de Hula has 63 strategically placed wind turbines based on studies that determine how to best take advantage of wind reception and is the one with the greatest installed capacity to supply, according to weather conditions, up to 126MW of power, which benefits Approximately 120 thousand homes and positions it at the same time, as the largest wind farm in Central America.

Cerro de Hula stabilizes the distribution of electricity and improves its quality, ending the possibility of blackouts originating in the surrounding communities.