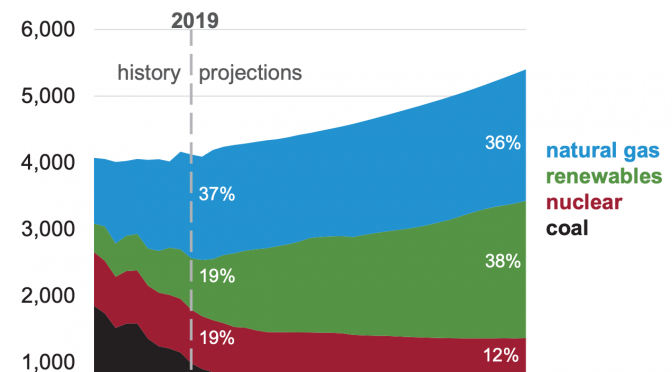 The US Energy Information Administration (EIA) recently released its Annual Energy Outlook 2020 report. Unlike Lazard’s annual present to empirically oriented observers of the global energy transformation, the EIA’s reports typically are head-scratchers, and this one is no different.

That’s right, in the age of global warming, when the UN IPCC 1.5 degree reports make it clear that we have to cut our greenhouse gas emissions by 55% or so by 2030, the EIA thinks that that United States will still be getting 13% of demand from coal and 38% from natural gas.

There’s a lot to say about this, but let’s start with breaking down age and expected retirement date of generation assets, something which will make blindingly clear why this makes no sense even on the surface. Let’s play this forward. 2050 is 30 years from today.

That’s the 2018 EIA chart. Let’s pick apart some of the numbers.

At 13,703 MW, 2019 marks the highest level of annual coal capacity retirements in the U.S. since 2015, a new S&P Global Market Intelligence analysis of federal data shows. The amount of coal capacity planned for retirement in 2020 is expected to exceed the amount retired in each of 2014, 2016 and 2017.

The federal government counts four new coal projects on a list of planned power plants nationwide. Three of those face long odds, and none will be able to replace the millions of tons in lost coal demand resulting from recent retirements, even as the Trump administration has vowed to revive the ailing industry.

Will the U.S. Ever Build Another Big Coal Plant?

About 74% of all coal-fired power plants are at least 30 years old, and the average life of such plants is just 40 years, according to the National Association of Regulatory Utility Commissioners.

Dry Fork Station near Gillette, which opened in 2011 and may prove to be the last coal plant ever built in the West.

Coal plants are closing across the West. Here are the companies sticking with coal

Okay. What does all this tell us? That coal plants will almost all entirely be retired by 2050. That no new ones are going to be built to replace them. How exactly is 99% retirement of coal generation in the next 30 years going to result in 10% of demand from coal generation? The story of the past five years is the story of the impending death of coal globally and in the US, not the story of its renaissance. That’s why there are so many coal bankruptcies.

The EIA is head-scratchingly wrong in this prediction and it’s unclear why. I assume lobbying in this case, or coal-oriented idiots in the analysis group who refuse to let go and retire gracefully.

The Department has recently published a reported by PB Power on the average expected technical lifetime, the number of years a plant might be expected to be able to operate, for a range of non-renewable plant. For Combined Cycle Gas Turbine (CCGT) plant this was estimated to be 30 years. The full report can be found on DECC‘s website at:

Note that the youngest gas plants in the S&P fleet information are expected to have aged out and been retired by roughly 2036. And gas plants don’t hang around long after their retirement, taking up a desk in the office and bending the ear of anyone who will listen. In fact, the opposite is true. At least one class of gas plant tends to retire early and go lie on a beach somewhere.

So while the gas fleet is younger, it’s going to retire at an earlier age than the coal fleet.

This is another EIA chart, and guess what. Gas isn’t in a growth mode, it’s flat. That was after years of growth. It’s just following the coal curve, but is behind it.

There will be more gas on the grid in 2050 than coal, but over 30%? Deeply unlikely. All of the Democratic candidates for President are committed to the Green New Deal, which calls for a 55% reduction in US GHG emissions by 2030. Guess what causes a lot of the GHG emissions? Gas generation.

The front-runner as of this writing, Bernie Sanders, is calling for a moratorium on all new fossil fuel development in federal lands and waters and an early termination of leases, as well as a crash deployment of wind and solar. That’s in line with global sentiment and global scientific requirements for change in global emissions.

Natural gas remaining above 30% in the US in 30 years is deeply unlikely. It’s possible, but only in a very badly warming world with a country that has been led by the Trumpian Republicans into a weird alternative universe. Even the Republicans are making a lot of noise indicating that they are going to start accepting the reality of climate change soon, so it’s not like even under Trump they are going to continue to be the sole major global party with an official policy of science denial.

Republicans will lose #Election2020 if they don’t accept climate change

The average age of the US nuclear fleet per S&P Global Market Intelligence is 37 years. Only one reactor has been commissioned in the past decade, Watts Bar II, and at that only after being mothballed 60% of the way through construction in 1985. Before that we have to go back to the early 1990s for nuclear starts.

Nuclear has a typical 40-year lifespan but has been shutting down prematurely as well. Some of that is new discovery of previously unknown fault lines running under nuclear plants, but a lot of it is just that it’s too expensive and can’t compete with natural gas, wind, and solar. Ohio had to extend over a billion dollars in new subsidies to keep its nuclear alive last year, as it can’t compete on the open market, being the favorite of the free market crowd as it is. Oh, wait.

There are only two nuclear plants in construction in the US right now, after receiving a massive set of new funding due to huge cost and schedule overruns. Even if they make it to commissioning, and all of the nuclear plants last until 40 years of age, that only leaves three reactors that aren’t past their retirement date by 2050. Let’s assume that the three reactors last that long. That’s three of currently 99 nuclear reactors. That’s 3%.

How exactly is nuclear going to be providing 10% of all demand, half of what it currently provides, with only 3% of its current capacity? Someone at the EIA is deeply confused about nuclear reality. I assume that they are as comparatively geriatric as the nuclear fleet.

Let’s go back to this chart, shall we? What’s the portion of supply which is actually growing?

Oh, that’s that ‘renewables’ category, which excludes hydropower, but shouldn’t. No idea why the EIA excludes hydroelectric from the renewable category, but what the heck.

What’s the single biggest factor determining what form of new and replacement generation gets built? If you answered cost, give yourself a gold star.

The only form of generation which is growing in the United States is wind and solar. And as the Lazard chart shows, that’s because it’s incredibly cheap compared to everything else, include gas. Only some gas combined cycle plants overlap with some onshore wind farms, which is why they are still being built.

But gas prices aren’t going down. And gas generation isn’t magically eliminating GHG emissions. And carbon pricing, like winter, is coming. Meanwhile, wind and solar are projected to continue to drop in price to averages of about $20 per MWh by 2030.

No. It’s going to be wind and solar.

There is no world where empirical reality is still considered something even as important as fingernail cuttings where the EIA projections cited in the question are remotely possible.

It’s unclear why the EIA 2050 projections are so skewed from observable realities of costs, age of fleets, and global industry transformation. Like most major energy analysis organizations, they are very poor at predicting the rapidly declining costs of wind and solar, very poor at predicting the rapidity of growth of those technologies and very poor at understanding that the existing technologies are fairly radically outcompeted. But you think that they would have figured out after a decade of publicly being humiliatingly wrong in their projections that they needed to change their methodologies. One assumes that there’s a mixture of lobbying, conservative thinking, cognitive bias, and generally bad prediction methods. And at that, they are not as terrible as some others.