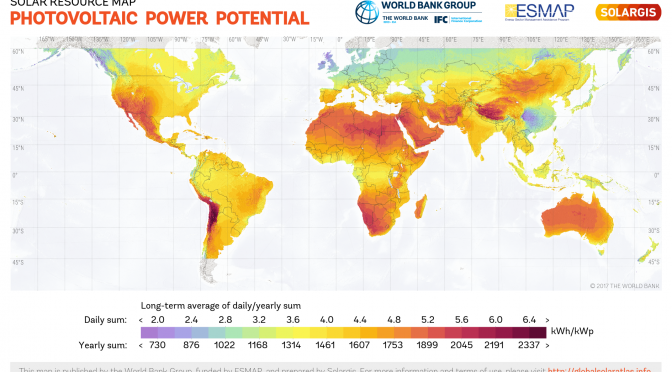 After hydro and wind energy, PV is the third renewable energy source in terms of global capacity. The International Energy Agency expects a growth by 700 – 880 GW from 2019 to 2024. According to the forecast, PV could become the technology with the largest installed capacity by the mid 2020s.

This solar resource map provides a summary of the estimated solar energy available for power generation and other energy applications. It represents the average daily/yearly sum of electricity production from a 1 kW-peak grid-connected solar PV power plant covering the period from 1994/1999/2007 (depending on the geographical region) to 2015. The underlying solar resource database is calculated by the Solargis model from atmospheric and satellite data with 15-minute and 30-minute time step respectively, and a spatial resolution of 1 km. Further details available from: https://globalsolaratlas.info.

Photovoltaic power potential map estimates, how many kWh of electricity can be produced from a 1 kWp free-standing c-Si modules, optimally inclined towards the Equator. The resulting long-term average (daily or yearly) is calculated based on the time-series weather data of at least recent 10 years. The map is published by the World Bank and provided by Solargis.

Photovoltaics (PV) is the conversion of light into electricity using semiconducting materials that exhibit the photovoltaic effect, a phenomenon studied in physics, photochemistry, and electrochemistry.

PV has become the cheapest source of electrical power in regions with a high potential, with price bids as low as 0.01567 US$/kWh in 2020. Panel prices have dropped by the factor of 10 within a decade. This competitiveness opens the path to a global transition to sustainable energy which would be required help to mitigate global warming. The situation is urgent: The emissions budget for CO2 to meet the 1.5 degree target would be used up in 2028 if emissions remain on the current level. However, the use of PV as a main source requires energy storage systems or global distribution by High-voltage direct current power lines causing additional costs.

A photovoltaic system employs solar modules, each comprising a number of solar cells, which generate electrical power. PV installations may be ground-mounted, rooftop mounted, wall mounted or floating. The mount may be fixed or use a solar tracker to follow the sun across the sky.

Solar PV has specific advantages as an energy source: once installed, its operation generates no pollution and no greenhouse gas emissions, it shows simple scalability in respect of power needs and silicon has large availability in the Earth’s crust.

Photovoltaic systems have long been used in specialized applications as stand-alone installations and grid-connected PV systems have been in use since the 1990s.
Photovoltaic modules were first mass-produced in 2000, when German environmentalists and the Eurosolar organization got government funding for a ten thousand roof program.

Advances in technology and increased manufacturing scale have in any case reduced the cost, increased the reliability, and increased the efficiency of photovoltaic installations.
Net metering and financial incentives, such as preferential feed-in tariffs for solar-generated electricity, have supported solar PV installations in many countries. More than 100 countries now use solar PV.

With current technology, photovoltaics recoups the energy needed to manufacture them in 1.5 years in Southern Europe and 2.5 years in Northern Europe.