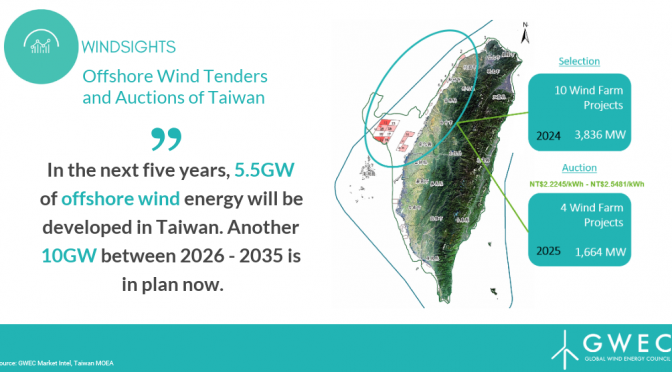 Within a short period of time, Taiwan has emerged as a leading offshore wind power market in East Asia due to its ideal conditions for wind energy and the government’s commitment to developing the industry.

In January 2018, the offshore wind energy target was increased to 5.5GW by 2025, and Taiwan continues to ride the wave of its offshore success by increasing their commitment yet again to add a further 10GW of offshore wind turbines capacity off the Asian island between 2026 and 2035.

What the Taiwanese government has done in such a short period of time sets a good example for other Asian countries and global peers alike. This article will take you through the several key steps that defined the success of Taiwan’s offshore policy, which its Asian neighbours can learn from if they want to replicate the success in their own markets.

A critical initiative of Taiwan’s offshore success was the feed-in tariff scheme offered by the government in the initial phase, a 20-year ladder FiT scheme of 5.850 NTD (US$0.18) per MWh to back 3.8GW of capacity, creating scale of development to make cost reductions possible for future phases. Looking towards the more mature offshore market, regulators and governments reviewed the support scheme set-up to capture achieved cost reduction potential and increased competitiveness of offshore wind through competitive bidding process in the next phase.

Taiwan’s government has demonstrated a great example of how to build an offshore market right by creating the volume, which is the basis for cost reduction in the long run. One of the key misunderstandings in emerging offshore markets is that they take the super low cost figure from other mature markets as granted. However, the cost reduction needs to be achieved by the volume built up in its own market rather than just transferred from the other, more mature market. Volume in the initial phase is key in building up the infrastructure, supply chain, project finance cases and experiences as well as the localised workforce, all which are crucial for supporting further long-term growth of the industry.

Zoning for offshore wind successfully through a three-stage development plan

While the method of zoning is not a new concept solely developed by Taiwan, the government of Taiwan has executed it very well. The Taiwanese government has surely studied and precisely zoned out regions that are very clear for reference of developers to submit their bid. The zoning process helped to secure the projects viability and also provide huge cost savings in the process for developers. This is because the zoning process reduced project risks for clashing with other ocean development and military purposes while also providing a scale effect for project development.

Overcoming the Feed-in Tariff slash by engaging with the industry

The development of Taiwan’s offshore wind sector is not without its hiccups, and the challenges it encountered in its development is also something worth sharing. The promising offshore wind market in Taiwan was very close to becoming stunted in the end of 2018, when the government planned to cut the Feed-in Tariff level by 12.7%, from 5.8498NT$/kWh to 5.106NT$/kWh.

Forming a strong industry alliance to address this challenge led to a meeting between GWEC and the Taiwanese government to discuss the proposed changes to highlight how such a dramatic reduction in the tariff, combined with the two new restrictions, would stall the offshore wind market. After months of intensive work, GWEC welcomed the subsequent MOEA announcement on 30 January 2019 that the new tariff would be a 5.71% cut to 5.5160NT$/kWh, a stepped load hours cap, and the reintroduction of a revised ladder tariff with a lower rate for the first 10 years and an increased rate for the second 10 years.

This experience offers a stark reminder of the vulnerability of the emerging industry, as well as the the key point we stressed previously in this article: a stable and generous FiT in the first phase is crucial for the development to benefit the industry in the long run.

In Taiwan, the FiT challenge was a result of a combination of lack of public awareness of the offshore wind industry, thinking that the FiT is not needed at such a high-level given it can deliver a much competitive level in the auction, and the party politics in Taiwan, given that offshore industry is cherished by the incumbent government. Not every country will experience the same political situation, but other policymakers should still learn the key takeaway: FiT stability is the key in the initial phase.

It also shows that the industry needs a strong coalition and effective industry association in the early days when the sector is being built.

Opening up the Taiwanese market to corporate PPAs could be one way to mitigate the effects of the FiT reduction. In January 2017, Taiwan’s Electricity Act was amended to allow for the liberalisation of Taiwan’s electricity market that supported renewables. The new law opened the country’s renewable energy sector to private renewable energy participation and made it possible for non-utility buyers to procure Taiwan-Renewable Energy Credit (T-RECs) directly from projects or via newly enabled renewable energy retailers.

Due to Taiwan’s strict verification mechanism to ensure the credibility of T-RECs and a market platform to match buyers to sellers, in January 2019 Google announced that it had entered into its first PPA in Asia with a 10 MW PPA deal for a solar project near Tainan City. While the Corporate PPA market in Taiwan is still new, the execution of a Corporate PPA by Google is evidence that a market can exist.

Looking into the future of Taiwan’s offshore industry

During 2019, the Taiwanese government reaffirmed its commitment to the offshore wind industry with its economically viable tariff and exemplary planning through proper zoning and legal frameworks for bidding, thereby, creating the necessary certainty for investors to support offshore wind development in Taiwan.

During the inauguration of Formosa 1, an important milestone for offshore wind in Taiwan, President Tsai announced that Taiwan will commit to add a further 10 GW of offshore wind capacity between 2026 to 2035. Taiwan has a strong vision and drive to become the green energy development centre of Asia by taking the lead in offshore wind and making concrete plans for the future of the industry. Now, the Ministry of Economic Affairs (MOEA) is formulating the Zonal Development policy of offshore wind for the next 10-year stage from 2026 to 2035, aiming to install 1 GW per year. The full potential for corporate PPAs to support market growth is still unclear right now, however, it is clearly an important driver.

With an emerging local supply chain, a strong alliance with local turbine assembly from leading global OEMs, and steadfast backing of international equity and debt finance providers, Taiwan is on the right track to achieve their vision of becoming the regional hub supply offshore turbines and balance of plant (BOP) for the next emerging offshore markets in the Asia.