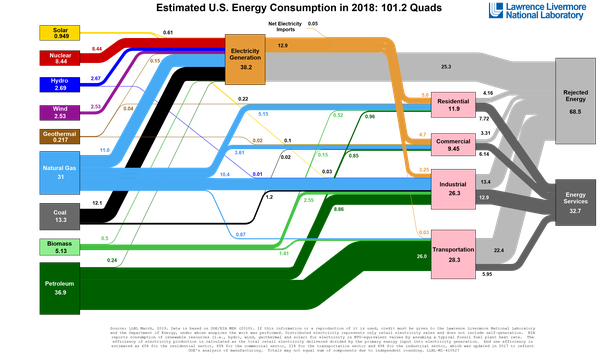 How many wind turbines would it take to power the US? originally appeared on Quora: the place to gain and share knowledge, empowering people to learn from others and better understand the world.

So this is a hypothetical scenario. Obviously wind energy wouldn’t be the only form of primary energy in the USA. Solar, hydro, geothermal and biofuels will also play roles, with solar being at least equal to wind generation.

But let’s make some assumptions.

How much primary energy does the USA require, is the first question.

This energy flow chart from the Lawrence Livermore National Laboratory is crucial to understanding this. A lot of people have a very mistaken idea of how much energy we have to replace. They count up all the boxes on the left and come up with a huge number. But the actual number is closer to the small box on the right. The large grey box above that is rejected energy, mostly in the form of waste heat from burning fossil fuels.

And electricity generated by wind energy is incredibly more efficient at being generated and at being used than fossil fuels. Of course, electricity isn’t 100% efficient either. We should take some losses for transmission, battery storage losses for EVs, waste heat from LEDs (much less than incandescents and fluorescents but still) and the like. When it’s used as heat, it turns into heat very efficiently, so that’s a wash.

Of course, we don’t measure electrical generation in exajoules, but in terawatt hours (TWh). There are about 278 TWh in an exajoule. That means we need to generate 11,500 TWh from wind farms in a year.

The average wind turbine installed in the USA in 2018 was 2.6 megawatts (MW) in capacity. If we were just going to install that scale of wind turbine, that means we would need about 1.26 million of them.

That’s a lot, of course. The USA consumes a great deal of energy every year.

This is all hypothetical, of course. We’ll end up with a continent-scale grid with lots of HVDC, a bunch of excess wind and solar because they are so cheap to build, and then a bunch of gap fillers. Mark Z. Jacobson and his Stanford team have the numbers for each state (and 139 countries globally) in the USA in their 100% renewables by 2050 material.