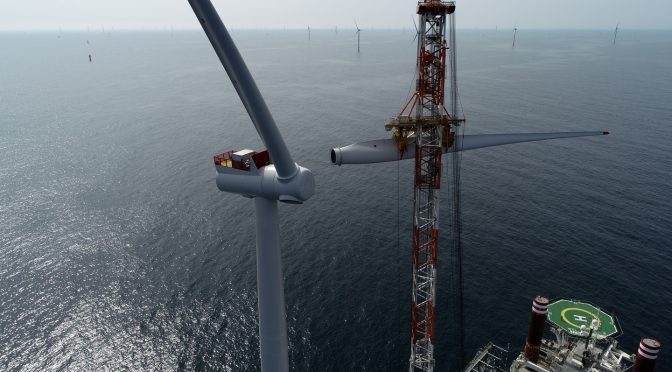 In the wake of New Jersey Governor Phil Murphy’s announcement this past week of his Executive Order directing the increase of the state’s offshore wind procurement to 7,500 megawatts (“MWs”) by 2035, which amounts to more than half of the state’s total load, the New York and New Jersey regions have solidified their national pole position with respect to the future of United States offshore wind development. At a total of nearly 17 gigawatts (GWs) of total capacity slated by the two states by 2035 – more than 50% of the U.S. commitments – the gravitational pull for port infrastructure, supply chain and other development investment decisions will be even greater.

Two contracts recently executed by New York – for a total of nearly 1700 MWs – show the promise of the industry and provide an indication of the economic activity and infrastructure development to come. And those contracts were the result of multiple years of planning emanating from several sources:

This first alert provides a detailed look at New York’s first two major projects, setting the stage regarding their timeframes and regional impacts, and likely 2020 development and regulatory actions. Future alerts will dig deeper into the various New York State issues facing the industry and its supply chain, including labor and employment issues, permitting, contracting and utility and regulatory matters.

The Equinor Wind US LLC and Sunrise Wind LLC projects will deliver 816 and 880 megawatts, respectively.

Equinor’s project, known as Empire Wind, will be in the New York Bight, located in a wedge-shaped Wind Energy Area (WEA) leased by the U.S. Department of Interior’s Bureau of Ocean Energy Management (BOEM). The closest turbine will be located approximately 15 miles south of Jones Beach. The Sunrise Wind Project is a joint venture between Ørsted and Eversource and will be located 30 miles off the tip of Long Island in a WEA south of Martha’s Vineyard. Equinor’s project is expected to be operational by 2022. It is anticipated that the Sunrise Wind project will be operational in 2024. Click here to view the geographic location of the projects.

At the end of October, NYSERDA filed a report with the State’s Department of Public Service regarding Phase 1 of the State’s offshore wind procurement industry. NYSERDA’s report contains information regarding various metrics, price information and project details; competition among developers; the projected costs and benefits of the awarded projects; use of the Index OREC (offshore wind renewable energy certificates that are priced to an index of wholesale market prices in Zones J and K of the NYISO) contracting structure; developers’ mitigation plans to address issues raised by environmental and fishing communities; negative health impacts that are avoided by the use of offshore wind energy and the economic impact that the contracts are expected to generate for the state. Headlines of the executed contracts for the Empire Wind and Sunrise Wind projects include:

In addition, NYSERDA has stated that the projects will result in $700 million in health-related savings (cleaner air means few doctor visits) and $3.2 billion in port and infrastructure-related investments.

In the near term, developers are working with partners to respond to the State’s Offshore Wind Port Infrastructure Request for Qualifications (RFQ). Submissions pursuant to that RFQ were due November 15, 2019. This RFQ is in response to Governor Cuomo’s call earlier this year for New York State to invest up to $200 million in New York port infrastructure to leverage and strengthen private investment and maximize the long-term economic benefits to the State, which represents the nation’s largest infrastructure commitment to offshore wind, and will be a critical ingredient in realizing the potential long-term economic benefits to the State from the regional development of offshore wind.

B. New York’s Next Round of Offshore Wind Procurements

Stakeholders are also eagerly awaiting NYSERDA’s next solicitation for ORECs from projects that will sell their electricity into the New York Control Area. NYSERDA is expected to file a white paper or petition with the Department of Public Service (DPS) by the first quarter of 2020, which would propose the details of that second procurement. After that, the DPS will kick off a notice and comment rulemaking process before the PSC. The PSC is then expected to issue an Order in the second half of 2020 authorizing the next tranche of the State’s offshore wind procurement, which could be for a capacity anywhere between 2,400 MW and 9,000 MW (the nameplate capacity mandated to be procured by the State’s recently passed Climate Leadership and Community Protection Act). However, one might expect the next procurement to be for at least another 2,400 MW (for a total of 4,800 MW to date).

Questions regarding transmission infrastructure and other matters may limit the Commission’s ability or willingness to authorize the entire remainder of the 9,000 MWs. Moreover, questions remain with respect to whether BOEM will have issued additional WEAs in the New York Bight from which projects might propose for that next solicitation, bolstering bidder competition, and whether the federal government will have enacted an offshore wind investment tax credit that could be monetized by projects that commence construction after December 31, 2020. More WEAs and a tax credit could be expected to put even more downward pressure on prices bid into New York’s next solicitation.

Outside of New York, offshore wind development continues along the East Coast:

While offshore wind development picks up among the states, a question looms about support for the industry at the federal level. In August, the Trump administration cast the fate of the nation’s first major offshore wind farm into doubt by extending an environmental review for the $2.8 billion Vineyard Wind project off Massachusetts. In an interview with Bloomberg, Interior Secretary David Bernhardt reported that the Interior Department ordered BOEM to carry out an additional study of the farm as well as the “cumulative impacts analysis” of other wind power plants along the East Coast. In the interview, Secretary Bernhardt did not explain the scope of these reviews or provide a clear schedule or series of next steps. Vineyard Wind’s developers, Avangrid Renewables (a subsidiary of a Spanish energy company) and Copenhagen Infrastructure Partners (a Danish investment firm), were racing to commence construction before the end of the year so that the project might qualify for the 12% investment tax credit (ITC). Vineyard Wind’s developers state that they nevertheless remain committed to the project.

In addition, the scope of BOEM’s cumulative impacts analysis remains uncertain. In particular, it is unclear whether BOEM’s cumulative analysis will include the WEAs off the New York Bight – in addition to those off New England, where Vineyard Wind is located – or even WEAs farther south. BOEM is expected to make this determination in the coming months. However, even if this is in fact the case, the path forward for the issuance of an auction notice for new WEAs in the New York Bight (a process that began when NYSERDA submitted the proposed “Areas for Consideration” in October, 2017) is still very much unclear.

For now, states continue to push the envelope while decisions at the federal level have yet to unfold. Indeed, here in New York, in 2020 we will likely see hundreds of millions committed to port infrastructure, construction and operation plans for the state’s first two major projects, a proceeding to authorize Phase 2 of the state’s program and issuance of yet another solicitation for even more ORECs.