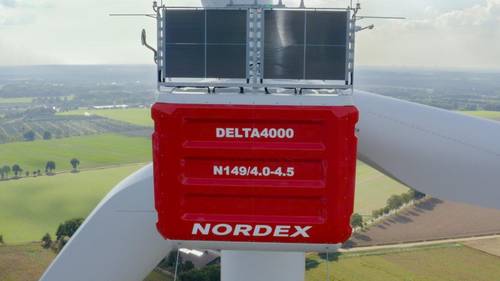 These are the Chubut Norte III and IV wind farms, whose construction had been interrupted in October due to foreign exchange restrictions that stopped the disbursement of foreign credits.
The resumption of the works is due to the understanding of multiple actors. The work stoppage had resulted in the suspension of some 900 workers affiliated with UOCRA.

The wind turbine manufacturer Nordex and the shareholders of the Chubut Norte III and IV wind farms reached an agreement to resume works that were suspended since mid-October.

The management carried out by the entire wind industry in order to adapt the exchange regulations to allow the financing scheme called “project finance”, allowed that, with the goodwill and the understanding of authorities at national and provincial level and the International banks involved in financing, cooperation of contractors and workers of UOCRA, an agreement could be reached to continue the project. The agreement concluded at the Ministry of Labor foresees a progressive plan for the restart of works, in a schedule proposed by the responsible contractors, whose objective is to start the operation during 2020.

The Chubut Norte III and IV parks were awarded in round 2 of the RenovAr Program. As a whole, they will have 32 Nordex technology wind turbines, which will allow an annual production of electricity exceeding 650 thousand MWh, which will supply the equivalent to the consumption of 220 thousand homes and prevent the emanation of 328 thousand tons of CO2 per year. the atmosphere.

For the aforementioned wind projects, a financing agreement (Project Finance) for $ 131.5 million was signed last July for its construction and commissioning. The agreement consisted of a secured loan without recourse to 15 years granted by the German Development Bank (Kreditanstalt für Wiederaufbau – KfW). The KfW loan was guaranteed by the German Export Credit Agency, Euler Hermes, through a comprehensive trade and political credit agreement for export.

Investments for renewable energy projects were mostly achieved through international financing provided by multilateral banks, development banks and European and American export credit agencies (ECAs). These institutions are willing to maintain financing conditions, supporting the country even in times of great volatility and financing the country when it does not have access to markets. Therefore, it is key that the conditions of the agreements can be maintained in the medium and long term. In the coming years, the Argentine industry will have to meet increasingly demanding environmental standards to ensure its entry into the main markets of the world, so that the generation and consumption of renewable energy will be key for Argentine exporting companies.

The development of renewable energies constitutes a fundamental pillar for the economic growth of both Argentina and the region, being one of the key components towards a true sustainable energy transition. The Argentine wind industry works to develop this potential, to be able to offer the market the possibility of accessing clean and efficient energy, accompanying the course followed worldwide.