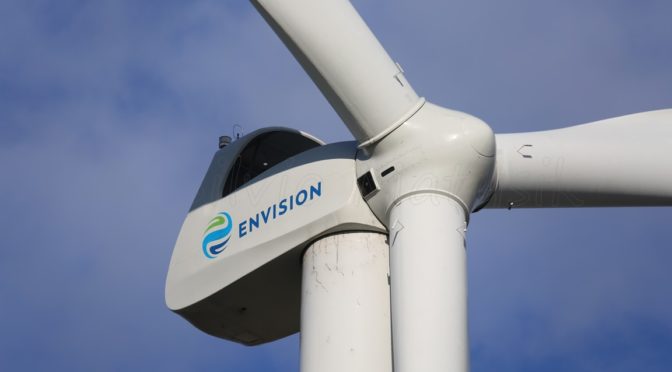 A wind farm with four wind turbines that contribute a total of 10 megawatts was opened in Bahía Blanca by a Chinese capital company that invested US $ 17 million.
The “García del Río” wind farm of Envision Energy Argentina, with Chinese capitals, is located at kilometer 38 of national route 33, about 40 kilometers from Bahía Blanca, in the south of Buenos Aires.

The opening ceremony was attended by the National Undersecretary of Renewable Energies and Energy Efficiency, Sebastian Kind; the mayor of Bahía Blanca, Héctor Gay; Envision executive vice president, Xibo Chen; and the general director of that firm for Latin America and the Caribbean, Rafael Valdez Mingramm, among others.

This is “the first technological investment in Argentina of Envisión Energy, a Chinese capital company and first of the four parks awarded to said firm in the framework of Round 1 of the RenovAr plan,” it was reported.

In this regard, Valdez Mingramm said: “We are very confident of the future of Argentina, the future of renewable energy and electrical energy.”

“Argentina has several great assets: its people, an unparalleled wind resource worldwide and has a need, which means that these types of investments come to join and motivate us to be here,” the executive added.
For his part, Gay identified that “this is the first park in Argentina with percent Chinese capital and for Bahía Blanca it is the ratification of having constituted in a short time a new energy matrix with renewable energy and being one of the epicenters of the country “.

“It is a source of pride that others will follow because in 2020 there will be more wind farm inaugurations within the Bahía Blanca district,” they added to the press.

Finally, Type that is “this park within the set adds up what we are today in Argentina reaching 8% on average, by the end of the year 10% of what the matrix is ??averaged”.

“This is a small park in size compared to others but it is an important part of what is the wind energy center in the province of Buenos Aires and in the country,” said the official.