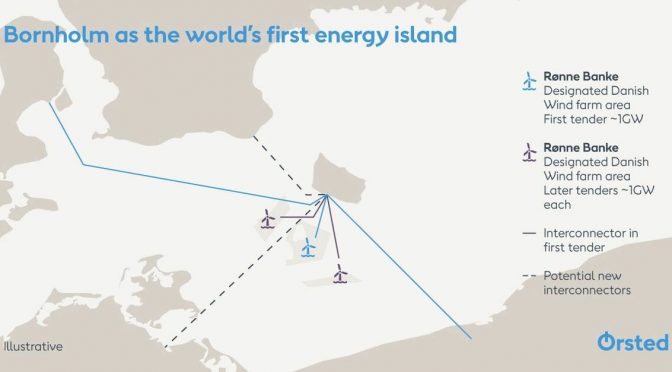 Offshore wind farm developer Ørsted has unveiled its vision of what Denmark’s first offshore wind power cluster might look like.
The company’s vision is to connect Denmark to two or three neighbouring countries, such as Poland, Sweden and possibly Germany, using the island of Bornholm as a hub and connecting up to 5 GW of offshore wind capacity to the island in the long-term.

The company said the plan would also make it possible to deliver on Bornholm’s vision of making the island carbon neutral, while also turning the island into a test site for new innovative solutions for the green transition.

The first step in the vision is to put an offshore windfarm of 1 GW at Rønne Banke southwest of Bornholm out for tender, and to connect Denmark and Poland via an interconnector.

The offshore wind developer said its vision “paves the way for the next phase in Denmark’s green transition, in which production of renewable hydrogen can make aviation, shipping and heavy road transport carbon neutral, delivering a decisive and necessary contribution to the Danish Government’s ambition of lowering Denmark’s carbon emissions by 70% by 2030.”

“The first steps towards realising the vision of Bornholm as an energy island is to design a tender, and we suggest that the tender includes both the offshore windfarm and interconnectors from Zealand over Bornholm to Poland in order to secure the technically best solution at the lowest price,” Mr Neubert said.

Areas southwest of Bornholm are reserved for government tenders of offshore wind, and in a study from April 2019 the Danish Energy Agency estimated the potential of these areas to be in excess of 3 GW.