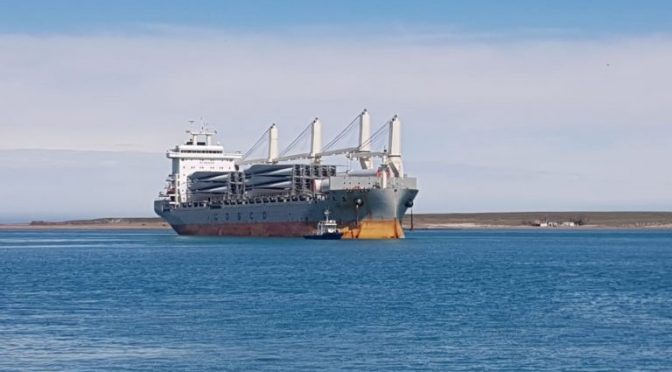 The Port of Desire is receiving wind turbines for the Cañadón León Wind Farm, located 5 kilometers from Cañadón Seco. The other two are in Koluel Kaike (The Hercules) and in Jaramillo (Bicentennial); The latter has been delivering energy for three months when it was inaugurated with the presence of provincial and national authorities.

The Cañadón León Wind Farm is the third of its kind in our province and will provide 122 megabytes of power from 29 wind turbines.

It is important to note that wind turbines are entering through provincial ports since the government’s management increased its turnover from 30 million in 2015 to more than 200 million in 2019. This week the first of the three ships that transport the total park will arrive. It is estimated that in December and January two more will arrive with the rest of the teams.
For the provincial State, it is another step in the permanent work that it has been doing to contribute solutions to the Santa Cruz and Santa Cruz communities and consolidate a future development with a province that becomes sustainable in itself.

It must be remembered that the electricity grid that interconnects the Park with the National Interconnected System is made with own funds that the government manages from the elimination of it from the national budget in 2019; and will demand an investment of 7MM dollars.